Somehow or other, I know not how, Harold is back in my life again. A year ago, I was in so much pain from the failure of my novel (something I poured my heart and soul into for five years) that I turned my back on him. I had to. I just wasn't able to go on.

But I kept my Facebook fan page up (which originally was an "ad"  for the novel), and just in the last little while, I got some views. Not many, just a small handful, but some, and better than the zero I got before! It had been a full year since I had updated the thing, but now that I have broken the  seal, I think I will go on with it. Click on the pink link above to see it.

I have literally thousands of photos of Harold saved, made hundreds of original gifs, and wrote well over 200 blog posts. I like to think the extremity of this (he went overboard in everything he did) would make Harold happy. It's starting to make me at least modestly happy again, though I do wish something would have happened with the novel. I still have  this kind of sad hope it will be made into a movie, but every inquiry I make lands with a resounding THUD. I still don't know what happened with Rich Correll, a close friend of Harold's who read excerpts from my novel before it was published and actually phoned me to express his interest, then for no discernable reason cut me off completely and  stopped returning my emails and calls. I think Annette Lloyd may have run interference here (a long story, which I won't tell now. She is a Tea Party Republican and supports Trump.)

The link is to a very old post written in my awkward early-blog format, and is long and sort of melancholy, but at least, like most things in my life, it is real. I cannot believe how long ago all this started, going on ten years! The way I see it now: I have all this material, and you (whoever you are. . . please be kind) haven't seen it in years, so stay tuned for some recycling. Hey, if I don't remember seeing it before, why would you?

This somehow did make me feel better. The moose just thrashes this thing. There's no contest. Not much information on the animal either, or what it is doing in someone's yard. Though all white animals are described as "albino", the dark eyes on this moose (albino eyes are always red) indicate a leucistic animal - I've dealt with this phenomenon before in other posts (see below). I don't often re-post things, but I like this one, it was a lot of work and got the usual 8 views, and it somehow seems relevant on a Friday morning.

If I had an alligator

If I had an alligator, which I'm not likely to do in the near future, I'd want it to look like this.

When you  see something white which is normally some other colour, you automatically think "albino". But no! My research tells me these are leucistic alligators, which means they have blue eyes (and the rest of them is ivory, not pure white). Big difference.

Leucistics are rare - I keep finding different stats on this, but one source said there are "only 12 of them in the world". I don't get this. Have they mucked and gumbooted through all the swamps of Louisiana in search of these "swamp ghosts"? Who knows how many are lurking under rotten logs, waiting to attack? The logic is that something like this would stand out like neon and wouldn't survive a predator's attack. But wouldn't an alligator be pretty handy at self-defense? What natural enemies does it have? It has survived for hundreds of millions of years without having to evolve at all. So does it matter if a handful of them look like the Pillsbury Doughboy?

Maybe it would. A white alligator hide might make tasty material for a Fendi bag. One of those purses that costs as much as the down payment on a car.

These guys are frightening, ugly and beautiful at the same time. While looking for appropriate images to make an animation (above), I found some beauties. Or uglies. 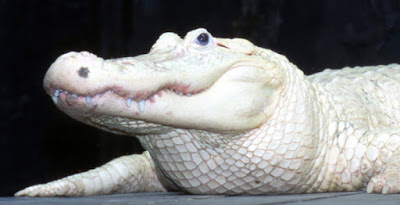 The blue eyes seem to peer at us with some kind of expression, but they don't. This creature's brain has just one setting: FOOD. (Well, two, but the other one isn't turned on all the time.) It looks at you as if you were food, which you are. If you have a pulse, if you have warm blood - or cold blood - you're food. Do we have some primeval memory of being eaten alive by some prehistoric version of this thing? Imagine how big they were back then, given that everything was on a ridiculous scale.

This one creeps me out majorly. It's either jumping up in the air in a ballet-leap, or underwater. How would anyone get such a shot without being eaten? 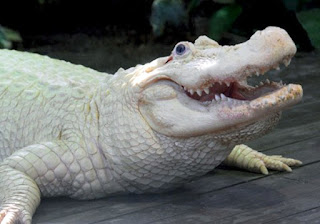 Don't ever think it's smiling. It's not smiling. It is jaws on legs. It is hissing and death-roll, and then, digestion. 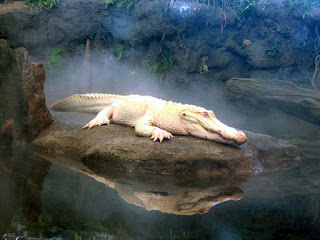 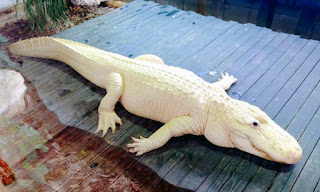 These three look almost poetical, except they're not. Once more I doubt the "only 12 in the world" statistic. Who runs around in the forest trying to find these? There must be more of them. Here's an extra one just lying around, basking on someone's dock. 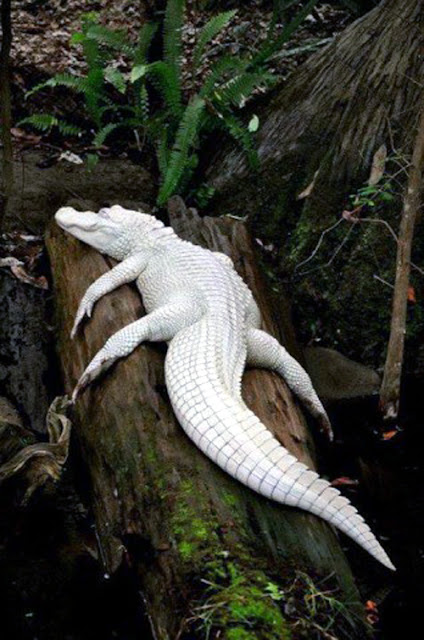 My brothers had an old stuffed alligator (crocodile?) with cotton batting in it (the cotton batting spewing out of its stomach and having to be shoved back in). It was a real alligator, or it had been, the skin tanned like leather. I never knew where it came from. The boys played Tarzan with it, and claimed that if you turned the alligator (or crocodile) over on its back and rubbed its tummy, it would relax and become extremely docile. This is a legend along the lines of taming a bird by putting salt on its tail. 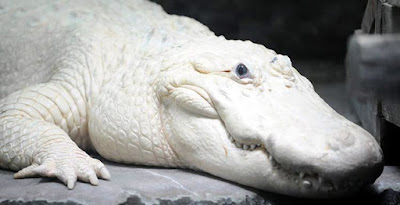 So the swamp ghost, the White Bite, the leucistic Fendi bag of Louisiana isn't a myth. Its only real enemy is humankind, which means it will probably be wiped out in short order, along with everything else.

That is the meanest face I have ever seen.

POST-SCRIPT. I never knew what I was getting into when I looked up alligator bags. I assumed they might top out at, say, $10,000.00.

But no. I found this in a post about The Five Most Expensive Purses In The World: 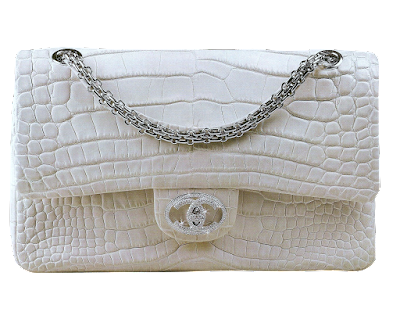 Next on our list is the The Chanel “Diamond Forever” Classic Handbag for a little more than a quarter of a million. It’s limited edition and it’s incrusted with 334 diamonds, white gold hardware and white alligator skin. And that’s only №4!

The description does not specify if this is from an authentic leucistic alligator, or just some old garden variety Wally Gator from a golf course in Florida who had a dye job. One would think the scarcity of the variety would preclude making it into bags, even for a quarter of a million dollars. Might it be that hideous vinyl stuff we had in the '60s, which would get so hot and melty in the sun?