I am a late-blooming Christopher Walken fan, meaning that I don't think I appreciated his oddness before. Now I do. Has that anything to do with my OWN late-blooming oddness? (Let me think.) But Walken transcends any category, and it was no surprise to me when I learned he is a classically trained dancer (pay attention next time he jumps up on a bar in that movie, that. .  .) and stage actor. Back then, actors had to actually learn their trade: dance, sing, enunciate, project, all while putting their individual stamp on their characters.

It shows in the performances.

Early Walken was almost surreally beautiful, with those lips, those eyes. . . Then he seemed to outgrow that baby-soft androgyny and became really interesting. Good bones are the key to an actor keeping his looks, and these Walken has, those marvelous cheekbones and, no doubt, a skeleton which is very fine indeed.

I have just sent away for a DVD of one of Walken's early performances, a very poorly-rated Israeli musical version of Puss in Boots. I want to see Walken as Puss (in Boots!) and see him dance cat-ly, which I can picture him doing. 'Til then, people, listen to him inhabit Poe's Raven as no one else, enunciating clearly yet naturally, and making the time-worn poem somehow seem conversational, like a particularly gifted Shakespearian actor bringing iambic pentameter to life.

I love his somehow-seductive Queens-ly vowel sounds, love his lack of melodrama, his deep understanding and ability to walk around inside this American epic (see him Walken?). The only thing I double-dog HATE about this video is all the crappy noise in the background. Almost everyone remarked in the YouTube comments section that the poem was marred by fake wind noises, wailing electric guitars, over-dramatic thumps and bumps. Ironic, because Walken always avoids that kind of shit himself. If I find an isolated vocal track of this gem, I will post it, but so far no. 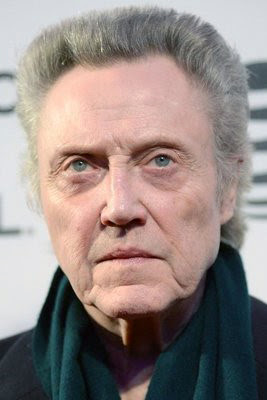 Aside from the worlds within his face, this I love about Walken: he says he never chases after anything. Unlike me, diametrically opposed to me who has flung herself bodily against brick wall after brick wall after brick wall, to gain only broken bones and soul-bruises while the walls stand laughingly whole, he doesn't chase work, he doesn't chase fame, he doesn't even chase women (he has been married even longer than I have). It comes to him. This is one spooky power, and it is beyond even self-confidence. It can't be manufactured. Bob Dylan had/has this same ability to magnetize, even with his extreme introversion and basic selfishness. People are sucked towards him helplessly, never knowing that the vacuum is actually inside themselves.

Posted by Margaret Gunning at 1:23 PM No comments: