Nothing is more entertaining than an evening of perusing the Facebook page for The Vintage News. The Vintage News has nothing whatsoever to do with ANY kind of news, vintage or not. It's a chopped-up mixture of Weekly World News/Believe It or Not-type article, with some random quasi-historical/scientific stuff culled from other Facebook pages and just sort of glommed in.

Usually the articles are boring and kind of pointless, except for the fact that most of them are written with atrocious grammar and spelling and seem to be bad translations from some other language (which I love dearly). But the comments! The comments are something else again, and are often highly entertaining because of the mentality of the readers - or lack of same.

I didn't even include the article, which was about Charles Darwin marrying his cousin, but oh MY - what a "discussion" it sparked about how the theory of evolution is "just a theory", there is no evidence for it, it has never been proven, so therefore IT CAN'T BE TRUE. There's also lots of indignation about how we don't "come from monkeys", which reminds me of Spencer Tracy thumping the Bible in that old 1950s movie Inherit the Wind. Things haven't come  so very far since then - I don't mean the 1950s, but 1925 when the Scopes Monkey Trial took place:

The Scopes Trial, formally known as The State of Tennessee v. John Thomas Scopes and commonly referred to as the Scopes Monkey Trial, was an American legal case in July 1925 in which a substitute high school teacher, John T. Scopes, was accused of violating Tennessee's Butler Act, which had made it unlawful to teach human evolution in any state-funded school.The trial was deliberately staged in order to attract publicity to the small town of Dayton, Tennessee, where it was held. Scopes was unsure whether he had ever actually taught evolution, but he purposely incriminated himself so that the case could have a defendant.

Scopes was found guilty and fined $100 (equivalent to $1395 in 2017), but the verdict was overturned on a technicality. The trial served its purpose of drawing intense national publicity, as national reporters flocked to Dayton to cover the big-name lawyers who had agreed to represent each side. William Jennings Bryan, three-time presidential candidate, argued for the prosecution, while Clarence Darrow, the famed defense attorney, spoke for Scopes. The trial publicized the Fundamentalist–Modernist Controversy, which set Modernists, who said evolution was not inconsistent with religion,[4] against Fundamentalists, who said the word of God as revealed in the Bible took priority over all human knowledge. The case was thus seen as both a theological contest and a trial on whether "modern science" should be taught in schools. (Wikipedia)

I've taken a few university-level anthropology courses, though I'm aware the field has exploded since then. The fossil record, which becomes more rich and complex with each new find, is slowly but surely illuminating the mystery of human origins, tracing them back to a COMMON ANCESTOR (not a monkey, you dummies!) which split into two groups before they even looked like monkeys. We looked sort of like lemurs back then, and before that, we were tree shrews.

We had to start somewhere. 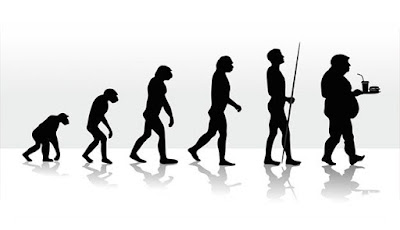 But the point is, connection led to connection in a multi-branched, incredibly complex pattern with many dead ends. The fact that people still blather on about "the missing link" just infuriates me, because that idea was completely invalidated in about 1918. It's just a "thing people say" because they know nothing whatsoever about anthropology or the evolutionary process. To rant against Darwin by thundering that "we didn't come from monkeys" is so simple-minded and the idea still so apparently prevalent that I honestly wonder if Trump will ever run out of supporters. 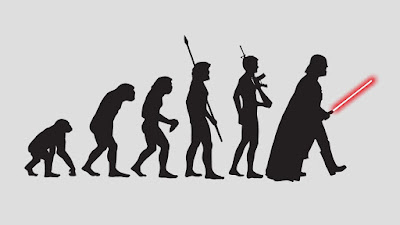 Keith Blackwell Lizzie Campbell so if you have a baby with a deformed hand or no legs... is that evolution?age

Ronald Redman Maybe you did fall out of a tree and landed on your head,their is no factual evidence man derived from a flipping monkey you twit

Rastko S. Ilić  His empty heretical theory had only one purpose: to separate humanity from Holy Christianity. As always

Nancy McIlrath Ok Vintage here you go again. How many times are you going to post this? I have seen 4 so far. I am a fan of Darwin but I suspect something else is going on here.

Ronald Redman Imagine you're a monkey playing in a tree, now you're a homosapian, wow...you can believe what ever floats your boat but sorry mam didn't come from a monkey.you have no proof whatsoever, to observe the truth look at his sponsors and channels of funds for his work and all will be clear.

Ronald Redman But still no evidence of evolution

Robinson Yost No, because science is not about proving things with absolute certainty, that’s not what science is about. So saying the theory of evolution means it’s unproven shows a fundamental misunderstanding of the word theory and the scientific process itself.

Posted by Margaret Gunning at 12:41 AM No comments: