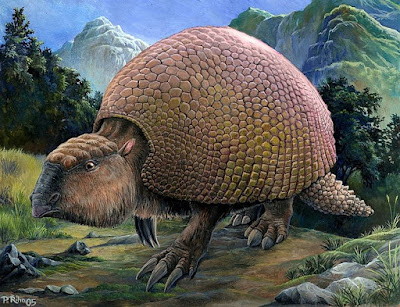 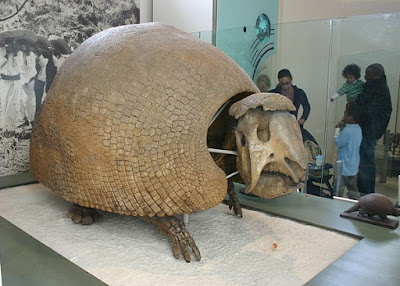 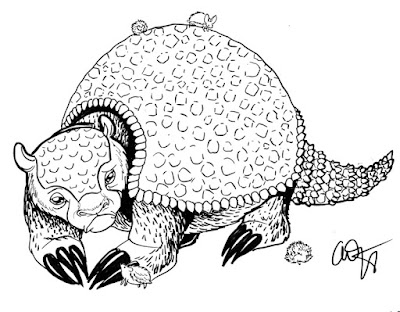 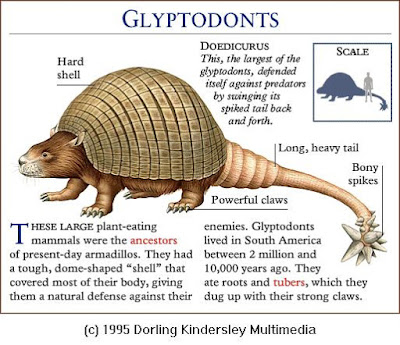 Glyptodon (from Greek for "grooved or carved tooth" – Greek γλυπτός sculptured + ὀδοντ-, ὀδούς tooth) was a genus of large, armored mammals of the subfamily Glyptodontinae (glyptodonts or glyptodontines) – relatives of armadillos – that lived during the Pleistocene epoch. It was roughly the same size and weight as a Volkswagen Beetle, though flatter in shape. With its rounded, bony shell and squat limbs, it superficially resembled a turtle, and the much earlier dinosaurian ankylosaur – providing an example of the convergent evolution of unrelated lineages into similar forms. In 2016 an analysis of Doedicurus mtDNA found it was, in fact, nested within the modern armadillos as the sister group of a clade consisting of Chlamyphorinae and  For this reason, glyptodonts and all armadillos but Dasypus were relocated to a new family, Chlamyphoridae.

Posted by Margaret Gunning at 12:06 AM No comments: