Posted by Margaret Gunning at 12:53 AM No comments:

Blogger's note. I am sorry to confront you with so many surprising facts all at once. I will attempt to refute them as best I can. This is from an extremely out-of-date article from back when Elizabeth Holmes was telling everyone she was a genius, and they believed her. I will attempt to refute these 21 surprising facts, or at least until I run out of steam or get bored and quit. (21? Are they  freaking kidding??) 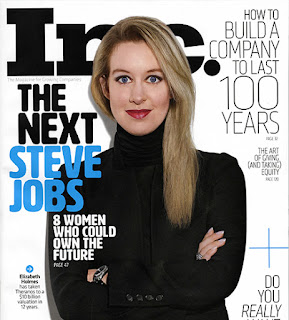 See how much you really know about America's youngest female billionaire.

It's really only in the past year that we've come to know and admire the world's youngest female billionaire, Elizabeth Holmes. Her incredibly unusual business strategy had her flying under the radar for more than a decade as she built her revolutionary blood-testing company, Theranos.

("Flying under the radar" is code for "covering their asses so they won't get their asses thrown in jail".)

Now Holmes is ranked No. 1 on the Silicon Valley 100, Business Insider's list of the most prominent (and coolest) people in Silicon Valley.

Here are 21 surprising facts you may not have known about America's coolest multibillionaire: 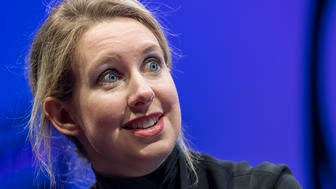 Holmes was born in 1984. Considering her already incredible achievements, that in itself is surprising to many.

(Um. I was born in 1954, and nobody runs around in circles because of it. When you were born isn't all that significant when you've committed such an astonishing amount of fraud. All it proves is that it's never too soon to be a criminal.)

At just 9 years of age, Holmes wrote in a letter to her father, "What I really want out of life is to discover something new, something that mankind didn't know was possible to do."

(Lies. Lies. Lies. She wrote that letter a couple of years ago. She quotes it during absolutely every interview. "See, everybody? See how I was a selfless, burning idealist even when I was a little, little girl?")

Holmes went to Stanford for chemical engineering, and during her time there, filed her first patent (for an advanced drug-delivery patch). She then dropped out of college just before her sophomore year.

She once traveled to Singapore to spend a summer working in the Genome Institute labs on groundbreaking SARS research.

Holmes was exceedingly private in the first 11 years of building her company. She's made a huge splash since appearing on the cover of Fortune magazine last summer.

Her company name, Theranos, is a combination of the words therapy and diagnose.

(Note. I prefer the similar term THANATOS, which is Greek for death.)

Since launching in 2003, Theranos has developed blood tests to help detect dozens of medical conditions, including high cholesterol and cancer, using just a drop or two of blood drawn from a pinprick in your finger.

(No they haven't. There is no Theranos. There is no blood-testing technology. Elizabeth and her henchmen hacked a Siemens blood-testing machine and stole its data after realizing their own equipment was about as useful as a toaster.)

Part of Holmes's inspiration came from her aversion to needles; her mother and grandmother even fainted at the sight of needles.

(Not true. Just theatre. Made up. Went over well with crowds. Sociopaths like to drill their way into your heart with warm-puppy, vulnerability-based bullshit.) 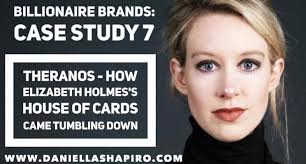 Holmes assembled what can be described as an all-star board of experienced and accomplished people in the corporate world: George Schultz, Bill Perry, Henry Kissinger, Sam Nunn, and Bill Frist, among others.

(Wait, well, that - yeah. Sugar Daddies, all. She batted her presumably-false eyelashes at them, wore tight sweaters - and by the way, those famous black turtlenecks were NOT in imitation of Steve Jobs, who wore crewnecks, which is a kind of t-shirt - and did whatever other favors they asked. Kind of makes you sick to think of 90-year-old men going all gaga over a sociopathic fake blonde.)

Holmes met Sunny Balwani, who would later become her company's COO, in Beijing the summer after her senior year of high school, during the time he was getting his MBA from Berkeley.

(According to Bad Blood author John Carreyrou, Sunny Balwani  is more like a bodyguard/thug or something out of a bad gangster movie. He does not possess the intelligence of a gnat. During that whole book, I never figured out what Sunny was doing there.)

Holmes is often compared to visionary Steve Jobs and told Mercury News she    launched her company after "thinking about what is the greatest change I could make in the world."

Like Jobs, Holmes wears a daily "uniform" of a black suit with a black cotton turtleneck.

Holmes has set her sights on more than simply dominating the blood-testing market; she wants to create a whole new market called "consumer health technology" that will see consumers more engaged in their health care.

(Oh Jesus, stop, stop, STOP! Her vacuous fake idealism is the worst of it. Holmes simply doesn't care. Nothing was real, none of it was real, and none of it bothered her in the slightest, including the very real danger that her fucked-up testing could cost human lives.)

As of last year, Holmes had 84 patents to her name (18 U.S. and 66 non-U.S.).
According to CBS News, Holmes spends every waking hour in her office and doesn't even own a TV at home.

(And you believed her! In light of what we now know, I am beginning to wonder just what she did all day.) 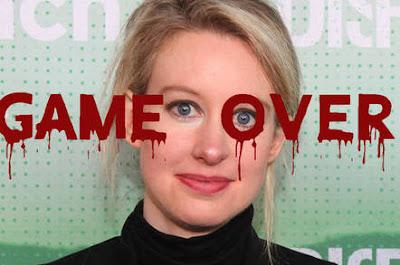 In March this year, Holmes became the youngest person ever honored as a lifetime member by the Horatio Alger Association of Distinguished Americans.

(Oh boy - get one of those long-arm stretch-out things with the hand on it, and snatch that award back! Horatio Alger is all about "rags to riches", but since when are riches necessarily tied to human decency?)

According to The New Yorker, Holmes "can quote Jane Austen by heart, [but] no longer devotes time to novels or friends, doesn't date, doesn't own a television, and hasn't taken a vacation in 10 years ... She is a vegan, and several times a day she drinks a pulverized concoction of cucumber, parsley, kale, spinach, romaine lettuce, and celery."

(I want to see that celery.)

She abstains from caffeine, limits the amount of time she sleeps, and works seven days a week (Insights by Stanford Business).

Holmes is notoriously secretive, and while she's been criticized by industry peers as such, insists she must protect her technology from the prying eyes of competitors.

(And. You know what else. Didn't work out, did it, Elizabeth?)

How things change in only a handful of years!

Posted by Margaret Gunning at 12:39 AM No comments: