Duet for French Horn and chair

Posted by Margaret Gunning at 10:51 AM No comments:


Posted by Margaret Gunning at 10:51 AM No comments:

Black and white in colour: the enigma of Jingles

One of the strangest things I've ever seen. This purports to be a Christmas cartoon, and has a Christmas beginning sort of stuck on, but after that it's just bad animation. But it's fascinatingly bad. It doesn't seem to have a label on it. It's one of those no-name things, like that atrocious Wizard of Oz cartoon that no one can trace.

I think this must have been a dry run for something, because it announces itself as A Musical Sketch in Color. Below the title is a reference to Mendelssohn's Spring Song - even less Christmassy! It's possible this was GOING to be a color cartoon, as it mentions something called Brewster Color, but it wasn't quite there yet, so "whoever" slapped a different label on it and hustled it out as a Christmas thing. It's shorter than most cartoons of the era, which were closer to eight minutes. 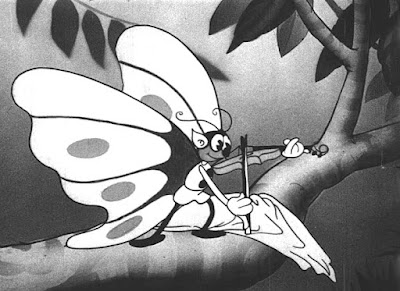 This has elements of Fleischer in that material objects constantly come to life, usually in the most florid manner possible. A train turns into a caterpillar, which turns into a violin-playing butterfly. A bug plays a spiderweb like a harp to impress his ladybug love. It's bad Disney, or worse than that, a badly-smudged copy of a copy of a Fleischer cartoon that wasn't quite finished yet, but needed to be released because the bank was about to foreclose.

I actually like bad animation, in moderation at least. I've watched this a lot of times because it's so odd, so incomprehensible. I can't find any backstory on it at all, except a couple of names that lead me nowhere. Not exactly giants in the field of animation.

If you ditch the Jingles, which never belonged there in the first place, and keep sifting through YouTube, you'll see that this was, indeed, a color cartoon by someone named Cy Young. The proper title was Mendelssohn's Spring Song. Young must have been a bona fide animator, though I can't find much about him. This cartoon appeared in several different places on YouTube, but  under the Spring Song title which did not match the only title I knew (the nonsensical Jingles). The main colors in Brewster Color appear to be red and green, so maybe the Christmas connection works after all. 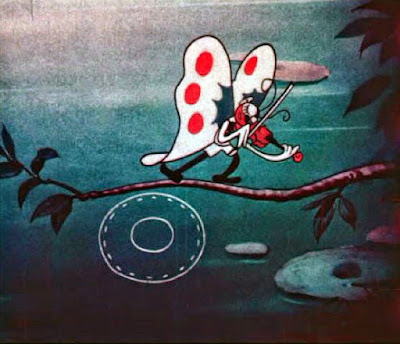 But look what else! This, from an old undated website written by an animation scholar:

Mendelssohn's Spring Song-1931- A "Jingles" cartoon (only one made) animated by (Sy) Cy Young and a handful of art students. Young went on to head the special Effects department at Walt Disney Studios, doing some amazing work on Snow White, Pinocchio, Dumbo and Bambi. Reportedly, this is the film that gave Disney the idea to hire Young. Animated in New York, it was the first animation experience for Lillian Freedman, who was the first woman to work as an animator in the Studio system, at Fleischers. Brewster color was a two-color process that was patented in 1931 but only used in a handful of cartoons. (perhaps this film was a test?) Young moved back to New York after the strike at Disneys, working on commercials. Shamus Culhane told a friend of mine (Les Brooks) that Cy changed his name to "SY" to protect his ethnicity (sy, after all, could be Sylvester!). Cy commited suicide in 1959. Transferred from the only known print. 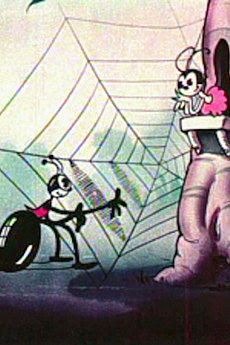 I am still confused by "A Jingles cartoon (only one made)", implying a series. But what kind of series: Christmas cartoons? If not, why is the theme music Jingle Bells? Some prints have two title pages, which is even more nonsensical. I wonder if this was ever shown anywhere. Or was it a sort of audition for Disney (which obviously worked)?

The tie-in with Disney and Fleischer interests me, because to me this just doesn't have the quality or charm of either studio. But Disney must have seen something in it, perhaps something he wanted and needed. Is it possible all those twittery florid nature cartoons sprang from this? Did he even invent the genre?

At any rate, Cy Young had a sad end. Though this snippet didn't say so, he was Chinese-American and no doubt felt the sting and limitations of racism. It's yet another anomaly that he changed his name from Cy to Sy. How would that disguise his Asian heritage? Cy isn't Chinese at all.

But this, at least, is something to remember him by.