Posted by Margaret Gunning at 7:04 PM No comments:

Racist thugs: can we still be friends? 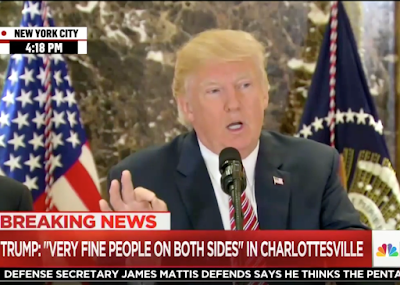 The article I have reproduced below came out over a year ago, but I notice the Globe and Mail has let it stand. And that shocks me almost as much as the content, which sickens me even more than it did back then.

It was in the form of a question-and-answer, the answer coming from some sort of tin-plated "expert" on something-or-other. The person asking for help had just poured out her soul in a cri du coeur about her literal survival and the safety of her children. The response from this weird Globe and Mail-style political Dear Abby was a bland little chuckle and a few light-hearted, conveniently stress-minimizing bon mots. 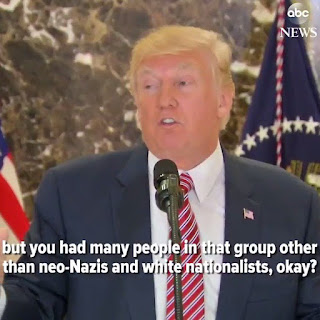 I guess by now you've figured out that this was about Trump. I was astonished and appalled at how mealy-mouthed the piece was, how blandly Canadian in the very worst, don't-get-anyone-upset way. Oh yes, I know this disturbs you a little, as it does me! Certainly. But don't, he advises, ever let the people who put this racist, sexist Tyrannosaurus in charge of the free world get you upset. And for God's sake, don't let it break up your friendship! Your friendship matters much more than all this silly political stuff. Use your healthy disagreement as an opportunity for lively debate over a bottle of chardonnay, while wittily quoting Oscar Wilde.

This article and its bland reassurance came out before the worst of Trump's henchmen/women oozed slimily out of the woodwork and took over - not just the country, but people's brains. But the anxious person who wrote to this supposed advice columnist could already see it coming. AND SO COULD HE. But he dodged it, hid behind the post, was "nice", and just wanted everyone to get along, no matter what the price. Writing for a Canadian audience, he was Canadian-nice in a way which I think might finish us yet. It's the one thing about my country which I positively hate. 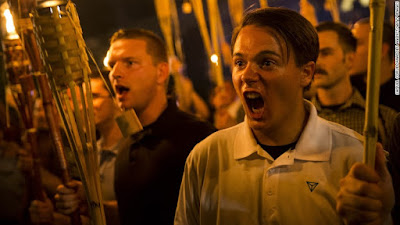 It made me sick then, and it makes me sick now. NO, you cannot separate someone's politics from the rest of them and just "be friends anyway". It's like those "very fine people on both sides" that Trump blathered about. You cannot, unless you completely lack principles yourself. To quote Katie in The Way We Were: "Hubbel, people ARE their principles." This caused Hubbel to groan and shake his head and go punch the wall.

Roseanne Barr has shown her true colors just lately, revealing what a racist thug she truly is, and could I be friends with her? You think? Not even if I did like her as a person and/or find her wildly entertaining, which I do not. I find this "love the sinner and hate the sin" type of thinking to be the most dangerous I have ever seen. Racism, bigotry and thug-like behaviour should never be "topics of lively debate". People who hold these beliefs are frightening and deplorable, what they do and say is morally indefensible and even criminal, and I want nothing to do with them. 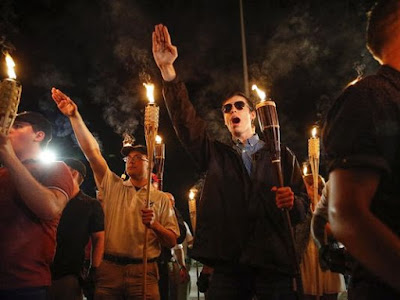 Don’t let The Donald come between you and your friend

I'm writing you from America – from one of what some people derogatorily call "the flyover states." I am so shocked, disturbed, and I would say even frightened that Donald Trump is going to be the next president of the United States. I feel like I'm living in an apocalyptic movie, and for the first time have a dread for my and my children's future. I can't sleep for worrying about it. I can't understand how any thinking, rational person could have voted for Donald Trump – and all (I thought) my friends and Facebook friends agree. But then I was at lunch with a friend of mine, and she was thrilled at the outcome of the election. She thinks Trump is going to be a great president. I couldn't believe my ears. We had an emotional argument and haven't spoken since. I don't know if I can be friends with her, going forward. What should I do? 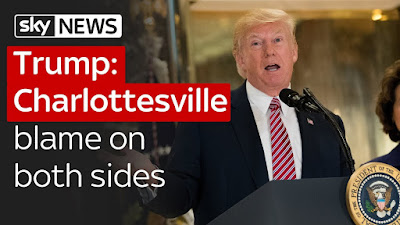 First of all, don't succumb to "confirmation bias."

Confirmation bias is the tendency to hang out exclusively with (and, I suppose it follows, sleep with and marry) people who agree with you, and to read things and absorb only the information that confirms your prejudices and beliefs.

And I think it's really boring. So everyone on your Facebook page agrees with you. Almost half of your fellow Americans, it turns out, don't.(emphasis mine)

Why must we all agree? Vis-à-vis Trump I say: True, he's not my type of guy. Obama was my type of guy – smart, funny, thoughtful, soulful, Fugees on his iPod, Entourage his favourite TV show – though not my favourite politician ever.

But give the man a chance. He might just surprise/shock everyone by
doing well. 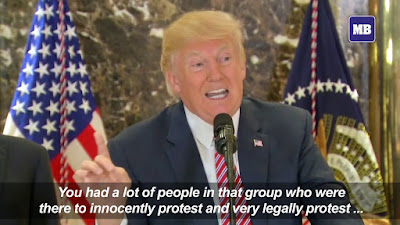 I've been around long enough to remember when Ronald Reagan threw his hat in the ring, way back in the 1980s.

The media were aghast, despondent, horrified and full of eye-rolling mockery: He's an actor! He was in a movie with a chimp! How's he going to be president of the United States (now glorified with the acronym POTUS)?

(Overlooking the fact he had been governor of California for eight years.)

But Reagan famously went "over the head of the media" and appealed directly to the common folk. And at least as far as conservatives are concerned, Reagan worked out well – left the U.S. and A (as Borat might say) and the world a more peaceful and prosperous place than when he entered the fray as POTUS. 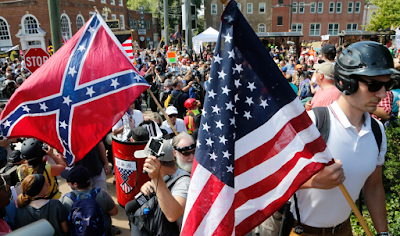 Anyway, the point is not what you think of Donald Trump, or even Ronald Reagan.

The point, I believe, is: it's important to hold on to and passionately argue for your beliefs, but not to go all ad hominem with them – i.e. not make it personal.

I'm always amazed at friendships, or any other kinds of relationships, that go pear-shaped over the fact the two parties don't see eye to eye on some particular issue. 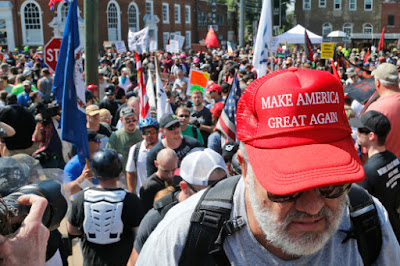 But why should it be so personal? Why should it not rather be a fun and energizing topic of debate?

I understand Trump is a polarizing figure. I understand his rise to power (first-ever president without any political or military experience, just for starters) is odd, unusual, shocking, etc.
But that's precisely why the ramifications need to be discussed among citizens in a cool, calm, compassionate manner. Take a cue from the concession speeches of Hillary Clinton and Barack Obama – I particularly liked Obama's comment (I'm going to miss that guy) to the effect of "this was an intramural scrimmage … We are Americans first."

You and your friend are Americans first. It can be hard, I think, particularly for Canadians to understand, but America is, at heart, I believe, a rebellious country, a country that began in rebellion – a punk country, if you will, and Donald Trump was a punk choice for president. 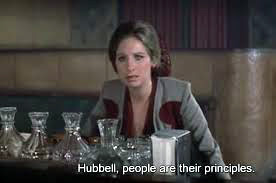 So it's definitely difficult to process, but shouldn't cause a rift between you and your friend. When one Oscar Wilde character says accusatorily to another "You always want to argue about things," the other character says "That is exactly what things are made for."

I've often felt the truth of that. And never more so than with Trump. Go ahead and argue about him until you're blue in the face and the bottle of chardonnay is empty.

Just respect the fact not everyone will always have the same opinion as you. And never, ever let it get personal. 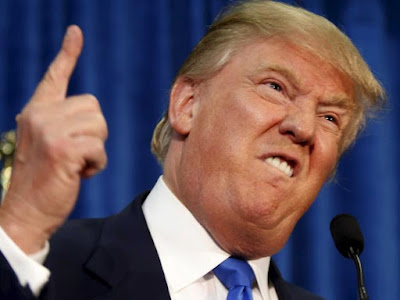 OK. . . I was going to leave it here, but I am gasping like a beached fish even after more than a year away from this bilge. For one thing. . . OK, there is no "one thing", which is why my highlighting escalated to the point that nearly every sentence he wrote was marked. This guy's flip, light-hearted, "hey folks, there's nothing really wrong here, you're just upset, OK? You're overreacting" tone sickened me, when the initial question was posed in an entirely different tone of fear, terror, dread.

Mr. Fix-It here completely let her down. He wriggled out. He began to speak in another language, breezy and dismissive, as in "oh, we've seen this before and it turned out great" (which is irrational in the extreme: if ONE thing goes great when we initially dreaded it, it doesn't guarantee the next thing will. And if he had to use the Reagan administration as an example of a dubious candidate who turned out to be a winner, then I have trouble believing anything he says.)

I don't know, I can't let this go, and didn't even know what images could begin to sum it up.
I decided to choose the absolute horror of Charlottesville to illustrate it, since I was really too overwhelmed to pick anything else. I wonder now, does this gentleman still feel Trump is "not so bad" and we're overreacting (and in my conspiracy-conditioned mind, I now wonder if he's "one of them", a spy infiltrating the fusty old Canadian institution of the Globe and Mail) and that people should only debate about him in a cool, rational, detached manner while slowly getting more and more pissed? I hear the sound of genteel, probably phony laughter, Oscar Wildean witticisms flying through the air, while the world as we know it slowly and inexorably sinks.

Posted by Margaret Gunning at 12:59 AM No comments: