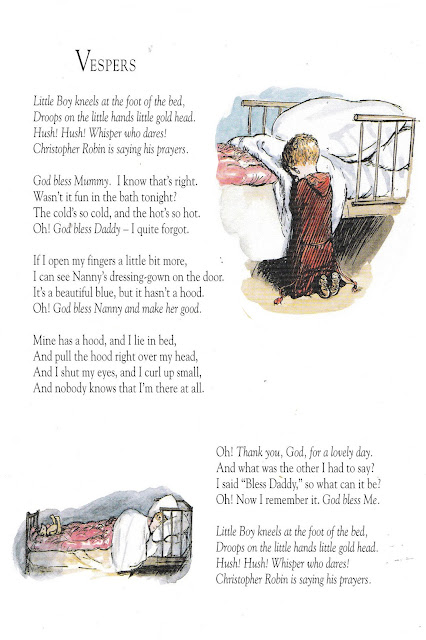 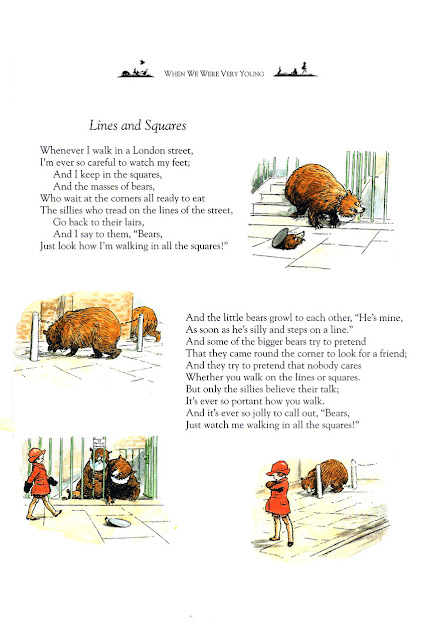 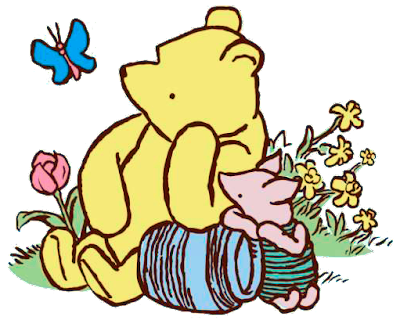 I find it interesting, if not fascinating (now that I think about it, which I never have before because the poem seemed so soppy) that Christopher Robin is praying for the same reason anybody else prays.

It's interesting too just what he is afraid of, as is made evident in the second poem.

Why would A. A. Milne choose bears?

It seems obvious when you look at it. In putting his own small son at the centre of stories which made him wildly world-famous, he was throwing him to the bears, if not the wolves.

Never mind that his Winnie the Pooh was a "silly old bear", a "bear of very little brain". He was still a bear. The "Lines and Squares" poem refers to them as "masses of bears", one of the most disturbing images I've read in a long time. 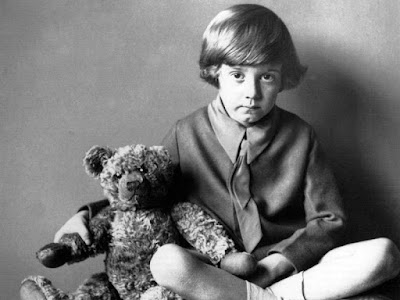 It's well-known that Christopher Robin Milne was relentlessly bullied in school for his fringe-haired Edwardian alter ego. In all the photos of him clutching his famous bear, he looks unutterably sad, even frightened. It's also been said that his appearance was altered to make him look more like the innocent Ernest Shepard illustrations, instead of the other way around. Get out the scissors, trim up that fringe! Think how that must have played out as he grew up and left tender childhood behind.

Why do people use their children that way? The same reason anyone uses anyone, I guess. Selfishness, ego, human ruthlessness, narcissistic disregard for the wellbeing of one's nearest and dearest. And in the case of writers, a single-minded and overwhelming desire to be famous.

To me, the most chilling lines in that whole chilling poem are:

"Mine has a hood, and I lie in bed
And I pull the hood right over my head
And I shut my eyes, and I curl up small,
And nobody knows that I'm there at all.

This sounds like someone who is hiding. Hiding from what? Bears, the boogeyman, God? His own father? Or is it from the fictional Christopher Robin, a menace so inescapable that he can't get away from him even in the safety of his own bed?