Satanic meanings in Pebbles and Bamm Bamm's Let the Sunshine In

LET THE SUNSHINE IN! 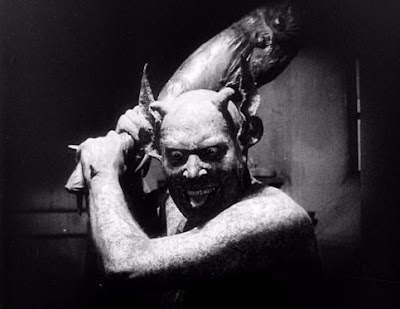 Blogger's attempt at explanation. Like everyone who watched The Flintstones (and everyone did, though its sappiness now astounds me), I remember this saccharine little duo with Pebbles and Bamm Bamm. The fact both of them were maybe eight months old and incapable of speech made no difference. There they were, suddenly sitting upright and performing this cheery little song, and to my ears then, that's all it was: a sappy little number sung by two sped-up chipmunk voices.

When I first discovered the words on YouTube, I was disbelieving. It couldn't be about the devil, could it? So I looked it up on Wikipedia, and to my astonishment, there it was:

"The most famous recording of this song was created for baby-boomers and featured Pebbles and Bamm-Bamm on The Flintstones "No Biz Like Show Biz" episode (which originally aired September 17, 1965). The clip of them performing this song was sometimes played during the closing credits in the show's final season (1965–1966), this episode being the opener of that season. Although Pebbles and Bamm Bamm went on to form a rock band as teenagers in the 1970s, they never approached the classic heights of their early childhood tune. The Flintstones version of the song was not stripped of its religious lyrics for inclusion in the show, and only the word "kids" was substituted. Original vocals were provided by Rebecca Page (as Pebbles) and her mother Ricky Page (as Bamm Bamm), who later became "The Bermudas" and then "The Majorettes".

OK. So where exactly did this bizarre little ditty come from?

The first recording was called Open Up Your Heart and was performed by the Cowboy Church Sunday School (and don't ask me to tell you what THAT was). It was the sort of quasi-Christian song that was popular back then. I remember a lot of kids' TV shows ended with the host saying, "And remember, kids. . . always say your prayers." Prayers usually meant kneeling beside your bed with hands together, saying something like, "Now I lay me down to sleep/I pray the Lord my soul to keep./If I should die before I wake/I pray the Lord my soul to take."

Such a pleasant thing to recite before sinking into sleep, the possibility of death! No one seemed to think of these things and the effect they would have on children emotionally and spiritually. The whole thing was based on fear. Bland white Christianity was applied across the board in the culture as something which went without saying, and I remember everyone reciting the Lord's Prayer at the start of the school day.

But this little song is a lot more extreme.

Two little cartoon kids singing about "the devil" is extremely creepy, even if the song is already known in the popular culture. There are still parts of the world - hell, parts of MY world, not just the Southern U. S. - where this sort of philosophy would not be at all out of line. It seems to me it's meant to scare the hell out of kids, or at least force them to look cheerful all the time for fear of  Satanic reprisal. A very strange idea indeed.

Just a little piece of art I did

Posted by Margaret Gunning at 12:45 AM No comments: