Who is the Mystery Cat? 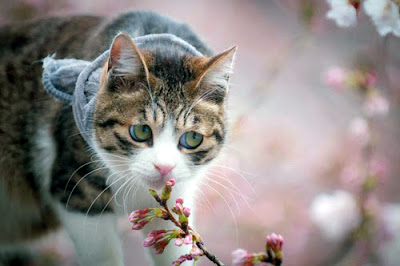 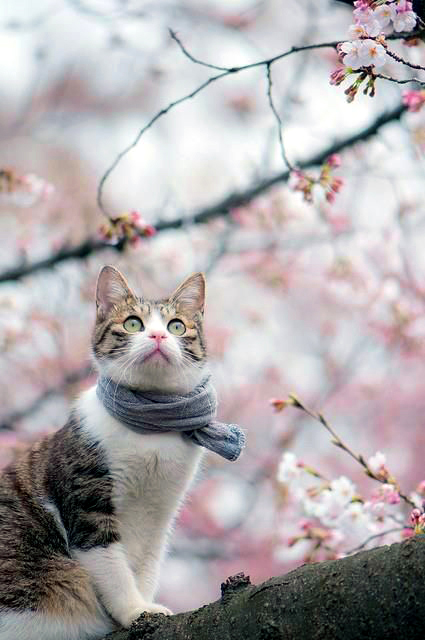 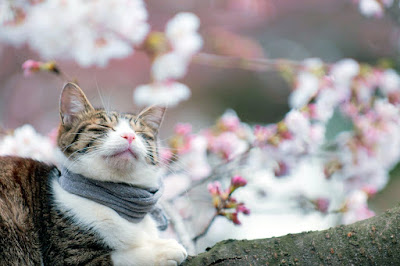 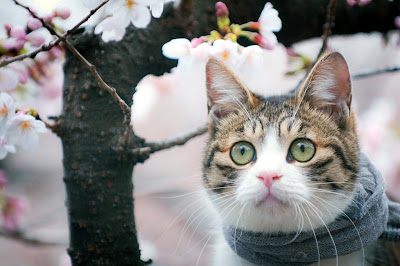 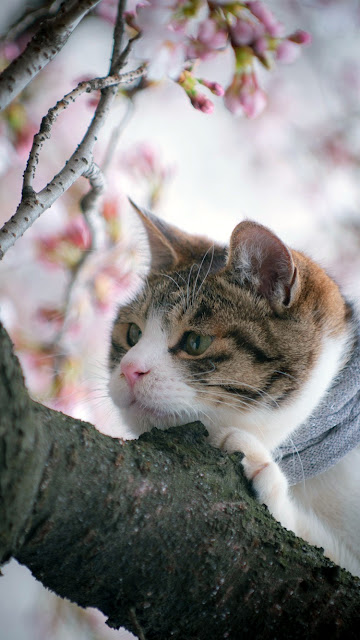 The infuriating thing about the internet is that it gives with one hand and takes away with the other. Every year when I start trying to find spring-themed wallpaper, I see. . . this cat. No, I mean THIS cat, this solemn-looking tabby-with-white cat with the unusual grey scarf (and who puts a scarf on their cat?). I thought I was imagining things at first, but then I found more and more shots - well, five of them, but five shots of what is obviously the same cat in the same cherry tree.

OK then - who took these, when, and where? Ever since the devouring dragon of Pinterest, the provenance of things has become impossibly muddy. It seems anyone can post anything at any time, with no restrictions whatsoever. There is no such thing as asking permission. It's a free-for-all. Only the odd time do I find a restricted site where things can't be downloaded or copied. But why aren't there more? If some people can do it, why don't all of them, or at least real photographers and artists? 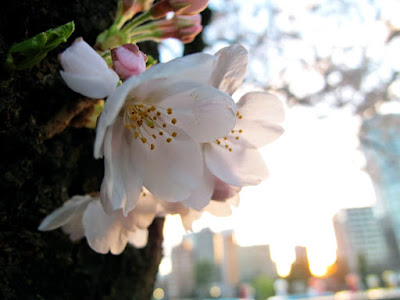 I'd like to know who this kitty is, if he's alive still, if he's from Japan or Victoria or wherever-else cherry trees flourish in the spring, but I'll never know. If I try to go on TinEye or Google Reverse Images, all I get are endless replications of the same image, all different sizes and under different names from various websites. So they've been borrowed and swapped and passed around over and over and over again, so many times that the origin is lost forever.

But it intrigues me. Here is this cat, this unknown cat who shows up on wallpaper everywhere, who is sort of famous in his own way (or her own way), even though s/he doesn't have a name or a location or an owner, or even a photographer. It's the Mystery Cat. The Hidden Paw, like in the poem.

So now I spend quite a bit of time trying to find a sixth picture. There may be one, or even more. It seems to me I remember more than five, from my other searches. Damn. Another obsession - I thought I had come to the end of them.

Posted by Margaret Gunning at 12:08 AM No comments:

I made a one-minute gif of this animated intro to a show from 1979 (Turnabout) that may not even have aired. I'm not sure. I know it didn't last a full season. It's one of those body-switching things where people trade souls or whatever, or trade bodies (or whatever). The animation is so bizarre that I don't think it even needs a sound track. These people are in love, see, but they hate each other because each thinks the other has a better life. So presto, change-o, they wake up in the morning and they "are" each other! The comedic possibilities are endless, but I can't find out much about this show, so I doubt if it was a big hit. Perhaps this impressive one-minute gif is the best part of it, after all.

I just found an episode guide! Seven episodes were made before this thing sputtered to a halt, the series' producers blaming a bad time slot. This has me as excited as finding all that stuff about Calucci's Department!

1. Pilot episode: A cursed Gypsy's statue causes Sam and Penny's spirits to take flight and exchange bodies after they made an idle wish, each believing that the other has the better life. Now Sam is his wife and Penny is her husband.

Penny's old boyfriend shows up with a job offer that Penny hopes Sam won't refuse now that he literally speaks for her. Sam suspects that the ex-boyfriend is more interested in Penny than in business, and he's in a perfect position to find out.

Penny informs Sam that her former body's "monthly visitor" is late; Sam goes to the gynecologist to find out if "he's" going to become a mother.

Sam and Penny prepare to participate in a charity touch football game, only Sam is now the cheerleader and Penny is the quarterback and neither has a clue on how to perform the other's role!

Penny's family comes to visit on the occasion of her sister's wedding, and masculine-minded Sam has to be the daughter/sister instead of Penny, to Sam's annoyance and Penny's disappointment.

Sam is invited to a fraternity reunion, and the wives are not invited. Too bad Penny is now occupying Sam's body and is the one to get the news! So they both return to Sam's old college for a wild reunion.

The magical statue is stolen! Will Sam and Penny be cursed to stay in each other's bodies forever?

(Apparently not. The magical curse which was the premise of the show ended on March 30, 1979.)