DAM! Why did I throw away my trolls?

For those who have had even a passing connection to the original "Dam things" that swept the toy field in 1964, this is addictive stuff. When I googled Dam trolls, this is what I got, and I was amazed to find you can still buy these things for a fairly modest price.

That is. . . you can buy the clothes. The above sumptous outfits, created by an Etsy vendor called Lucretia's Lair (link posted above), blew me away: they were the nicest doll clothes I've ever seen, even with the bizarre squatty proportions of a troll doll. 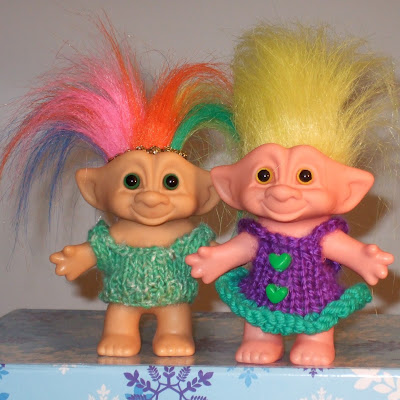 Having fiddled around with dollmaking for years, I've tried to make troll clothes myself, with varying degrees of success. The photos I've posted here are the result of my current efforts. The things have the weirdest body proportions of any doll, with no waist, hardly any chest, and a prominent pot belly.

Why I've taken another crack at all this mystifies me. It's trolls again, and I don't know why.

Am I trying to recapture a childhood passion, or what? From the first troll I bought in 1964, a "Dam thing" with the famous authenticating DAM engraving on the back, I had something that far surpassed a mere doll (and I hated dolls back then, never played with them). There was magic in it. More than one girl friend "played trolls" with me, though we never played Barbies and were disdainful of them. Most of us had a fair collection, from Dam things to Wishniks to cheap knockoffs with straight, shiny orange or black hair. The main difference among trolls was hair colour, except that. . . they had. . .  personalities. 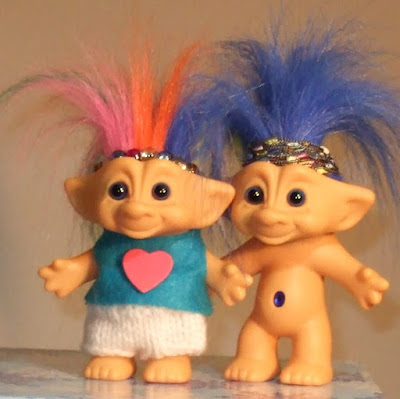 I gave mine names. I remember a set of twins named Trollina and Trolletta. One was called Fundevogel, another one Fundindelve. I'm not sure where I got those names, and I am sure I didn't know what they meant. In fact I just looked them up now and found out Fundevogel is the title of a Grimm's fairy tale, and Fundindelve is a place name in old English witchery.

One was named Grundoon, after an obscure character in Pogo (a baby woodchuck that looked exactly like a human), his nickname being Grunny. I had a silly verse I said at breakfast:

"Toast and honey
Warm and runny,
Give it to Grunny!"

One was named Babbine, though I don't know why. These trolls did something to me. 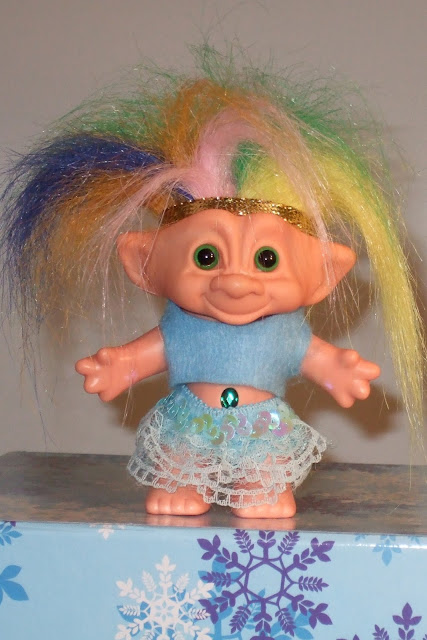 A friend who lived far away had a black-haired troll named Venus La Mer - this one had the thick lavish lambs'-wool hair the original Dam trolls had, and it was spectacular. I had a grey-haired troll named Ludwig (loosely based on Beethoven, whom I loved, more in person than in music). They wrote love letters to each other. In a final act of sacrifice, my friend mailed Venus to me, and the two were married.

After that, I lost interest.

I lost interest even when my parents bought me an enormous authentic Dam troll, about ten inches high, complete with a Scandinavian-looking wardrobe. I named her Glumdalklitch after a character in Gulliver's Travels - the movie version, not the book, which I had never read. What I remember about her is her smell - a sweet, light vanilla scent. The other trolls smelled like damp wool and vinyl.

What happened to my collection? I must have gotten rid of it, though it would be worth a small fortune now. I just outgrew it, or something. I don't know. No more playing troll games, no more weddings or impressive literary references. I scream to think of it now. Then, back in the '90s, probably when they were experiencing a modest uptick in popularity, I bought a single troll and tacked it to my bulletin board by its hair. It stayed up there until I moved office, then got thrown into a box. 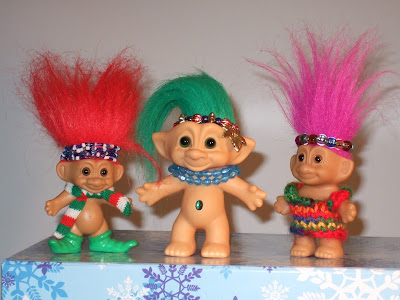 I still have it. It's a sad little thing, so far from a Dam troll that it's a wonder anyone bought them at all. There were a few events in between: I received a gorgeous basket of jams and candles and other Christmas goodies that had two trolls in it, gaily decked out in curly-toed shoes and striped scarves. They were relegated to the garage, and then during one of my periodic purges, I THREW ONE OUT. Just one. I kept the other one. This is sort of like a mother putting one twin up for adoption. Those Christmas trolls are now collector's items because they were only made for that one year. I feel a weird longing for it now, a longing I've never felt for any other childhood object.

As a matter of fact, finding any sort of troll at that point was well-nigh impossible. In one of their weird periodic disappearances, they vanished back into the Scandinavian twilight. 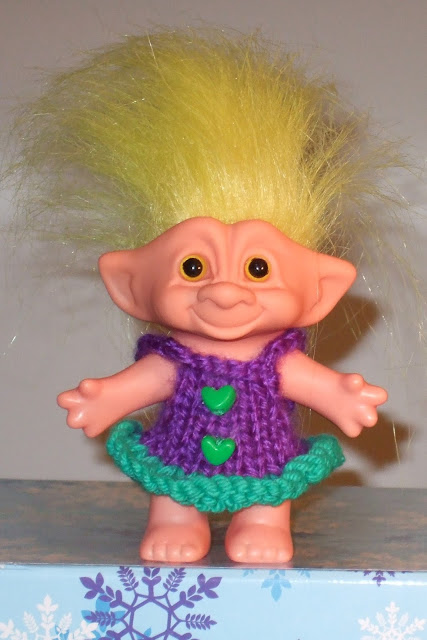 Life rolled on, and once again I forgot all about the subject - until I was in the dollar store one day, and saw. . . trolls, in plastic bags, for only $4.50! They were bland-looking and had fake jewels in their belly buttons, but I just had to have them. I immediately bought several, but they kind of got stashed after a while. Two or three years went by, trolls disappeared again - do these things have some sort of power to materialize and dematerialize? Apparently so, for last week, while looking for something else, in that same dollar store, I stumbled on four or five jumbled-up boxes full of trolls.


I now have eight trolls. That doesn't sound like very many, but I have another one coming in the mail. This one is closer to authentic, at least, unlike the little lumpkins that sit on my desk (looking so alike that they resemble a family of Mormons on a picnic). I found it on eBay, priced in Canadian dollars. And there was no shipping and handling! I could be hip-deep in trolls by now without shipping and handling, which is often double the price of the troll.

I'd like a baby troll, preferably diapered and crawling, and an oversized troll, though of course not the size of Glumdalklitch. (There was only one Glumdalklitch.) I don't want anything two-headed and ugly. An original DAM would be nice, but I don't think I'll find one in my price range. Most of them have been refurbished, as the hair (natural lamb's wool) has a tendency to rot away after a while. New hair probably costs more than the troll.

The thing that's compulsive about collecting is the seeking, finding, ordering and waiting. The box opening is a huge thrill. After that, it can be a little disappointing. And then it's on to the next acquisition. The next troll is always going to be better, somehow. And then the next.

UPDATE. I got my new troll in the mail, and she is wonderful. She has a much more expressive face than my dollar-store clones (not that I don't love them!). So now I'm thinking about. . . see, Etsy has a special, three for one, and they're those oversized Dam trolls like I remember! A girl has to have a hobby, right? And hobbies cost money, don't they?

I now have nine trolls.