Man run over by steamroller

Posted by Margaret Gunning at 11:07 PM No comments:

Email ThisBlogThis!Share to TwitterShare to FacebookShare to Pinterest
Labels: man run over by steamroller

I am sure I have posted this before, but it deserves a second coming. This is one of those evangelical preachers who gets all worked up into a dancin' fervor, probably speaks a little tongues while he's at it. I think his name is Rodney Howard-Browne, and he was instrumental in that Toronto Blessing movement which always struck me as an offshoot of the Holy Rollers. They used to talk about people doing "carpet time", which could have many meanings. And far from just speaking in tongues, which is just a lot of yabba-dabba nonsense, they'd roar like lions, cluck like chickens, and probably made hippo noises too. Then the whole thing died out, and is now just a major embarrassment to the church. Kenneth Hagin has the most extreme examples in his "holy ghost camp meetings" - you-all can check it out on YouTube if you want some real entertainment.

Posted by Margaret Gunning at 11:05 PM No comments:

What, what, WHAT? The mystery cartoon

This is one of five thousand or so gifs I've made and stashed away over the years. Looking for something else in a file, I found it again. Obviously it was taken from an old cartoon, likely on YouTube. But now I'm curious as to WHICH cartoon, from which studio, or at least the name of the cartoon or the name of the series, or the year, or something.

More than once I tried to dig up the source of this few seconds of quite compelling animation. You can imagine the search terms I've tried! But it has availed me nothing. 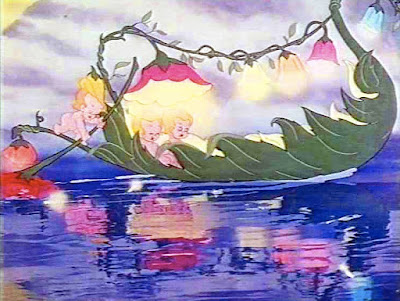 It's just such a strange thing to animate, and I think it's done very well, but WHO DID IT? I'd say Disney, but he wasn't the only knife in the drawer back then, not with Fleischer and Van Beuren and Ub Iwerks and Paul Terry and many others, turning them out regularly to run with feature films.

I'm mesmerized by this thing. I don't even know if the YouTube video is still up. It's SOOOO frustrating when you go on a wild goose chase to find an old video you loved, only to come to the pitiful realization that it doesn't exist any more.

I have sent an email to one Jerry Beck, an animation historian, with this gif attached, so we'll see if we get anything back. If HE doesn't know, I don't think anyone will.

Next day: MIRACLE OF MIRACLES!!

I opened my email this morning, and here is what I received:

Not only did Jerry Beck get back to me in about 6 hours, he gave me exactly the information I needed, plus a link to the actual cartoon, above. Thus I was watching it within seconds, including that incredible floodgates sequence.

Who DOES this? Who answers an email right away, when the entire Lloyd family, not to mention Rich Correll, treated me like I didn't exist? Wouldn't even give me a "no" or tell me they despised the very idea of my novel? Gave me worse than the cold shoulder? And this after what looked like initial curiosity and interest. This crushed me more than I can even say, and sometimes makes me think I have thrown away about five years of my writing life.

Postscript to the postscript. This is the sad part. No sooner had I jumped for joy on rediscovering the mystery cartoon than it was pulled off of YouTube on some obscure copyright grounds. All I can think of is that Strauss' Blue Danube Waltz is no longer in the public domain, even though it is heard everywhere, on TV, radio, movies, the internet, YOUTUBE, etc. etc., or at least it is not available to be used with a cartoon. Stupidest thing I ever heard of, BUT, before it was pulled I did manage to make the longer gif out of the floodgates sequence. So you still got to see the waterfall pussy. But the timing seems suspicious, somehow.

Oh, and. There's more. In trying to track down another version of this lost cartoon, I actually found one:


It seems ironic to me that while the cartoon has been pulled for copyright reasons, THIS version of it, obviously pirated, will likely stay.

Posted by Margaret Gunning at 11:00 PM No comments: