A Fata Morgana (Italian: [ˈfaːta morˈɡaːna]) is an unusual and complex form of superior mirage that is seen in a narrow band right above the horizon. It is the Italian name for the Arthurian sorceress Morgan le Fay, from a belief that these mirages, often seen in the Strait of Messina, were fairy castles in the air or false land created by her witchcraft to lure sailors to their deaths. 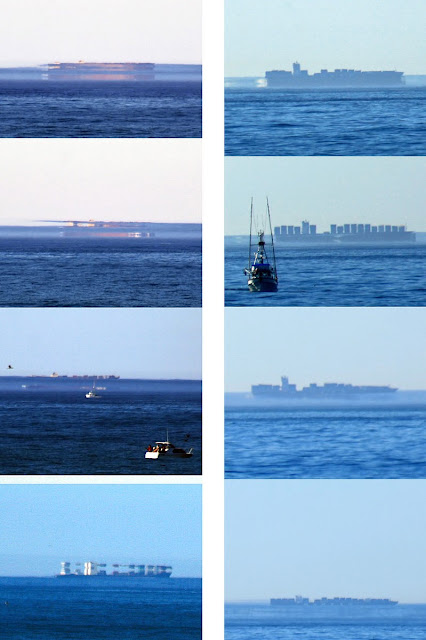 Fata Morgana mirages significantly distort the object or objects on which they are based, often such that the object is completely unrecognizable. 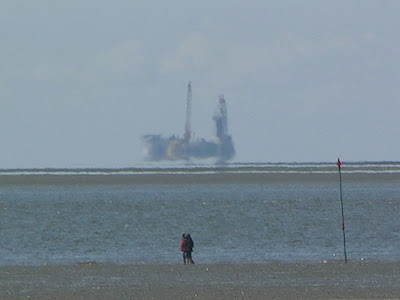 A Fata Morgana can be seen on land or at sea, in polar regions or in deserts. It can involve almost any kind of distant object, including boats, islands and the coastline. 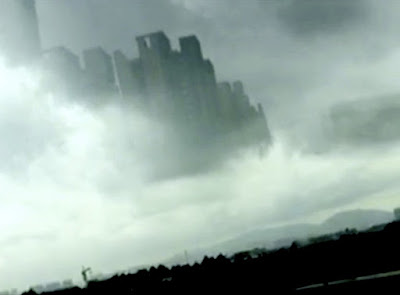 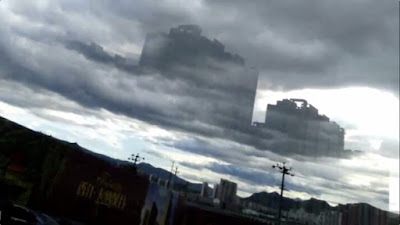 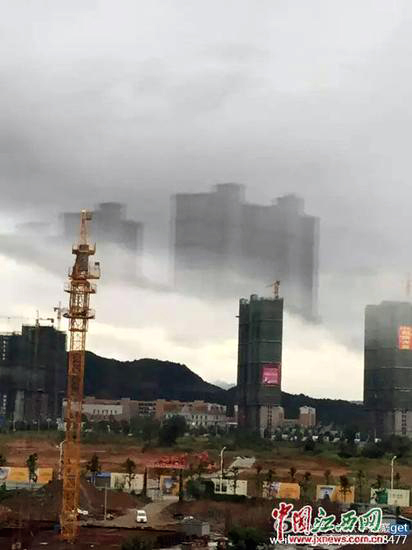 A Fata Morgana is often rapidly changing. The mirage comprises several inverted (upside down) and erect (right side up) images that are stacked on top of one another. Fata Morgana mirages also show alternating compressed and stretched zones. 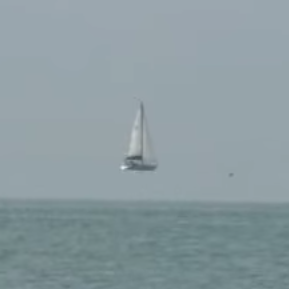 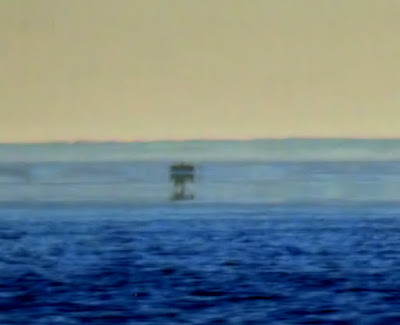 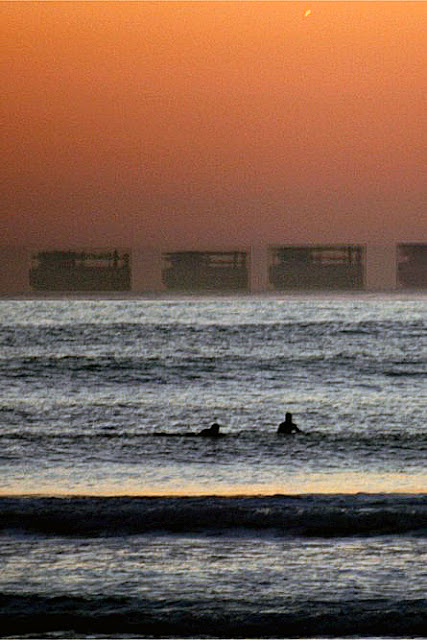 BLOGSERVATIONS. I knew something about mirages, but I thought they were those things in the desert, where you see water and palm trees on the horizon and by the time you run to them, they're gone. Saw it in a Popeye cartoon or something. But the Fata Morgana is something quite else.

I seem to remember, in certain films, seeing something above the water, something weirdly shimmering that kept changing size and shape. It seemed to melt, stretch and reform like a strange liquid. Sometimes you could see through it. These things likely freaked out those sailors of antiquity, just as they freak out people today. Pirate ship? Imminent attack? One can see where they might be mistaken for a UFO.

A boat can suddenly project itself upward so that it appears to hang in the sky, morphing from an elongated shape to a blob to - nothing. The marine mirages make sense - sort of - because of all that reflection on the water. But what about the ones on land?

Wikipedia tells me (and how can Wikipedia be wrong?) that a Fata Morgana can be almost anything: an island, a mountainside, a mountain GOAT if you could get a goat to hang upside-down. But how about whole cities? The photos from China appear to show tall buildings supended above the clouds, leading a lot of people to cry "photoshop!" Then how to explain the video of the same phenomenon? Who could have created that?

All this comes from the Land of the Strange, that country in which I am a cliffdweller or sharecropper or part-time lover. It's all very well to say "it's just a trick of light". Simple physics. Physics is a strange thing, however, and some time I'll post something about the overtone chanting of Tibetan monks, which is, quite literally, a chord coming from one person's throat. The way the sound leaps all over the musical spectrum is downright spooky, and seems impossible.

Do we believe our eyes, and if we don't, what do we rely on? Physics? Upside-down boats (or goats), or castles in the air? And did anyone in that eerie floating city in China happen to look down?

Posted by Margaret Gunning at 12:43 AM No comments:

I didn't know whether to laugh or scream when I heard this, so I did them both at the same time. It reminded me of nothing more than Rusty in Orchestraville, which I uploaded on my YouTube channel quite a long time ago (see below).

Peter the Piano is the only instrument that DOESN'T speak in this horrific method of child musical indoctrination. The others "speak" through the miracle of Sonovox, a method which pipes musical sounds directly into the larynx via a small speaker. The person is force-fed the sound, so to speak, then kind of verbally vomits it up. Thus the clarinet or flute or violin or whatever appears to "speak". It doesn't, of course - it sounds stringy and miserable, not to mention creepy. But back in the 1940s, it was the wonder of the ages.

There is a newer, much hipper version of this called a talk box, but I think it's the same deal, the sound of the instrument magically vomited up. Or projected, or broadcast, or whatever it is. The talking piano is much more scary, its "voice" freaky beyond belief. It has to be programmed in a sort of elaborate way. I don't know why anyone would ever want to do this. The piano is a piece of furniture designed to hold up flower vases and look decorative. Anything else is overkill.