Posted by Margaret Gunning at 10:38 PM No comments:

Don't you wish you could do this?

Having absolutely no ability to draw, paint, or make any sort of art, seeing even this kind of clever doodling impresses me. I don't know how people do it. It must be innate, like being able to see maps in your head or doing feats of mathematics without a pencil. I can only look on in awe.


Posted by Margaret Gunning at 10:36 PM No comments:

There was this duck, see, and all I could see was its ass. It went on that way for a long time, so I filmed some of it. The duck's feet were coming right up out of the water, a strange sight, so its bill must have been touching the lake bottom. As humourous as all this is, it's a sign of something not-so-funny, and we all know what it is. Climate change affects everything, from falling lake levels to tropical storms, not to mention forest fires. We separate them out, push them away from us - because don't we have to laugh, once in a while? Especially when a duck keeps showing its ass.

Posted by Margaret Gunning at 10:33 PM No comments:

Amazing predictions! (and why none of them came true)

This series of weird futuristic paintings was done around 1900, in an attempt to project an image of that War-of-the-Worlds-sounding, impossible date: The Year 2000. The strangest one of these has to be the device that fits on the kid's head to force learning into his brain. I guess back in 1900 or so, they predicted information would be beamed in directly, perhaps through electricity, or injected like so much brain juice.

These are interesting, but of course almost none of it came true. We didn't end up flying everywhere on bat wings, after all. It echoes what I kept hearing all through my childhood: "By the year 2000, we'll. . . " (be able to levitate off the ground, eat all our food as pills, have a talking robot to clean the house, etc.)

Does anybody remember Y2K? Remember the panic and doomsday feeling everyone had, running around in tiny little circles waiting for the end of the world? Whole books were written about the mass rioting, famine, billions of refugees and general-all-around catastrophe that would happen when the date rolled over from all those 9s to all those 0s.

None of it happened.

My favorite moment in 2000, perhaps in my entire life, was when I looked in a remainder bin at Chapters and saw fourteen titles on the same subject: The Y2K Disaster, Millennial Catastrophe, Mankind's Final Hour, Goodbye to the Human Race, So Long It's Been Swell,  and blah blah blah, pure bullshit!

My point is. . . if I have one. . . humankind does tend to brace for the worst, and it usually doesn't happen. I'd like to apply this to Trump, but it's difficult. When the "worst" happens, it usually jumps out of nowhere. But there are times, my friends, there are times. There are times we have plenty of opportunity to prepare. 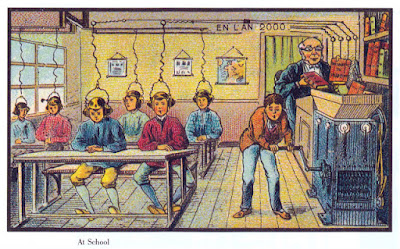 Now that I look at it more closely, the schoolroom scene is even more sinister. Textbooks are being fed into a giant machine with a crank, presumably ground up, then fed into the brains of the zombie-looking children. They look to be wearing headsets. Did they have headsets back then? If not, then this painting at least predicts something about the future (though they left out the iphones).

Or are the kids' brains actually producing those textbooks? This is getting too weird.

Posted by Margaret Gunning at 10:29 PM No comments:


Posted by Margaret Gunning at 9:53 PM No comments: