Fall of the house of Horse 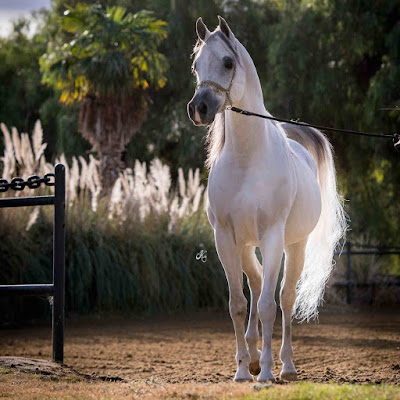 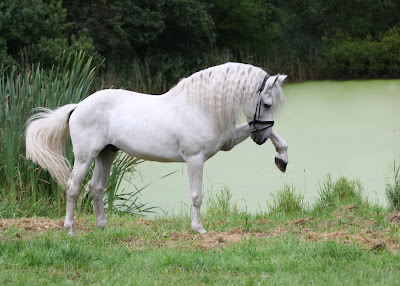 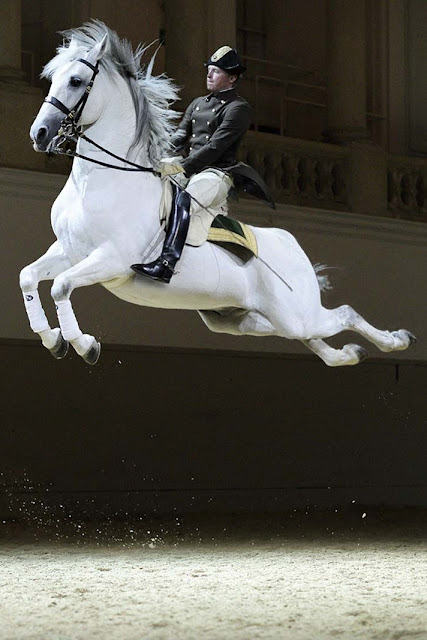 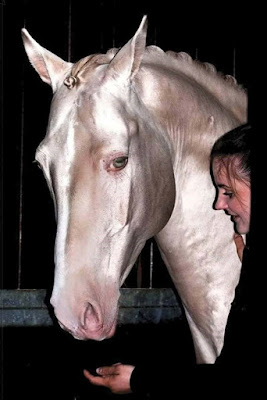 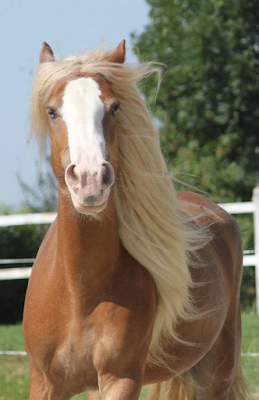 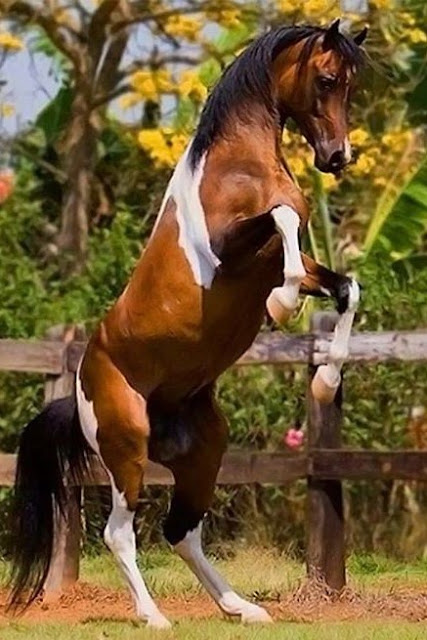 There's something just a little bit sad, and a little bit mad, about the way I collect horse pictures on the internet. 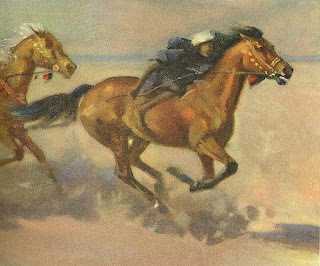 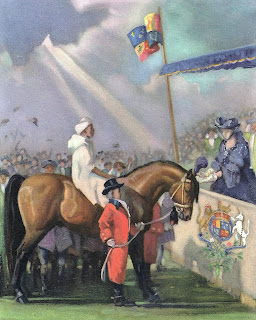 When I was a kid, I didn't have too many options. I had my horse books, such as King of the Wind (with Wesley Dennis' glorious illustrations of the sun-colored Godolphin Arabian) and the odd rerun of My Friend Flicka or Fury. For a short time I had a horse of my own - and I am sure I did not appreciate it at the time. These are among the sweetest memories I have, so it seems incredible to me that after a while, I lost interest. How stupid we are, or can be, in hindsight.

But I've also noticed some things about horses. 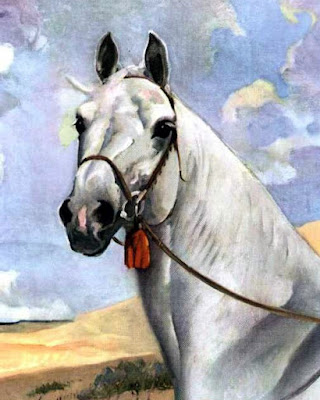 This 1960 painting of an Arabian horse by Wesley Dennis is the standard for the breed. . . or at least, it used to be. I pictured the "Arab" (as little girls called them, thinking of them as the epitome of horsedom) as having a fine, sculpted head sitting on a swanlike but muscular neck. Large dark eyes and flaring nostrils were traits of this ancient desert breed, as were small, pricked ears. 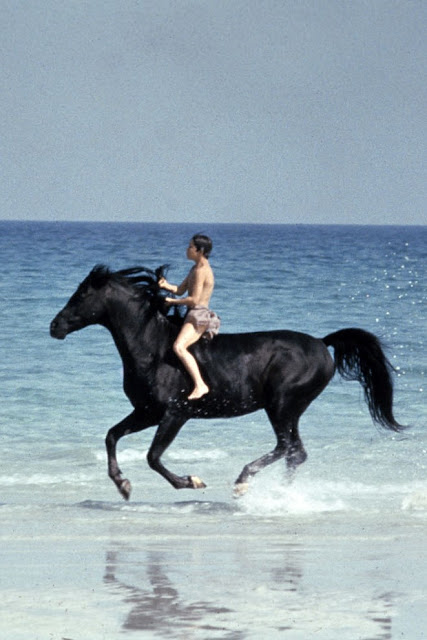 This horse (the cinematic knockout Cass Ole), shown in silhouette in The Black Stallion, reveals ideal Arabian conformation in every sense. Especially that beautifully symmetrical head with its elegant profile. Even as a horsy little girl, having read every horse book in existence, I knew there was a trait prized by Bedouin horsemen: it was called jibbah, and it referred to the slightly concave, tapering forehead and muzzle of the desert horse. SLIGHTLY, I said, as in the lovely Arabian mare above. 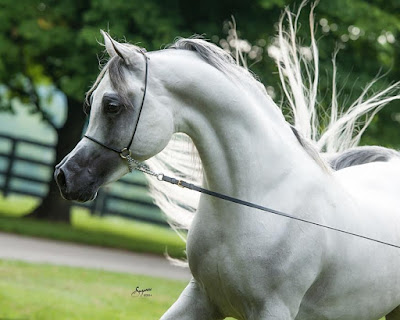 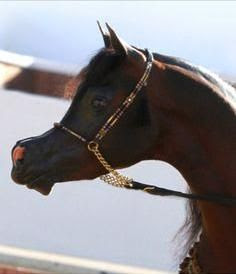 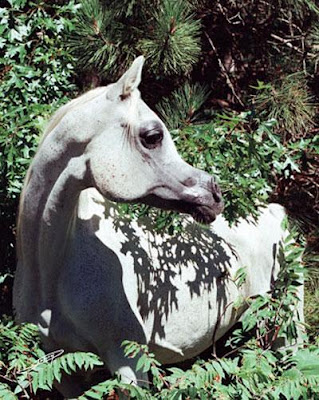 Somewhere along the line, in the past few decades, the standard of beauty and ideal conformation for the Arabian horse has gone to hell in a shit-basket.

The glorious and dignified desert steed has come to resemble something more like My Little Pony. 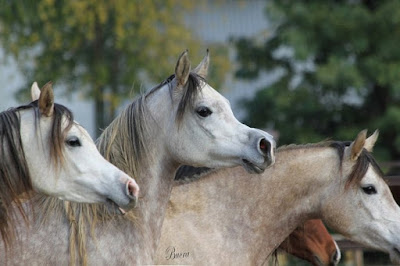 We now have a horse with a pig-snout: a muzzle that looks squeezed, with very large nostrils that have almost formed a mono-nostril (because there's simply no room for them at the end of that tiny nose), and black eyes that look something like an alien's. The show ring is behind a lot of this mutation/mutilation, with handlers applying eyeliner or even tattooing the horse's eyelids to give them that dark and sultry look.

But most of it is breeding. Bad breeding, to exaggerate traits that someone must have decided are quintessentially Arabian. The result is creatures which look disturbingly alike, like the Hapsburgs when their genetic house of cards finally collapsed. No one seems to see this ugliness any more, and horsy Facebook pages draw oooohs and ahhhhs in the comments section for the most horribly distorted photos of Arabians, their heads flung up unnaturally high and their eyes flashing because their handler just jerked the hell out of the lead.

That's not why I'm writing this.

I'm writing this because the other day I came across this photo: 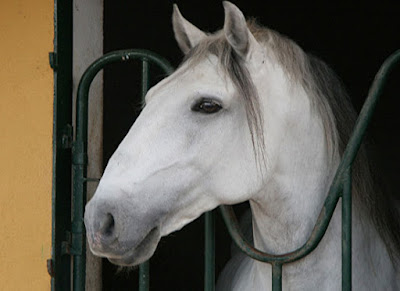 Hell-llo, I thought. In fact, I think I said it out loud.

It looked strange. It looked like the puzzle piece that might fit together with the grotesque Arabian "dished" face.

It wasn't just the exaggerated Roman nose, but the eyes, which had an exotic almond shape that gave the horse a "knowing" look. Unless we're talking about locating the feed bucket, most horses aren't particularly knowing.

It was eerie. What sort of horse was this?

It definitely wasn't a draft horse. It just didn't have the look of one. A Clydesdale or Percheron has the same sort of nose, but it belongs on a massive head and neck. This just looked strange.

When I looked it up, I was even more puzzled. 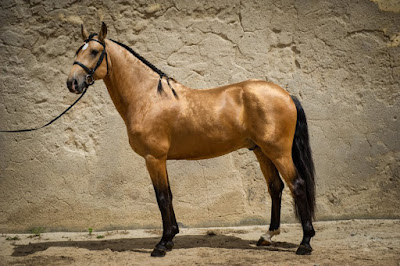 It's one of these.

An Andalusian  (and oh God, how I love that name! Say it again: Andalusian). It's a very ancient breed of Spanish horse, but a horse of a very different shape and size. You can instantly see that the neck is thicker, the body longer and more muscular than the Arabian's. The legs are more like a thoroughbred's. And the head is noble, with a curious convex curve that is the opposite of jibbah: what shall we call it - habbij? 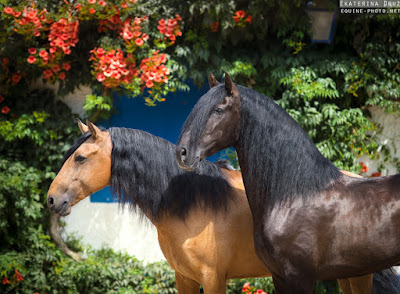 The Lusitano (another fall-over-backwards-gorgeous name) originated in Portugal, and a horse person would kill me for saying this, but they're pretty similar. So you have horses like this, magnificent steeds which resemble all those old paintings and sculptures of war horses. They're so different from Arabians - or even Morgans or Quarter horses or Saddlebreds or ANY of the breeds which originated from Arabian stock - that it's hard to know what to make of them. How did a saddle horse get a head like that? 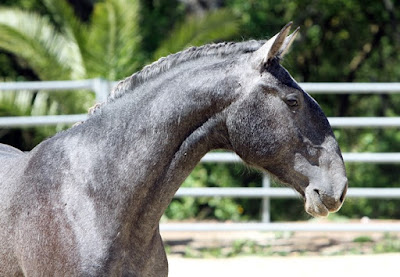 But here's where we start to get in trouble. Something about this horse's head isn't quite right. He looks inbred to me - though, of course, a lot of highly-bred horses are. It comes with the territory. But that convex head is as weird-looking as the Hapsburg lip. The eyes are almost squinty. Could it be that the breed's more distinctive traits are being deliberately exaggerated, for the sake of the show ring and the auction block? 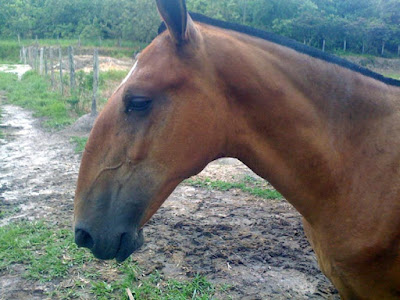 I hate to see it, because at their finest these are such beautiful horses. But this is not beautiful. This is deformity, not unlike the toy-like Arabians which have lost all their dignity through human manipulation.

No more horse lies! "From the horse's mouth" means telling the truth. And these poor creatures, through no fault of their own, are paying through the nose.

Blogger's afterthought. It's sad, some of the things you see. There are zillions of YouTube videos of horses, including Arabians bucking and prancing around. They are beautiful to watch. Here's a tiny clip:

The resemblance to Cass Ole is just astounding, even in the way he moves. It's just possible the two are related. But what dismayed me were the comments:

"That's not an Arabian."

"You trying pass this off as a Arab?"

"Look at the head, it's Quarter horse or a Morgan."

"Arab have deer head, not? This horse has no."

Yes. The "deer head" with the tiny squashed nose has now become the standard, so that a magnificent horse like this one is somehow "wrong".

My hope is that not all Arabians look like this. But the fact that ANY of them do dismays me, particularly since this sort of extreme breeding seems to be done to please the public.

I would be pleased by this. And thank you.

Posted by Margaret Gunning at 11:55 AM No comments:


Posted by Margaret Gunning at 11:31 AM No comments:

How to carry your cat in a car

How to carry your cat in a car

Posted by Margaret Gunning at 11:25 AM No comments: