I am not sure how I created this - I feel a bit like Dr. Frankenstein - but it's a "blank" doll, a form for any sort of character you want to make (in this case, a Scottish piper in full regalia). But here he is not in full anything, just a little mutant floating around, a thing with no face. 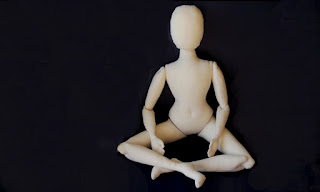 There is something about the flat, faceless disk that strikes terror in the human heart. Nowhere Doll. The unliving. Little girls have a tendency to rip off all their Barbies' clothes which end up in a grimy heap in the corner of the closet. Almost all Barbies end up naked, their hair filthy and snarled. Is this a kind of primitive reversion to the Ur-doll, the hank of hair and piece of bone that started it all?


Posted by Margaret Gunning at 10:46 AM No comments:

This guy's got rhythm, especially in that last image where he resembles nothing more than a boxer warming up before the big match.

Posted by Margaret Gunning at 10:44 AM No comments:

Dead monk in the middle of the road

This automaton of a friar can imitate a walking man thanks to a wind-up mechanism. The friar's eyes move from side to side, while one arm raises a rosary's cross for an automated kiss and the other arm strikes the chest in the "mea culpa" gesture from the Catholic Latin Mass. This friar was probably made in Spain or southern Germany and is about 450 years old. It has been in the museum's collections since the late 1970s. This video depicts the original figure. The clothing it wears are from the 1970s. The automaton and other mechanical figures, precursors to today's robots, are in the collections of the Division of Work and Industry, National Museum of American History. 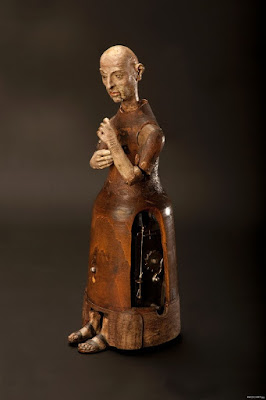 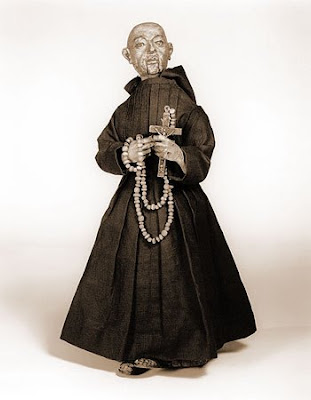 Hey, this might not mean much to YOU, but it's a real bonus to my week. It seems if you wait around long enough, that missing video will eventually show up on YouTube. In this case, it's been missing since about 1567. 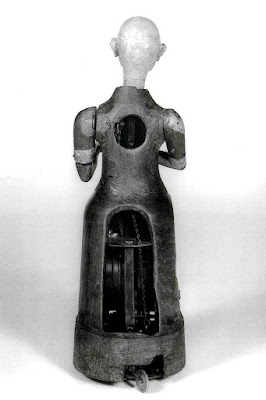 I've been fascinated with this guy (affectionately called Dead Monk, though I doubt if that was his real name - probably Saint Whatever) for years now, but couldn't find much about him. There are older, much more distorted and pixilated versions of this video, which I think plays along with the exhibit in the Smithsonian. I doubt if the old (old, OLD-old) man is still in operation - I think he spends most of his time in this glass case - but you never know. His 450-year-old joints may just be able to still perform. 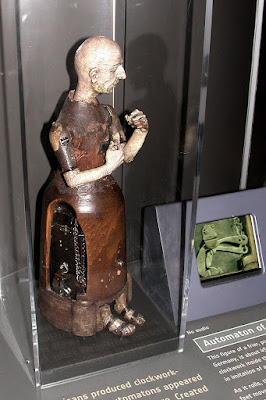 This boxing stance implies that he's been sparring with Sister Ignatius in his spare time, perhaps explaining how he has managed to stay fit for 4 1/2 centuries. If I ever got to see this marvel in person, I think I'd turn cartwheels of joy.

I've written about automata before - and a creepier mechanical genre you never saw, the unliving dolls of all time. Now that there are so many more decent videos around, it's probably time to look at them again.

And Dead Monk animations! Watch this space for more.

Posted by Margaret Gunning at 10:43 AM No comments: