Bentley sleeps with his eyes open

Posted by Margaret Gunning at 9:21 PM No comments:

I'm posting this without knowing anything about it! I haven't even SEEN it. But with a title like that. . .


Posted by Margaret Gunning at 11:16 AM No comments:

Back in the USSR


This is a longer version of something I found on Facebook. It had two-inch-high white captions which covered  1/3 of the screen and ruined it completely. This kind of caption is no doubt so huge that they will be easily visible on phones, though I do wonder about the power and majesty of a video that is one inch square.

This version is longer, which is good, but it has - well, it has Irish music with it, which is completely incongruous, but at least it's NICE music, and I don't see any jarring captions. 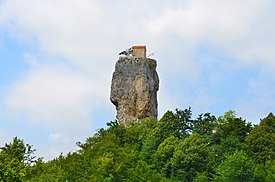 The Katskhi pillar (Georgian: კაცხის სვეტი, kac'xis svet'i) is a natural limestone monolith located at the village of Katskhi in western Georgian region of Imereti, near the town of Chiatura. It is approximately 40 metres (130 ft) high, and overlooks the small river valley of Katskhura, a right affluent of the Q'virila.

The rock, with visible church ruins on a top surface measuring c. 150 m2, has been venerated by locals as the Pillar of Life and a symbol of the True Cross, and has become surrounded by legends. It remained unclimbed by researchers and unsurveyed until 1944 and was more systematically studied from 1999 to 2009. These studies determined the ruins were of an early medieval hermitage dating from the 9th or 10th century. A Georgian inscription paleographically dated to the 13th century suggests that the hermitage was still extant at that time. Religious activity associated with the pillar was revived in the 1990s and the monastery building had been restored within the framework of a state-funded program by 2009. 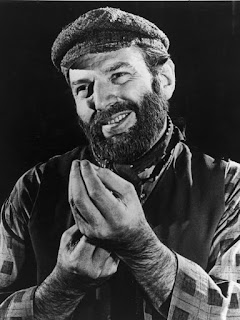 The Katskhi pillar complex currently consists of a church dedicated to Maximus the Confessor, a crypt (burial vault), three hermit cells, a wine cellar, and a curtain wall on the uneven top surface of the column. At the base of the pillar are the newly built church of Simeon Stylites and ruins of an old wall and belfry.

This is Katskhi Lite, of course, because who cares about the rest of it? Y'all can look it up, if you do, which is the (only?) nice thing about the internet. And as we all know, there's no more USSR, so Georgia is no longer part of it.

Versions of this clip (30 seconds or so) claim that a solitary monk lives on the top of this structure and only comes down twice a year, on a long ladder. This is total Facebook bullshit, though archeologists did find a way to get up there, likely by helicopter. But that doesn't sound as cool as the monk.

Maybe it's an Irish monk?

Flew in from Miami Beach BOAC
Didn't get to bed last night
On the way the paper bag was on my knee
Man, I had a dreadful flight
I'm back in the USSR
You don't know how lucky you are, boy
Back in the USSR, yeah

Oh, show me round your snow peaked
Mountain way down south
Take me to your daddy's farm
Let me hear your balalaikas ringing out
Come and keep your comrade warm
I'm back in the USSR
Hey, you don't know how lucky you are, boy
Back in the USSR
Oh, let me tell you honey

Posted by Margaret Gunning at 11:13 AM No comments: