The first time a blackbird flew down to eat out of my hand at Burnaby Lake, my hair stood on end (figuratively speaking). From the time I was a little girl, I longed to have a bird light on my hand, and  I even used to stalk them, wondering why they always flew away.  A mean neighbor kid said I could catch a bird if I put salt on its tail, and I literally went tromping around with a salt shaker in my hand for the longest time. I also took home baby birds I found on the ground, which I now realize was a mistake: in many cases the parent birds are still feeding them. I've seen nearly-full-grown crows screaming after their parents, still wanting a handout. The birds I took home nearly always died, or were so close to being adults that they just flew away on their own.

I lost my beloved Paco a couple of years ago, and it still hurts. How it hurts. The bond between bird and human isn't understood unless you have it. Most people say it's "only a bird". Now that we know more about the intelligence of ravens and crows, attitudes are changing. Paco was a sweetheart, a violet-blue lovebird who at only a few weeks old was highly sociable and smart. Then, only a few weeks in, I found her dead in her cage.

Losing Paco led indirectly to gaining Bentley, but our attachment to Bentley was amplified, I am sure, by the loss of Paco. Bentley, too, came from a difficult background. No one quite knows the extent of the trauma, but I am sure he would have died had someone not rescued him in time. Covered with dog bites and nearly emaciated, he was found wandering around Surrey, the toughest neighborhood in the lower mainland. He had no tattoo, no chip, nothing to identify him, but he clearly wasn't feral. Once he recovered he turned out to be a wonderful pet. His loyalty and protectiveness towards us is a palpable thing. He is simply dear.

But these, my wild birds, I still have. It was a delight when the first bird of spring descended. Over the winter we kept hearing the delightful ker-squeege of their song high in the bushes, but no birds ever came down. The ones I saw up there looked immature. Even now they are still a little shy of full adulthood, their feathers a bit mottled with juvenile camouflage. The big, lusty males of last summer must be off nesting somewhere.

These are a comfort to me, because to be honest, I have lost so much over the past several years that I can't begin to count the blows. I am sort of afraid of totting it all up. Some of it was stuff or people I had to walk away from, because it or they had become suffocating. Some was simply taken from me. Life is about loss, no matter what our shallow, striving, materialistic culture might think (if you can attribute thinking to it at all).

You don't try to get it back, and there are no compensations. Not really. You just keep going, and going, into the unknown.

Posted by Margaret Gunning at 11:11 AM No comments:

I get obsessed with certain things, and it's wrong of people to say being "obsessed" is an unhappy thing. My obsessions make me happy as shit. But they do get tiresome. I got looking at those magazine pictures of desserts, you know, the really gross or extreme. flourescent-looking/baroque ones from the 1950s. The Betty Crocker stuff. And at once, I began to make a collection. I can put this on my blog! I told myself. But it began to seem too, too much like something I had done before. So I began to combine obsessions: my bizarre attempts to animate, and my usual ho-hum slide-showy-giffy stuff. I could regulate the speed, of course, and repeat and alternate frames any way I wanted to. Really, that was about the extent of it, and the result is enough to give you a migraine.

There was one I left out. I had already made the gif, and damn if I was going to go back and do it all over again, since I'd already chucked the first three or four attempts (as usual). But the one I left out. . . it was magnificent. It was just the epitome of everything tacky, tasteless, overelaborate and basically unappetizing about these things. 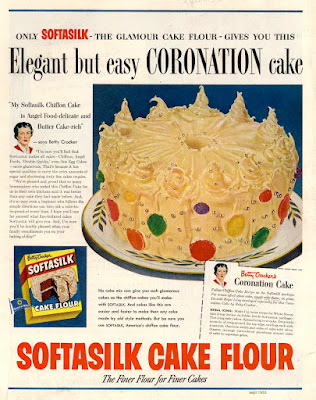 This thing looks Satanic, a hell of yellow goo, the dark sinkhole in the middle a prison you will never escape from.  It is stuck all over with gumdrops that look like pustules, and those little silver balls we used to put on Christmas cookies, the ones that had real silver in them. Every once in a while you'd be chewing, and there would be this crunch, and a taste of metal. Maybe a broken tooth. And the Softasilk Cake Flour, I'd never heard of that before.

I don't know if Coronation Cake had anything to do with the coronation of Queen Elizabeth II some time in the early '50s (and NO, I don't remember it!). Some time in my rifling around to find good photos for this project, I found an actual picture of one of these cakes that someone had made. It got deleted along with a lot of godawful other stuff. My recycle bin doesn't even work any more. It keeps shutting down. It hates what I am feeding it.

But I dredged it back up with my indispensible Tin Eye feature, which can find nearly anything: 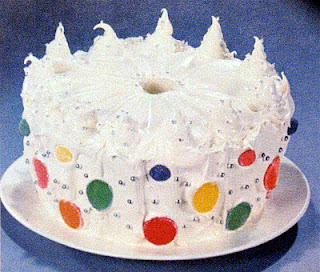 So somebody must have actually made this cake. There are whole web sites, blogs and YouTube channels devoted to testing out those awful-looking post-war recipes. This one looks like some bizarre hat, or a merry-go-round without the horses (more likely, an ugly-go-round). But I have to hand it to Tammy Tingles (the only name I could find for this creation). With that hole in the middle, it must be angel food, and I do not know how an angel food cake could support all those devil-horns of frosting and inedible-looking gumdrops without collapsing.

The original is far uglier and more menacing, reminding me of nothing more than one of those creepy abandoned carnival rides that should have been junked a century ago. I had to do something with it! I had thought of making the cake jump around, or the gumdrops fall off it or something. Then I had this demonic idea, but it didn't work. It ended up like this:

Originally I had Betty Crocker morphing into some sort of figure from The Exorcist, and at one point she had a mouth like The Joker from Batman. Then I thought, to hell with it, it's lame. Just having her pop up like this took a lot of work. I think I'm getting better at actually having my figures move, however. They don't just jerk to and fro. Varying the speed is key. No matter how much I work on this it doesn't quite satisfy me, so at this point I will say to hell with Betty and her Satanic cake.