Posted by Margaret Gunning at 10:43 PM No comments:

Cat in a hat


Posted by Margaret Gunning at 10:41 PM No comments:

Email ThisBlogThis!Share to TwitterShare to FacebookShare to Pinterest
Labels: cat in a hat

I roo the day 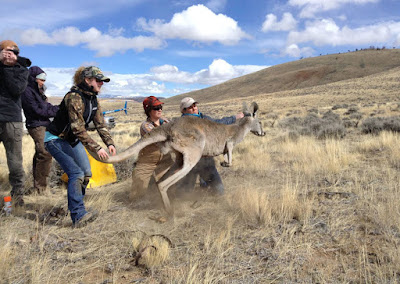 
(Dubois, Wyo) – The Wyoming Wild Game Department (WWGD) partnering with the Wyoming Migration Initiative (WMI) have released the first of 5 planned batches of 90 Antilopine Kangaroos into the Wyoming outdoors.

Dubbed “Project Sage Hopper” by the WWGD team responsible for evaluating the viability of Wyoming’s habitat for Australian marsupials, it has been in the planning stages for 3 years. The goal is two-fold: Create new and interesting wildlife viewing opportunities for tourists, and in several years, potentially provide additional hunting opportunities.

I didn't think kangaroos could stand the Winter. I don't think it snows in Oz.

Huh... That sounds like my private program of releasing Australian funnel-web spiders, cause *** you. Me and my spider minions will rule the earth.

It snows in OZ, they have mountains, and Tasmania can get cold (was actually in a snow storm there) 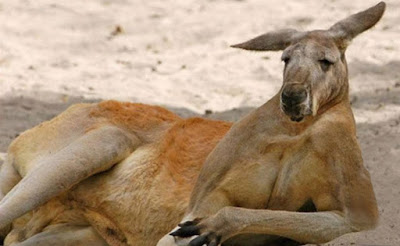 Yeah, so tourists can watch free Thai boxing in the wild.

I used to live in WY. Their Fish & Game folks have NO sense of humor about imported species.

(Besides, common sense sez it gets WAY too cold there for kangaroos.)

Let them breed a ton as I hear they taste delicious.
You hear from whom? According to my Aussie sources, there's a reason basically nobody actually eats them, and it's not just because they can kick your nuts up and out through your nose faster than you can say "I'd like mine medium-rare, please..."

Let them breed a ton as I hear they taste delicious. 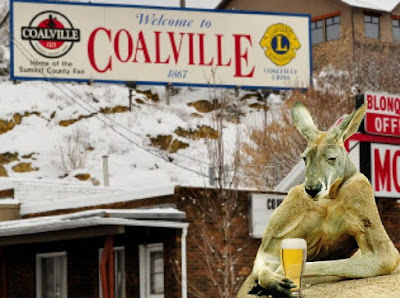 It's not bad. Chewy. High-protein. I've only had it once & it wasn't a very big cut. Bison burgers

My neighbour's kid said there was a peacock running around in their backyard. I thought she was confused (by a pheasant), or was just pulling my leg. It turns out she was neither. It really was running around there. By the time I got there it was gone, but I checked out the ravine behind our houses, and actually spotted it. Well, it was not a peacock, but a peahen, which is the female version.
Apparently, occasionally they escape from farms and zoos and then just take up residence in the local ravines and forests. And they survive our Canadian winters just fine.

They're very popular for pet food. 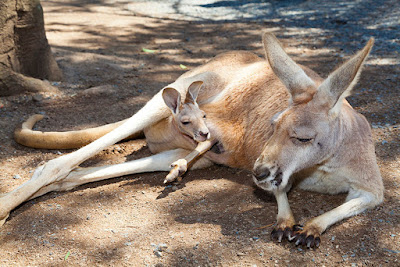 Great, more immigrants.  Least they have a place to carry their papers.

I live in Australia. All the kangaroo meat is shot from the wild because they're everywhere. The meat is red, has no fat or marbling, and tastes light and sweet. You have to have them rare or medium rare or else they're too tough. Ground kangaroo and kangaroo sausages (kanga-bangas) are also widely available.

Wallaby is every sweeter than kangaroo and is available only in Tasmania AFAIK.

Let them breed a ton as I hear they taste delicious.

Maybe to the dingoes. Otherwise, no, not at all, whoever told you that is dead wrong. Kangaroo is delicious the same way durian is sweet and refreshing. Sure there's plenty of them bouncing around, but with all that beef and lamb there too...

Posted by Margaret Gunning at 11:29 AM No comments: