Tesla's folly: or, the day the ship disappeared 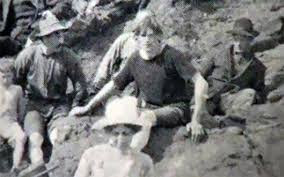 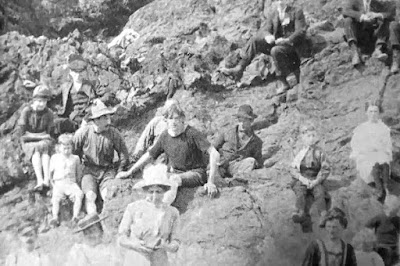 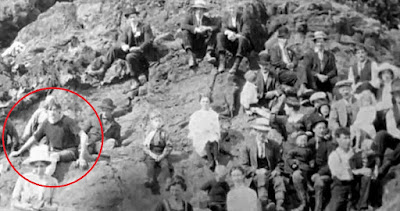 These photos (or this photo - the top one is a blowup of the circled figure in the bottom one) go around and around on the internet, and keep appearing on those Top-Ten-Incredible-Time-Travel-Photos-That-Will-Absolutely-Blow-Your-Mind type of things. They pop up on Facebook all the time, and even on YouTube, where Top Ten lists have taken over and spread like a cancer. 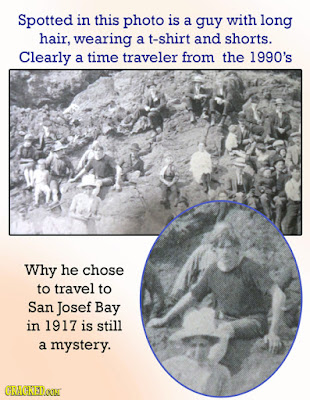 This one has been around for a while. It certainly does look odd. This is a group of people - spectators, it looks like, but of what I don't know. Something that's about to happen. They're all sitting on the side of a mountain, and way off to the side is this guy. He really doesn't look like the rest of them, with his board shorts, sloppy tshirt and shaggy hair. In fact, he has been nicknamed Surfer Dude. Historians place this photo around 1917, fully a hundred years ago.

Could be photoshopping, in which case it's awfully well done. But consider this:

This guy has been called Hipster Dude, and like Surfer Dude he sure does seem out of place. The photo is from the 1940s, and everybody has hats on. But this guy has shades, longer hair than anyone else, a tshirt with some sort of logo on it, and what might even be a hoodie. The camera in his hands doesn't look like the hulking things everyone else is carrying. Somebody claims that this is another view of the guy's head, but who's to say? I can't tell from here.

And here's a gif I made from some Edwardian-era film footage. Just keep your eye on the guy in the long dark coat, sauntering along beside the wagon, bareheaded, pulling his left hand out of his pocket.  Look at the people who are walking behind him (the stiff woman all in black, the stiff couple behind her), the way they're dressed, and compare it to him. The Sauntering Dude (for that's what I call him) might be someone you'd see walking down the street today, whereas those others belong in a museum. Hatted, corsetted, and all the things you had to be back then. Sauntering Dude might even have his coat slung over his right shoulder, which would be almost unthinkably casual back then. Just going bareheaded was mighty strange. I wish I knew more about this guy, because he truly does not seem to be in the right time or place.

I have to admit that some of these things "proving" time travel don't hold up very well. This guy looks like Nic Cage, but when you think about it, probably a lot of people do. There are those who make a living as lookalikes. That Obama guy - who must be out of work by now - looked more like Obama than Obama. Doppelgangers aren't really such a rare thing. 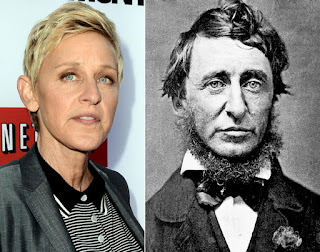 And here we have Ellen DeGeneres and Henry David Thoreau. 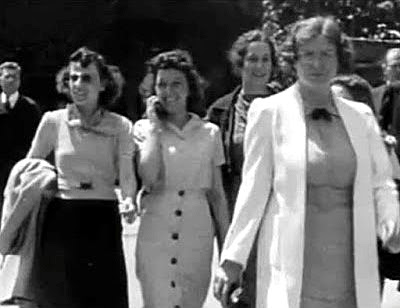 I've seen a number of these things where someone is holding a "cell phone" back in 1939 or something - and it's true, there is something odd going on, but since when were there cell phone towers then? So even if the person DID have a cell. . . or did their phone somehow mysteriously receive signals from the future? This is just getting too mixed up, somehow. 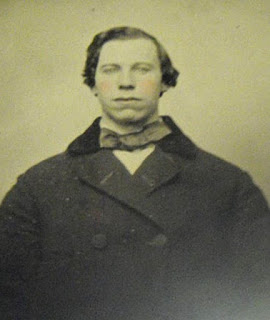 Yes, I guess this DOES look sort of like John Travolta, but so what? 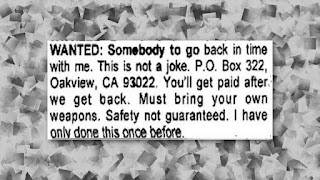 I like this ad, don't know when or where it was placed, and most of all I wonder who answered it, and what happened. The "after we get back" is optimistic, I think. I always thought that about moon landings, too. It is nothing short of a miracle that the astronauts never got stranded up there. (Bill tells me they were all given a cyanide capsule "in case"). 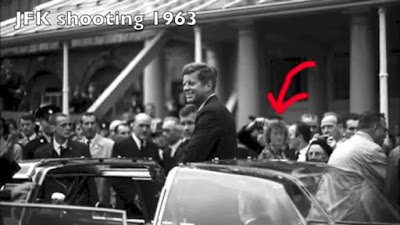 This doesn't prove anything. About anything.  I don't know if this is from the Zapruder film or what, but there's a big red arrow pointing to "someone". Maybe, like Woody Allen's Zelig, it's somebody who just keeps a-poppin' up everywhere. 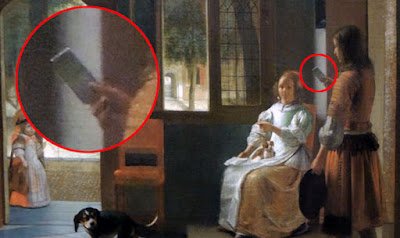 This sort of thing is just silly. Rembrandt was into iphones? I think the internet is reaching here.

What really got me going on this subject was a little story that made my stomach drop, for some reason. During World War II, the U. S. Navy was experimenting with cloaking ships so that they would not appear on enemy radar - rendering them, in a sense, invisible. The Philadelphia Experiment has been much written-about and generally discredited as a hoax or science fiction, but. . . but. It's a story that will never quite go away. 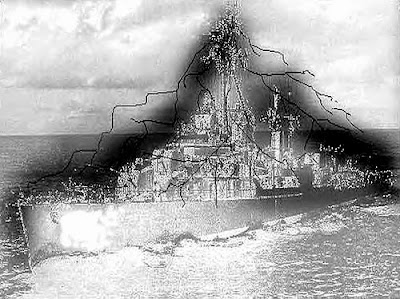 This story claims the experiment was successful and that the ship became invisible, then - bizarrely - showed up in a location hundreds of miles away before disappearing again and reappearing. During this ghost-ship phase, the vessel had a sort of form, but not a solid one, and the men were terrified to find they could walk through walls. When the ship re-materialized in its original location, all the men had gone completely mad. Some of them were literally fused together with the walls they were walking through. Is my hair standing on end yet? 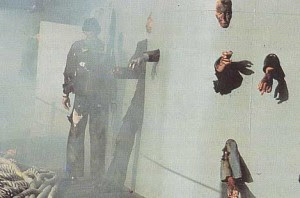 So what did they do to cause all this havoc? They wrapped the ship in enormous Tesla coils that generated so much concentrated electricity that it literally blew the vessel into another dimension. But that's not the kicker. The ship actually went back in time for a while - some say ten minutes, some say ten seconds. It's as if all this Tesla demonic magic fucked around with the space-time continuum, and the thing is, yes, it IS possible: time doesn't just flow in one direction, and space and time are the same thing anyway. Go ask Einstein.

So you have this ghostly freighter, like something out of Kurt Weill's Pirate Jenny, and men getting fused with steel and concrete and going mad and being put in institutions, and ships disappearing and reappearing in a too-successful attempt at a cloaking device, a la Star Trek.

There's more to the icky, squicky feeling I get when I enter this arcane subject. Back when I was researching Harold Lloyd, about a million years ago, I found a very odd web site called Psychic Bridging. It had a lot of weird stuff in it, including a claim that disembodied spirits can get trapped in cell phones and other electronic devices (first I'd heard of that, though I do wonder why no one has thought of it before). But then it mentioned - Harold Lloyd. What I was able to piece together was that he was doing some sort of experimental work for the government during the 1940s, and it was all about time travel, something he (with his endless boyish curiosity) would probably be fascinated with. It was a kind of remote viewing thing called psychic bridging, in which you're the ultimate armchair adventurer, sitting in the present day viewing actual events from the past. But something went terribly wrong. In the words of the blogger, a man named Paul Simon, "Harold Lloyd was hospitalized after becoming self-detached during filming in 1943."

Self-detached. Is that kind of like Peter Pan losing his shadow and having it sewn back on again? Harold Lloyd DID make a movie in the early '40s, his last, and it wasn't very successful. But did he blow his mental circuits doing secret government work, or what? I don't know why it is, but I would not be the least bit surprised.

But the really weird thing is - though I did find one YouTube video made by this Paul Simon, at a certain point the whole thing disappeared. The web site was gone, along with the video. Nobody seems to know what psychic bridging is, or if it even exists. Another disappearing act? 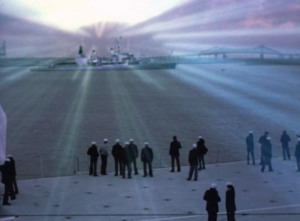 I don't want to think about time travel too much because, though I know it is theoretically possible, it's too full of paradoxes for me to wrap my brain around. What if I went back in time, met my younger self, and killed her? Or - even - killed my parents. See, I don't know how that would work. I would hate to meet any version of myself from the past, and I don't know how that would go anyway - would I just suddenly appear in the living room, or would I be disembodied, just sort of floating around (speaking of invisible) taking notes? Would I recognize my older self and start screaming? For I think it would be infinitely more freaky for your young self to suddenly encounter your old self.

If I took my phone with me, could I take video? Or not? Could I bring it back, or would it disappear? Would I disappear?

I think there are bubbles in time, distortions, maybe even ripples, places where it overlaps, and things that happen over and over again, because it's a mystery. Every once in a while something absolutely freakish comes about, and we run from it, so far and so fast that it's quickly debunked and denied as just too terrifying to be true. 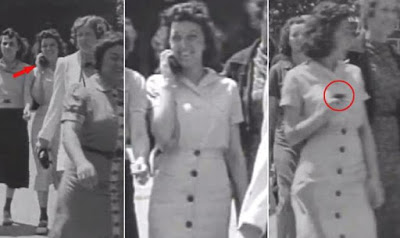 I think about the afterlife sometimes, if there is one, and I hope there isn't because if there is the kind of conventional heaven and hell I grew up with, then I will surely go to hell for all eternity. I know it sounds stupid, but I really do fear it now as I get closer to my own end. There are lots of things I am MORE afraid of, escalating Trumpism, nuclear war, climate change (but don't get me started on THAT or I will lose the few loyal followers I have). Finally, on the subject of time travel I remain open, but not entirely. I like skepticism and think it's healthy, but at the same time, a mind is a terrible thing to close. 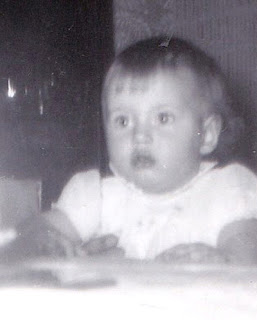 My completely rational scientist husband once told me that time travel is theoretically possible, and he said it in a casual oh, yeah way that kind of shook me up. He does not even see it as an odd idea, or beyond the realm of possibility. But I think it can mess you up big-time. The guys on that ship, you know, and Harold Lloyd. . .

This is usually about where I get off.

Posted by Margaret Gunning at 12:42 PM No comments:


Posted by Margaret Gunning at 1:05 AM No comments: