One of the weirdest things I've ever seen

An ice shove, ice surge, ice heave, ivu, or shoreline ice pileup is a surge of ice from an ocean or large lake onto the shore. Ice shoves are caused by ocean currents, strong winds, or temperature differences pushing ice onto the shore, creating piles up to 12 metres (40 feet) high.

Anyway, I've never seen anything quite like this. It was reassuring - somewhat - that this is actually a "thing" and not some freakish nightmare driven by climate change. As per usual, this video (a couple of years old now) was passed around without any explanation. The tinkling crystal-chandelier sound has an undertone of relentless chugging, like an awful ice train. That part of it I don't understand, at all. It still looks like some supernatural event to me, like a glacier somehow sped up about a million times.

Blogger's annoyed post-script. I can't find a thing on "ivu" except in that Wikipedia piece. Wikipedia defines it very strangely:

Ivu or IVU may refer to:

Ice shove (Inupiat terminology is Ivu), a surge of ice from large bodies of water onto the shore
Impuesto sobre Ventas y Uso, the Puerto Rican sales and use tax
International Vegetarian Union, a non-profit organisation promoting vegetarianism
Intravenous urogram, a procedure to examine the urinary system
Ivu or Eve, a character from the manga Black Cat

It isn't even a REAL black cat, but a person, and nowhere is she called Ivu. I give up.

Posted by Margaret Gunning at 12:24 PM No comments:

You ARE in the chair.


Posted by Margaret Gunning at 11:59 AM No comments:

Email ThisBlogThis!Share to TwitterShare to FacebookShare to Pinterest
Labels: Bette Davis, Joan Crawford, What Ever Happened to Baby Jane?, you ARE in the chair

Growing up, I had a constant sense of doom. Maybe it was from being a Cold War kid and having nothing explained to me. In this doomy era of Trump, many of those feelings are back.

I swear to God, it must have been 20 years ago, I was sitting at home minding my own business when I heard the end-of-the-world sound of an air-raid siren. I couldn't even take it in. Nobody could explain it to me - in fact, nobody else had even heard it. It was the story of my life.

Later I asked a friend about it, and he said, "Maybe they were just testing it out."

For what? I never found out.

Posted by Margaret Gunning at 11:57 AM No comments:

Chew your little troubles away 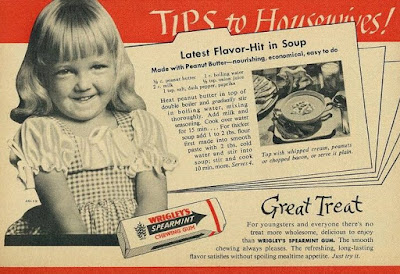 Made with Peanut Butter - nourishing, economical, easy to do

Heat peanut butter in top of double boiler and gradually stir in boiling water, mixing thoroughly. Add milk and seasoning. Cook over water for 15 min. . . . For thicker soup add 1 to 2 tbs. flour first made into smooth paste with 2 tbs. cold water and stir into soup; stir and cook 10 min. more. Serves 4. Top with whipped cream, peanuts or chopped bacon, or serve it plain.

Blogger's note. At first I had the horrible thought that this peanut butter soup had Wrigley's Spearmint Gum in it. It's bad enough as it is. Peanut butter IS sometimes used as an ingredient in cooking, but here it's just - wrong. I mean, two cups of milk and one cup of boiling water? That's THREE cups of liquid added to a mere half-cup of peanut butter. It's just not going to work. Fifteen minutes of cooking isn't going to make this into soup, and even adding flour paste (the kind we used to stick paper together) won't make it thick enough to resemble soup. The whipped cream garnish strikes me as pretty bizarre, and the bacon - it's just a waste of bacon.


Is this a wartime/rationing recipe, do you think? There used to be a kind of "soup" in England during the war called Brown Windsor, made of gravy powder and water. Let us give thanks that, at least in this small details, things have gotten better.

Another Blogger's Note. I did find a number of recipes using peanut butter. I won't give the full recipe for this one (African Peanut Chicken Stew) because the page has asked me not to, but I could certainly go for it: 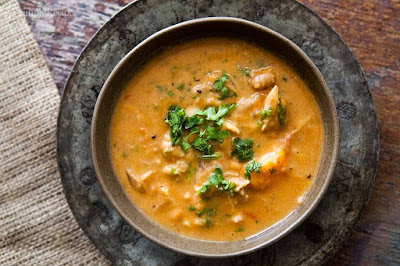 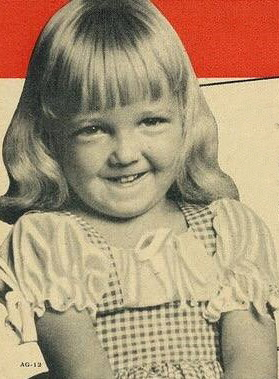 Posted by Margaret Gunning at 11:54 AM No comments: