Blow me down (please)! 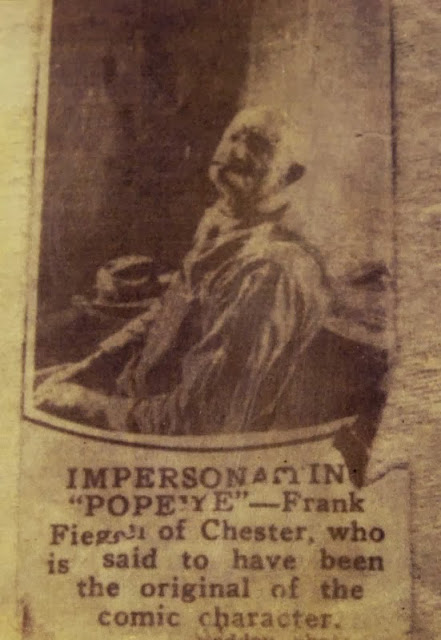 Old, brown, crumbling things always interest me. (Don't take that too literally.) I am a great Popeye fan, I mean the original grotty old Max Fleischer cartoons of the 1930s. By wartime, it had all started to fall apart as Popeye (along with Donald Duck and most other well-known animated characters) began to spew propaganda for Our Side. But I had always had some dim awareness that he was based on a real person. 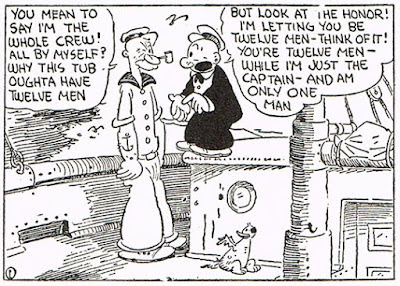 THIS Popeye does resemble that fellow, Frank Fiegel of Chester, though I haven't been able to find out much about him. (Stay tuned.)

Meantime, here are two early Popeye moments that stick in my head:

From that ultimate authority on everything, Wikipedia:

"Local folklore in Chester, Illinois, Segar's hometown, claims that Popeye is based on Frank "Rocky" Fiegel, a man who was handy with his fists. Fiegel was born on January 27, 1868. He lived as a bachelor his entire life. According to local Popeye historian Michael Brooks, Segar regularly sent money to Fiegel." 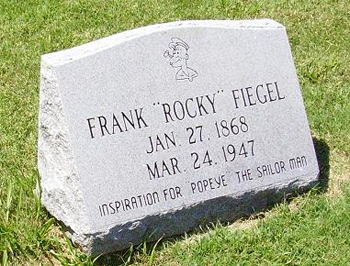 From that other site bearing Ultimate Knowledge, Cracked:

Find-a-Grave "A stone for me bones, heh-heh, a post for me ghost."

Fiegel was something of a local legend in Chester while Segar was growing up: He was known for always being prepared to dish out an ass whooping and taking on several opponents at the same time. He even acted exactly like Popeye -- locals claim that children would startle him while he napped and he would "jump out of his chair, arms flailing, ready for a fight." His official cause of death was "warships grew out of his biceps."

POST-POP. I just had one of those wretched experiences where most of my post just disappeared. I clicked on Revert to Draft and everything. But it's gone now, a few hundred words at least, and photographs and gifs.

Not sure whether it's worth trying to piece it back together, but I'd rather not lose a couple of hours like that. But do I want to lose ANOTHER couple of hours doing a salvage job?

But I must carry on.

As a kid, I particularly loved this Paramount logo at the end. It only appeared in the first half-dozen or so Popeyes, so it was something of a collector's item. (That desk calendar in the background - I still use those, though it is getting harder and harder to find refills. At Staples, they looked at me like I was crazy. I finally had to break down and order one online from Acco, and it still isn't here. Canada Post is extremely slow.)

When my own kids were pre-teens, they loved the old Popeyes (for some reason). They came on every day at 5:30 a.m., and I taped them. I even edited them so there were no repeats. The game we played was this: to try to freeze the tape on the inkwell, but I don't know if any of us did it. Or maybe once.

Those were rare times, maybe the best times of my life, though of course I didn't realize it until much later. Until, maybe, now. We were all so crazy about Popeye that we once acted out all the parts in Beware of Barnacle Bill. I had transcribed the entire libretto from the cartoon and made it into a script.

Is this dull? Sorry. It's dull for me, too. Have you ever had to piece together a whole post that disappeared? I'm so angry my hands are shaking, and at the same time I am extremely bored.

Anyway, what's next in this now-pretty-dull story? At this point I had six hours of Popeye on a single videotape. But DVDs were just coming in, and I so wanted my precious cartoons in a more convenient format. So I mailed the tape off to one of those places that claimed to transcribe VHS to DVD for a very modest price.

I never saw the tape again. I felt bad about this for years.

Fast-forward, or maybe slow-forward, to 2007, when I was meandering around the Zellers store. The late, lost, lamented Zellers. And I saw something I could hardly believe: 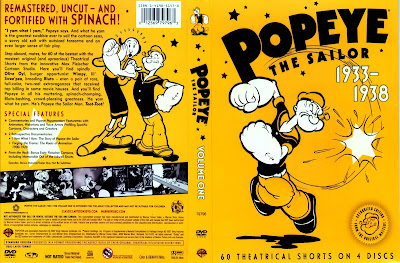 YES! It was a DVD boxed set of SIXTY Popeye cartoons, in chronological order from the first one in 1933. They were in amazing condition, remastered and all that stuff, but not mucked-with. Much of it, particularly the beautifully-drawn silver-grey backgrounds, I was seeing for the first time. Then there was the amazing Fleischer technique of using a miniature set on a turntable to create a 3D effect. I've had this explained to me several times, but I still don't get it techically. To my understanding, the moving animation cels were filmed superimposed over the live-action background set, which was turning. Beats me how they did it.

I soon got my hands on the next two collections, but I noticed all the cartoons were in black and white. I was sure the ones I'd watched with my kids had been in colour. (The childhood ones, who knew - everything was in black and white back then.) 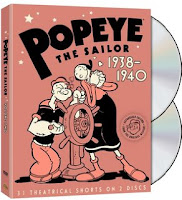 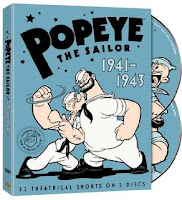 It took me a while to untwist this story. It turns out Ted Turner did it. He ruined these things, or almost did, by changing them into sickly pastel colours, pink and yellow and minty-green. I wonder whatever happened to the "colorization" movement, and why Ted Turner now heads up that so-called bunch of film purists, Turner Classic Movies. Why was he forgiven? Money talks, I guess. What a thug the man is. Anyway, this mistake was undone at some point.

Probably lots of intrigue here, but I don't care about it because I have somehow managed to retrieve MOST of my lost post, if in flat, dull form. I hate blogging sometimes, but I hate losing posts even more.

Posted by Margaret Gunning at 1:39 PM No comments: 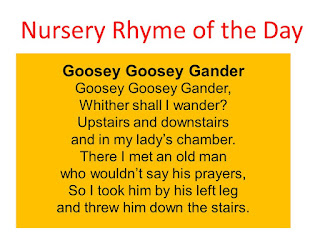 I don't know why I've had this rather inane nursery rhyme repeating in my head lately. I don't know how it got started. I'm aware that most of these childish things have dark or even sinister origins, buried in antiquity somewhere.

I wondered if this one wasn't just a piece of nonsense, incongruous, like the wacky poems of Edward Lear or even Lewis Carroll. But no. The merest probing into Wikipedia brought up this:

Most historians believe that this rhyme refers to priest holes—hiding places for itinerant Catholic priests during the persecutions under King Henry VIII and later under Oliver Cromwell. Once discovered the priest would be forcibly taken from the house ('thrown down the stairs') and treated badly. Amateur historian Chris Roberts suggests further that the rhyme is linked to the propaganda campaign against the Catholic Church during the reign of Henry VIII.

Other interpretations exist. Mark Cocker and Richard Mabey note in Birds Britannica that the greylag goose has for millennia been associated with fertility, that "goose" still has a sexual meaning in British culture, and that the nursery rhyme preserves these sexual overtones ("In my lady's chamber").

Priest holes! Sexual connotations! It doesn't quite hang together for me, but these things can evolve over time, or exist in layers. The original version didn't even have the throwing-down-the-stairs bit:

Goose-a goose-a gander,
Where shall I wander?
Up stairs and down stairs,
In my lady's chamber;
There you'll find a cup of sack
And a race of ginger. 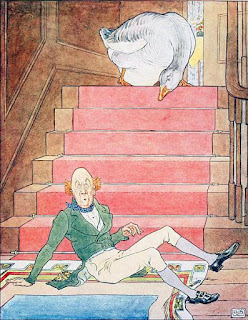 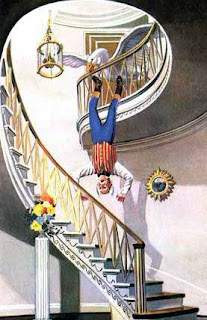 We won't even ask what a "race of ginger" is. It's just one of these obscure things. Some older versions include these even-sillier lines:

The stairs went crack,
He nearly broke his back.
And all the little ducks went,
'Quack, quack, quack'.

All that strange left-leg stuff ("so I took him by his left leg and threw him down the stairs") didn't seem to add up for me, until I suddenly remembered hearing the expression, "He kicks with his left foot." Just recalling that phrase jarred awake a synapse that hadn't fired since I was six and listening to my Grandmother quietly, politely eviscerate every Catholic in the neighborhood. The left foot is like the left leg or the left hand - sinister, half a bubble off plumb, "not the thing". In other words, to an observant Protestant - Catholic.

You have to ask yourself, however, why anyone would invent a children's rhyme about priest holes and the persecution of Catholics, those nasty old left-foot-kickers. Why would anyone throw in references to geese (ladies of the night) and ladies' chambers (implying high-status quarters not normally open to the goose trade)? There is Mother Goose, of course, just to complicate things. But if you really look at the structure of the rhyme, which absolutely no one does, you see that it can be interpreted entirely another way.

The narrator, the "I" who is reciting the rhyme, is actually addressing it to the goose character - asking it, in essence, "where should I go? It's kind of like "hey, you over there - yes, I mean YOU, Goosey Goosey Gander - what's a-happenin'?" But it's definitely not "Here I am, Goosey Goosey Gander, Esquire, and let me tell you all about my lady's chamber." This is in spite of the fact that every illustration I've ever seen for this thing includes a big, nasty goose, usually throwing a man down the stairs.

In fact, "Goosey Goosey Gander" might just be a collection of nonsense syllables, a blithery-blathery-tra-la-lee sort of thing.

If you take the goose right out of the equation (and that's no fun, because I love these depictions of savage geese throwing terrified men down the stairs), then you have something like this:

Dinder, dander, donder
Whither shall I wander?
Upstairs, downstairs,
In my lady's chamber.

The old man who wouldn't say his prayers kind of reminds me of the old rhyme about "I met a man who wasn't there". In any case, is it really the goose who does the "throwing down the stairs" bit? Of course not; it's the narrator of the poem. So maybe it's really by that notorious old Catholic-hater, Henry VIII. Who knows, he wrote a lot of songs, such as Greensleeves. Or maybe Anne Boleyn wrote it for something to do in the Tower before she got chopped.

Posted by Margaret Gunning at 12:24 PM No comments: