Breathtaking: fireworks over the Eiffel Tower


Posted by Margaret Gunning at 11:20 PM No comments:

The best cat, I mean, the BEST 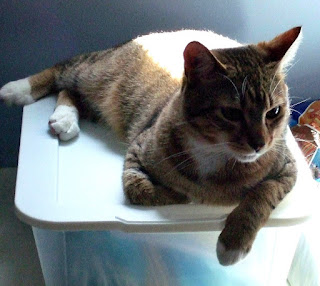 I’m gonna ask my mama
if she’ll let me take him home
Where I can hold him close to me
so he won’t have to roam
He oughta have a lot of milk,
and lots of fish and meat
Instead of finding what he can
in the alley and the street 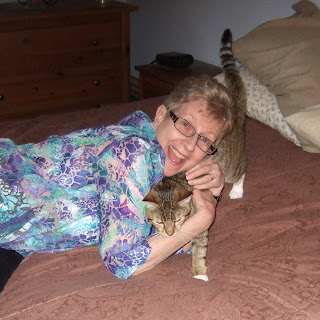 
as happy as can be

Cat lover's note. This song, beloved in my childhood, is somewhat biographical. Bentley came to us from the SPCA, designated as a "stray". These were once called "alley cats", though the term "stray" was floating around to describe missing dogs. I knew very little about Bentley's history. Nobody did. He was about a year old, brought in by someone who found him badly injured, likely mauled by a dog or coyote. We had to piece together his story after the fact: perhaps he had wandered off from somewhere, gone on a little adventure, and become lost. There was nothing remotely feral about him, though - his gentleness and sweetness was immediately apparent, even from his picture.

When I first saw him in his little SPCA cubicle by himself, he jumped down from his high place and ran up to me, looking up at me expectantly. I picked him up, he relaxed in my arms, and it was instant love. When I opened the door to the cat-carrier, he went in there like a shot.

I had my cat. He didn't have any fur on his shoulders, but I could see the healed puncture-marks where he had been so badly bitten. My daughter-in-law looked at him and said, "That's where his wings broke off."

The thing is, we had not even planned to have a cat. At all. The "cat-riarch", Murphy, had lived to be 17, and at that point we said "no more cats". I was into birds then, kept one for eleven years, and when Jasper died I got a new lovebird named Paco, a gorgeous, sweet little lavender-colored thing that I immediately became deeply attached to. The grandkids loved her immensely. When she was only about eight weeks old, I found her dead on the floor of the cage. I never found out what went wrong.

Why a cat? It was unlikely. My daughter had just gotten a new kitten, adorable. She kept saying, oh, c'mon you guys, you're pensioners, you need a cat. One day when I was feeling particularly ripped up about Paco, I said to Bill, "Jesus, we might as well just get a bloody cat."

Bill said, "We could get a cat." He said it hopefully. He said it with a sense of possibility. Perhaps we needed to revisit that "no more cats" decision of years ago.

It didn't take long. The fund of adoptable kittens was small, but Bentley was a year old and home-ready. His manners were impeccable, and my feeling is that he had a good home, but they didn't neuter him, and one day he followed the siren call. A bad thing, or a good thing? It was good for us.

Here is his SPCA mug shot. At this point he was named Theo, so he has had at least three names in his lifetime: 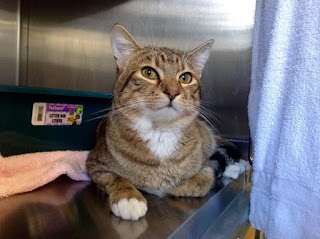 He has been the best cat, I mean, the best. Gentlemanly, self-possessed, even classy, like his name. Yet just as off-kilter and unpredictable as any feline. He is the master of the soft-paw stealth attack. Though the fur grew back on his shoulders where he had been picked up and thrashed, when he leans forward I can see little gaps underneath where the skin was too damaged. I call these his "duelling scars".

Why is Bentley on this blog so much? Hell, I'm getting views for the first time in seven years! But it's more than that. He changed my life. I never expected that, at all. 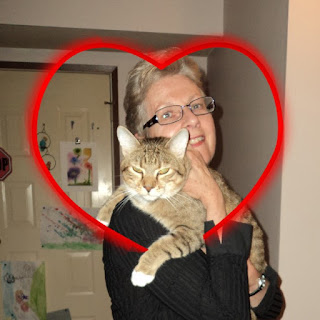 It takes a cat like Bentley to do that.

Salt frenzy: there IS a solution

Due to a couple of weeks of unseasonably cold weather, Vancouverites are scrambling around in their usual panic. White stuff is coming down out of the sky, and nobody knows what it is. This happens once every ten years or so. When it does, panic ensues. No one knows how to drive. No one knows how to WALK. There's this slippery stuff down there. The city offered citizens some free road salt, assuming everyone would be polite about it and take the allowed bucketful. That didn't happen.

The top story on CTV News (for several days running) had Tamara Taggert and Mike Killeen solemnly intoning about the Salt Frenzy resulting from Vancouver's "ice-pocalypse". To me, the whole thing looks fairly orderly, but who knows? If these people had been armed. . . (it would have been the United States). At least they didn't hit each other with their shovels.

I have the solution. Or at least, these people do. A handful of salt every few steps, with three adults and a child walking carefully in the salt-sprinkler's footsteps.

It works. But it wouldn't play very well on-air. Not enough frenzy, I guess.


Posted by Margaret Gunning at 10:54 AM No comments: