I had a reborn doll phase that lasted a couple of months, if that. It mostly consisted of watching videos of women pretending that elaborately-shaped blobs of silicone were real babies. It was so bizarre that I became transfixed, watching little Tamsyn get "sick" (some of these dolls actually heat up and probably vomit), and Kendrick going on a shopping trip to buy a tiny pair of Skechers. Reborn addicts love to dress up their "babies" and put them in full public view, waiting for that "Oh my God I thought it was - " reaction. Some even leave them locked in hot cars. I can't help but see this as very disturbed behaviour.

But it was fascinating. I wanted the experience without spending the money, so I bought these two, Alyssa and Alex, for about $20 each on eBay. I knitted clothing for them and everything, then very soon I chucked them into a plastic box. Once in a while I would see them on the closet shelf and a wave of shivering dread would go through me. These are uncanny valley dolls, for sure, as are all the reborns.

My dolls aren't life-size and don't have the soft, squishy bodies of the true "unliving" doll. But they are definitely influenced by them, as they are deliberately more creepily real in their detail: fuzzy newborn-like hair, big glassy eyes, eyelashes and a rosebud mouth.

I'm unlikely to play with these much, and I certainly won't treat them like babies. The women in the videos really do seem to believe they're real, and I wonder sometimes how their actual relationships might suffer from their obsession. There's lots and lots of justification going on, assuring everyone that it's a harmless hobby that only brings joy to your life. No mention of the tens of thousands of dollars the high-end version of these things cost.

But is it joyful to dash to the baby's room in the middle of the night to take her temperature, when the "baby" is a chunk of vinyl with a gizmo inside it that makes the sound of a heartbeat? Are these women open with other women, normies I mean, about their "hobby"? My guess is that they're secretive, which is why the "reborn community" on YouTube means so much to them. 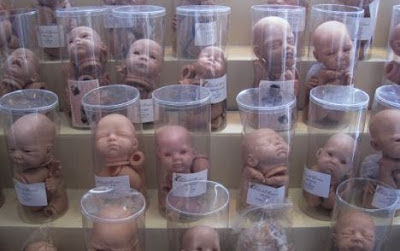 Posted by Margaret Gunning at 12:06 PM