Flying egg: the car from space

Schlörwagen
From Wikipedia, the free encyclopedia

The Schlörwagen (nicknamed "Egg" or "Pillbug") was a prototype aerodynamic rear-engine passenger vehicle developed by Karl Schlör (1911–1997) and presented to the public in 1939.

Schlör, an engineer for Krauss Maffei of Munich, proposed an ultra-low drag coefficient body as early as 1936. Under Schlör's supervision at the AVA (an Aerodynamic testing institute in Göttingen) a model was built. Subsequent wind tunnel tests yielded a drag coefficient of only 0.113, incredible then and still extremely impressive today. For a functioning model, a Mercedes-Benz 170H chassis, one of their few rear-engine designs, was used. The aluminum body was built by the Ludewig Brothers of Essen. Subsequent tests of the motorized model showed a slightly higher but still impressive drag coefficient of 0.186.  A year later it was unveiled to the public at the 1939 Berlin Auto Show. The project was shelved with the onset of World War II and mass production was never realized. In 1942, the prototype was fitted with a captured soviet propeller engine. The whereabouts of the sole functioning model remain unknown.


BLOGGER'S LAMENT. Would that they had found this thing! I have no idea how they would ever fit this little pillbug, which looks as if you could pick it up with one hand, with a "captured Soviet propeller engine", or what happened to it after that. Did they end up with a flying egg/pillbug/two-door Schlor, or just one big splat?

This was the only photo I found which presumably illustrates the hybrid, but as usual there is no information with it. 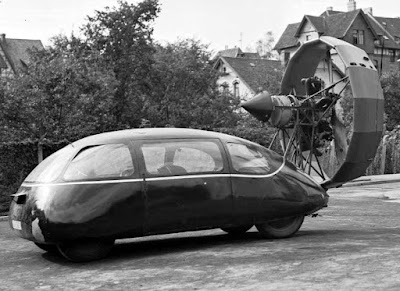 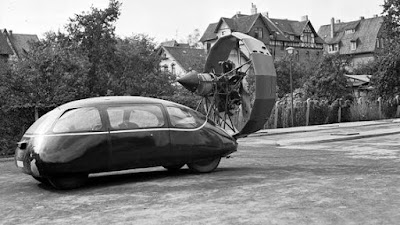 I also found a couple of photos of grey men in grey hats looking at the (mostly-grey) car. Things were pretty grey, back then. 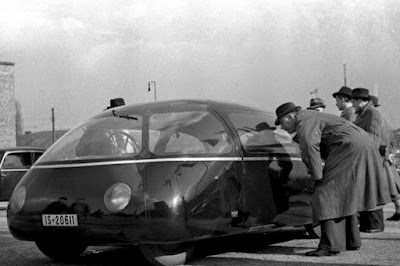 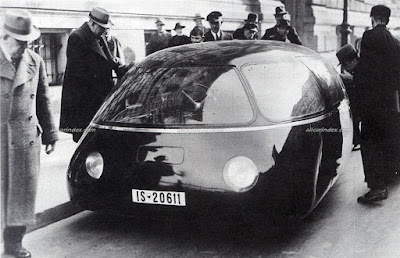 Posted by Margaret Gunning at 12:46 AM