Pinkwashed: why it pisses me off

Today I found this in my message file, and was about to delete it as trash until I realized it was a real message from a real Facebook friend:

Hi darling can you put a

on your FB wall, without comment, only a heart, then send this message to your chick contacts. This is for women to remember its the week of breast cancer prevention!

Hold your finger down on the message and hit forward.

I don't like tricksy little FB gimmicks at the best of times, but I have to tell you, I hate being "darlinged" by someone I don't even know. It's cheap and cloying. I especially hate "chick contacts" (who or what is that??), using "its" rather than "it's", and (most repellent to me) "Check your boobies!!"

Why must breast cancer stuff be so annoying and crass? They rake in many times the amount of other diseases, and have given the public the idea that it's the leading cause of death in women. It's not even close. The leading cause of death in women is heart disease. But who cares if a bunch of old ladies have a heart attack in a nursing home? Bouncing your boobies around in a pink tshirt is so much more alluring.

Stop, already. Enough, already. It's in poor taste, vulgar, and empty-headed. In fact, it cheapens a worthy cause. I don't want to hang out with "chick" friends who express themselves that way. They would irritate the shit out of me even if I had them. Whatever happened to dignity and sincerity? Why must it be "chicks" and "boobies"? Is this to make cancer cool, or show how unstigmatized it now is, or how we're OK with it, we really are, we're not scared of it any more cuz we're cancer warriors? Or did some publicity mill decide this was the best thing to do to squeeze the maximum dollars out of people by fostering ignorance and distortion of the truth?

The breast cancer industry is a mill, and someone besides patients is reaping most of the rewards. Think of all the $$ it takes to make those hideous pink buttons, the tshirts, pencils, mugs, etc. (and especially things like water bottles that are full of cancer-causing agents) which are so crucial to saving women's lives. It's a game of follow the bouncing boob. 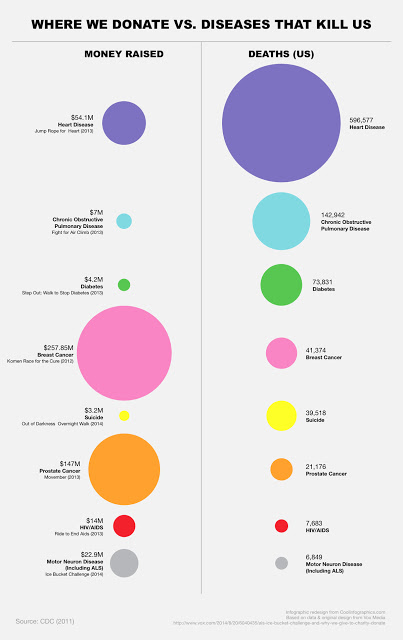 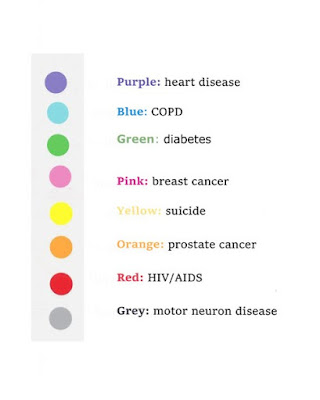 This-here infographic thingie tells the story. On the left side is the amount of money raised for a disease; on the right is number of deaths from that same disease. Since the print is too small to read, I made it easy for you, dear reader, with a little infographic of my own. Match the colour to the disease. It's that simple.

A quick comparison will show the disparate sizes of these various planets, and how human attention (and funding) has been drawn to certain diseases with slick advertising and celebrity endorsement.

I am not "against" funding breast cancer research, if that is what is going on. But I am also "for" funding mental health concerns, which look to be pretty much ignored. I am "for" funding heart disease research, which apparently isn't sexy enough to warrant much attention. And the others? When I was transcribing these names, I did not even SEE diabetes, almost passed it over entirely because the "money raised" dot was so small as to be nearly invisible. But compare that dot to the ominous-looking green planet on the right-hand side. 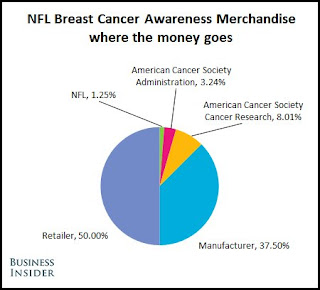 Have I made my point? I am SO, so sick of silly, ill-timed, usually crass or downright rude or embarrassing messages being forced on me. I hate chain letters, always have, always will, and am NOT willing to pass ANYTHING mindlessly on because, on the internet, you never know whether the thing is bogus or not. It may in fact be clickbait, a way for advertisers to get information from you about your likes and dislikes so that they may exploit you ever more ruthlessly.

Sounds familiar. Doesn't it? The following infographic of a pink soup can and a pink bucket of (likely) hormone-laced fried chicken are a case in point. 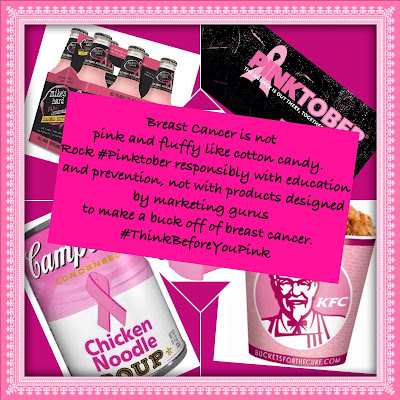 I found it a little hard to believe this particular person would forward something like that. I answered her message by telling her it wasn't breast cancer awareness week or month or ANYTHING, and that I did not like getting this empty-headed "hey, girlfriend! Squeeze your boobies!" shit. I didn't use those words, of course. I tried to be polite. Ironically, the person who supposedly sent me this thing was an editor I used to try to impress with novel queries, in another lifetime.

I can't quite wrap my head around the irony of the fact that, in a completely anonymous note that might have started with some truck driver in Minneapolis, she addresses me as "darling". 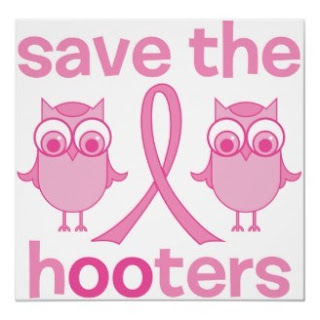 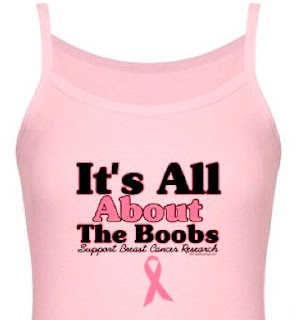 POST-BLOG QUOTE: I'm posting a link to an article which, in my mind, hits it right on the head: it expresses exactly why I feel so offended by the glibness and vulgarity of these "booby" messages that are so ubiquitous, and forced on us even by the most unlikely people. This is just a small excerpt.

We must honor women’s rich complexity and full diversity, rather than obsess over narrowly defined body parts as the focus of breast cancer campaigns.

In other words, gals, it ISN'T all about the boobs. We do NOT need to "save the hooters". We need to save human lives. That's what it is all about.

Why isn't anybody getting it?

POST-BLOG. I did hear back from my former editor, who said she passed the message along because it was from a good friend. She also said "it might be bogus" - meaning she didn't question it, just forwarded it to all her "chick contacts".  This alarmed me. I have already received some pretty absurd shit in the name of breast cancer "awareness" (and by now, who ISN'T aware of breast cancer? Is it a huge shock to most women that they should get mammograms and do periodic self-examinations?). And a lot of it DID turn out to be bogus, but in at least one case the friend refused to admit it.

(From a women's health page):

Wondering why your Facebook feed is suddenly covered in little heart emojis? Unless you have a number of extra-affectionate friends, it likely has something to do breast cancer awareness.

This isn't the first time we've seen this trend. It's actually resurfaced a few times over the years, but generally during Breast Cancer Awareness Month in October. The concept is as follows: Post a heart on your female friends' Facebook walls, then send a private message explaining that the heart is a subtle reminder to get their breasts checked for lumps. Then, the goal is to cause a ripple effect—your friends posts hearts on their friends' walls, their friends posts on other friends' walls, and so on. They're also supposed to post the heart on the same woman who sent them the message. But, the catch is, if any guys ask what the emojis are all about, the recipient is supposed to stay silent, since the game is meant only for women.

The trend has been stirring up some controversy. Critics on social media find the whole concept offensive, concerned it’s turning breast cancer into a game. Others say the cryptic message is too opaque to do any good, and argue it's counterproductive to try spreading awareness about a condition by staying silent. Rather than use this subtle tactic, some suggest it would be more effective to post something more direct, like a simple "Check your breasts."
(A pissed-off P. S.: why is the game "meant only for women"? Guys get breast cancer too.  I know a guy who has it. This just adds to the stigma men feel by excluding them from "breast cancer awareness". Come to that, the secretiveness of this coy little game stigmatizes women with breast cancer, too, by rendering it "unmentionable". FAIL - all around!)

Posted by Margaret Gunning at 4:15 PM