Christmas cat gifs? Oh my, yes. Always, but especially when the season and the ridiculousness of the human condition makes me owly and disillusioned.  Our first cat Murphy pulled the tree over - that was before we had video, sorry - but it must have looked something like this.

Short takes. I would imagine if you had a multiple-cat household, nothing would stay decorated for long. The cat is a creature of chaos. It's what we love about them. They rip apart the tinsel and gaudiness and expose it for what it is (tinsel and gaudiness). Now give me my fish.

Here is where it really heats up.

Videos of  kids getting kittens are totally different from videos of  kids getting puppies. In the puppy ones, the kid ALWAYS cries, usually hysterically. I've never seen a cat one where anyone cries. Just an observation. But no one ever talks about a "faithful cat", do they? Cats are anarchists, they're subversives and never "obey". They allow you to dwell in their presence. You can't cry over that.

You can go "eeek! Eeek! Eeeeeeeeek!", however.

How to wrap a cat. I'm going to try this with Bentley. I am. He loves his carrying case, so who knows. This may be a ragdoll cat however, and you can do anything you want to a ragdoll cat. The gif logo says "Flippycat.com", which may be significant.

NOT how to wrap a cat.

Taken from an ad, so cheating a little, but still pretty cool. Since no one has ever trained a cat, the camera must have waited for them.

The Jingle Cats are very stupid, and I have the original CD and play it every Christmas. To date, no one has liked it. 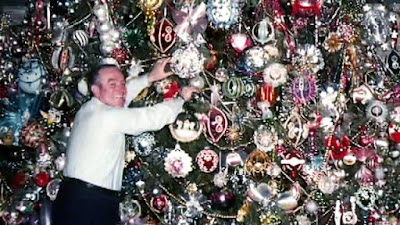 Posted by Margaret Gunning at 11:19 AM No comments:

It just gets more incredible. I was SURE I was down to the bottom of the barrel with that Godawful Punch and Judy show with the Hitlerian Santa. But no! This is a truly unbelievable cinematic abomination starring, in one movie, Santa and Satan. They duke it out. They actually vie for ascendancy and control of the world, if not the universe, while little children look on. It's all extremely weird, even eerie. The movie was made on the cheap in Mexico and later dubbed into a kind of English.  I know Mexico is very big on all that Day of the Dead stuff, the sugar skulls, etc. But seriously? Here, the devil wears a skirt and dances badly. Santa just wheezily ho-ho-hos, as always.

I won't inflict the whole movie on you. I've made a few choice gifs, which were hard to make because the length of the movie necessitated very large gif files. So these may or may not download, may download slowly, or may play jerkily until they decide to play correctly.

If you watch the gifs, you will either find yourself wanting to see the whole thing, or sweating with gratitude to have gotten away singed, rather than roasted by this Yuletide atrocity.

Just the juxtaposition of the Devil with Jolly Saint Nick is grotesque. The pieces just don't fit. That's why I made these gifs, to get you to believe me. Santa looks catatonic and his suit looks like it is made of vinyl, but that is beside the point.

Here is where Santa begins to realize that something is seriously amiss. He lights a sort of firecrackery-looking thing (Mexico is very big on firecrackers, too, sometimes with tragic results), which spins around and around. So does the devil, going into a weird kind of choreography.

The thing about this devil is, he has a really shitty costume. Long red underwear, it looks like, and red body makeup, but with these really loose, rattly ears. Maybe so he won't scare the kiddies too much. But just having the Prince of Darkness in a Christmas movie is too much for me to wrap my head around.

This is where Santa demonstrates the principle of "love thine enemy" by firing a cannon at his nemesis. Ah, the heavenly peace of Christmas, where God and the Devil shoot it out in the living room! Santa cackles with glee at the direct hit.

In retaliation, the devil pulls a knife on Santa - no, wait, it's a pair of scissors - and punctures some sort of bag of water, or vodka or some shit like that. Santa turns around and spits on him.

And I can't go on here. Whenever I close my eyes now, I see red.