Caitlin is out front at the start, then on the left side from 0:26 to 0:52. After that, you can follow her easily because she is the BEST DAMN DANCER UP THERE! 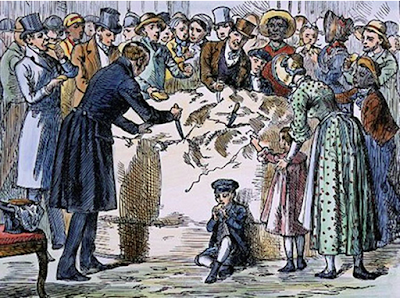 I don't know how I get myself into these moods. Dragging bottom emotionally for no reason that makes any sense, except that it's December, I thought I'd look up some Christmas poetry. I found one by John Betjeman that was quite nice, if long - but it fell apart by going all religious at the end, with babies in stables, etc., and ending with "God was man in Palestine/And lives today in bread and wine". Way to wreck it, John.

William Topaz McGonagall's atrocities occurred to me, and I wondered if he had done any Christmas poems (for the only thing better than a good Christmas poem is a bad Christmas poem - but it must be monumentally bad, not just dirty or jingly or a stupid takeoff of Clement Moore). But I've already "done" McGonagall in past posts, and I'm a bit sick of him, to be honest.

I found a horrible Robert Frost poem in which a man pounds on his door of a snowy evening and asks if he can cut down all the lovely snow-sparkling pines on his property to sell as Christmas trees. And here Frost hums and haws over it, turns it over in his mind, thinking: well, here are the advantages in it; and hmmm, here are the disadvantages in it; and: AIIIIIEEEEEK! Cut down all your friggin' trees?? What are you thinking? I guess back then it must have seemed that there were trees enough, that they were endless, and just a crop to be managed like any other. But I was so upset at this point that I didn't even read to the end.

Discouraged, I threw away Christmas and widened my scope to include any old poetry that was sublimely bad, but it's hard to find truly awful stuff. I found articles quoting three or four weak lines in, say, Tennyson. Auden once used a bad adjective, and somebody found a pun in Shakespeare, comparing an orange to Seville (or was it servile?). Well, who gives a shit about that? I wanted bad, and I wasn't getting it. 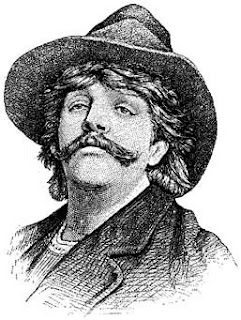 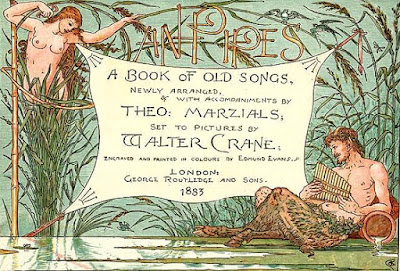 As if this bounty weren't enough, I found these little notes attached to an article about him, claiming that Marzials, not McGonagall, was the worst poet in the English language:

"Theo Marzials, the last of the Victorian aesthetes, who lived on in rural retirement, addicted to beetroot and chlorodyne (morphia, chloroform and prussic acid), for two decades after the world thought him dead. In the 1870s, as a young man with long hair, flowing moustaches and a silk bow tie over his lapels, he worked at the British Museum. According to Max Beerbohm, the great Panizzi himself, founder of the round Reading Room, was one day surprised to hear a shrill voice crying from the gallery: "Am I or am I not the darling of the Reading Room?". . .  Marzials almost outlived danger. "On the last occasion when I happened to catch sight of him, looking into a case of stuffed birds at South Kensington Museum, he had eaten five large chocolate creams in the space of two minutes," wrote Ford in 1911. "He had a career tragic in the extreme and, as I believe, is now dead." But he wasn't. He was living in a farmhouse room in Colyton, Devon. The bed, occupied day and night, had a saucer of sliced beetroot beside it, the smell of which mingled with the fumes of chlorodyne, the smoke of an oil lamp and the steam of a stockpot perpetually simmering on the
stove."

This is disjointed as hell because I've edited 300 or so words out of it, so who knows who "Ford" is, but then again, who cares? The important thing is that I have found a truly horrendous, a harrowingly bad poet, and this opens the door to all sorts of posts about him. Or not. Depends if I can find anything else. Oh, here's one -

The Ghost of Love

The wan witch at the creepy midnight hour,
When the wild moon was flying to its full,
Went huddling round a damned convent's tower,
From out the crumbling slabs or tombs to pull
Some lecherous leaf or shrieking mandrake-flower.
Beneath she heard the dead men's voices dull;
Around she felt the cold souls creep and cower;
In hand she held a grinning damned's skull!

Then through the ruin'd cloisters, strangely white,
T'wards the struck moon, all swathed in colod grave-bands,
She saw dead Love wringing his hollow hands,
And gliding grimmer than a dank tomb-light.

And with a shriek she rush'd across his path--
And now the hell-worm all her body hath! 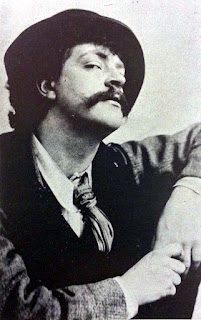 The problem with this one is, as Zero Mostel says to Gene Wilder in The Producers: "Nah, it's too good." In fact it's neither good nor bad, and is as purple as most Victorian stuff was. But it strikes me as bargain basement Gerard Manley Hopkins, and even a pale photocopy of Hopkins has a certain power behind it.

I don't know what "colod grave-bands" are, but maybe they played gigs at the cemetary. Were they people of "colo"? We'll never know. (Could be a typo, also.) So even at being the worst, Marzials wasn't the best. Or the other way around.

MARZIALS DISH. This was all I could find about his sex life, and it came from Wikipedia so it MUST be true:

"The relationship between Marzials and fellow author Edmund Gosse is debated, with some claims that their relationship was more than platonic."

We have seen the Queen of cheese,
Laying quietly at your ease,
Gently fanned by evening breeze --
Thy fair form no flies dare seize.

All gaily dressed soon you'll go
To the great Provincial Show,
To be admired by many a beau
In the city of Toronto.

Cows numerous as a swarm of bees --
Or as the leaves upon the trees --
It did require to make thee please,
And stand unrivalled Queen of Cheese. 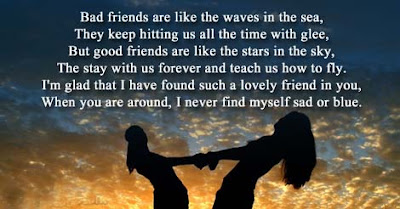 May you not receive a scar as
We have heard that Mr. Harris
Intends to send you off as far as
The great World's show at Paris.

Of the youth -- beware of these --
For some of them might rudely squeeze
And bite your cheek; then songs or glees
We could not sing o' Queen of Cheese.

We'rt thou suspended from baloon,
You'd cast a shade, even at noon;
Folks would think it was the moon
About to fall and crush them soon.