Posted by Margaret Gunning at 10:28 AM No comments:

Smoke and eat, eat and smoke 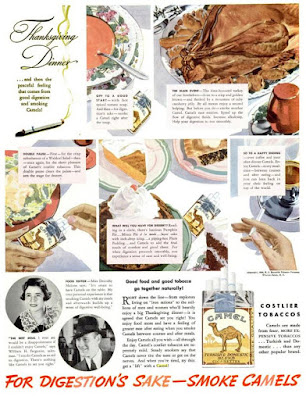 Thanksgiving Dinner… and then the peaceful feeling that comes from good digestion and smoking Camels!

OFF TO A GOOD START — with hot spiced tomato soup. And then–for digestion’s sake–smoke a Camel right after the soup.

THE MAIN EVENT — The time-honoured turkey of our forefathers–done to a crisp and golden brown–and flanked by a mountain of ruby cranberry jelly. By all means enjoy a second helping. But before you do–smoke another Camel. Camels ease tension. Speed up the flow of digestive fluids. Increase alkalinity. Help your digestion to run smoothly.

DOUBLE PAUSE — First–for the crisp refreshment of a Waldorf Salad–then–once again, for the sheer pleasure of Camel’s costlier tobaccos. This double pause clears the palate–and sets the stage for desert.

WHAT WILL YOU HAVE FOR DESSERT? Reading in a circle, there’s luscious Pumpkin Pie… Mince Pie a la mode… layer cake with inch-deep icing… a piping-hot Plum Pudding… and Camels to add the final touch of comfort and good cheer. For when digestion proceeds smoothly, you experience a sense of ease and well-being. 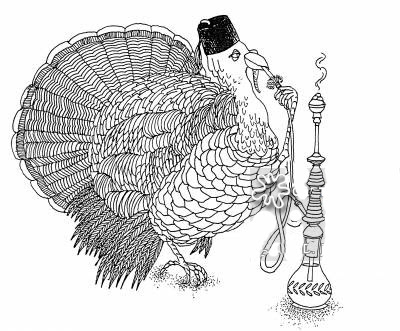 SO TO A HAPPY ENDING — over coffee and your after-dinner Camels. Enjoy Camels–every mealtime–between courses and after eating–and you can lean back in your chair feeling on top of the world. 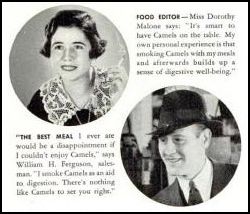 FOOD EDITOR — Miss Dorothy Malone says: “It’s smart to have Camels on the table. My own personal experience is that smoking Camels with my meals and afterwards builds up a sense of digestive well-being.”

“THE BEST MEAL I ever ate would be a disappointment if I coldn’t enjoy Camels,” says William H. Ferguson, salesman. “I smoke Camels as an aid to digestion. There’s nothing like Camel’s to set you right.” 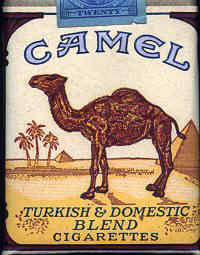 Right down the line–from explorers living on “iron rations” to the millions of men and women who’ll heartily enjoy a big Thanksgiving dinner–it is agreed that Camels set you right! You enjoy more food more and have a feeling of greater ease after eating when you smoke Camels between courses and after meals.

Enjoy Camels all you wish–all through the day. Camel’s costlier tobaccos as supremely mild. Steady smokers say that Camel’s never tire the taste or get on the nerves. And when you’re tired, try this: get a “lift” with a Camel!

Camels are made from finer, MORE EXPENSIVE TOBACCOS . . . Turkish and Domestic . . . than any other popular brand.

Blogger's note. Damn. As usual, I am late for Thanksgiving, but this one (complete with full text) is too good not to post, even a few days late. It's one of the most astonishing cigarette ads I've ever seen.

In the bad old days, nothing was more horrible than sitting next to a smoker at a banquet, or even in the same room with smokers in a restaurant. Never mind if they were corralled in the "smoking area" (ha ha). Smoke like, uh, er, drifts in the air, see? (Why didn't they know that then? They didn't want to offend smoking customers.) It doesn't matter if you blow it in the opposite direction. It migrates freely all over the room, the sulphurous stink of it ending up in your face, and there's nothing you can do to get away from it. 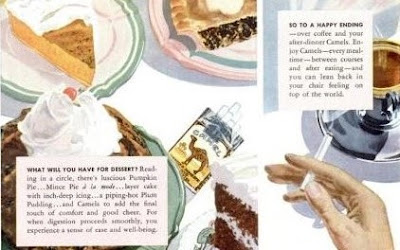 It had to be scientifically proven beyond a shadow of a doubt that you could drop dead from cancer even from a small exposure to second-hand smoke - that it was, in fact, more deadly than the stuff you sucked in with your lips like an infant with a bottle of formula - before "smoking sections" were finally relegated to the past, along with the socially-acceptable and even expected habit of sucking on cigarettes before, after and even during a festive dinner. 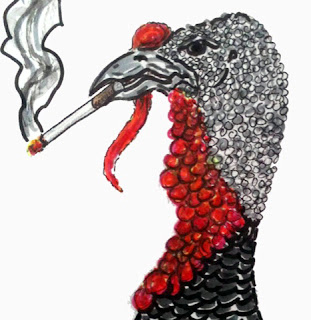 According to this yummy description, the average person sitting at the groaning board should consume FIVE cigarettes to achieve the desired "ease and well-being", not to mention improved digestion (WTF???). I just don't know where to start here. The purported effect on mood - calming you down and/or giving you a lift, presumably at the same time - is even more alarming, as if cigarettes were just an early form of antidepressant.

When I saw just the bottom corner of this ad, on Pinterest or somewhere, I thought, no. It's a parody. It just COULDN'T be real. But oh yes. It's a time machine of attitudes that I am profoundly grateful are dead. But it makes me wonder how many other horrible things we're still doing that one day will be seen as totally barbaric. Back then, if you'd pointed out to a hostess that smoking at the table makes people die in horrible agony, she'd probably claim you were spreading nasty lies.

This will be my last vintage cigarette ad for a while, because it's getting old now. I have to stop running curiosities and start actually writing again, which is torture sometimes, but somebody might actually read it, and I must be prepared. I almost never look at my views, but today I did, and I got well over a thousand views for a piece I wrote a couple of years ago about Elmer the Safety Elephant. You never know what people might find interesting.