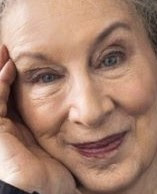 Margaret Atwood "can't write a novel," according to Norm Macdonald

After kicking off something of a one-way Canadian literary feud, comedian Norm Macdonald has deleted a series of Twitter rants in which he called author Margaret Atwood “a no-talent mountebank bent on fooling fools” and other insults.

Some of the tirade from Macdonald, a former Saturday Night Live star, came late Tuesday night and Thursday morning of this week, after Atwood tried to console Americans after the election of Donald Trump.

Atwood: “Just like the Wizard of Oz, Donald Trump has no magical power” 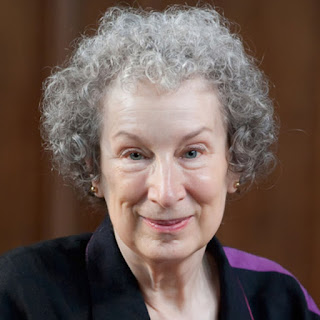 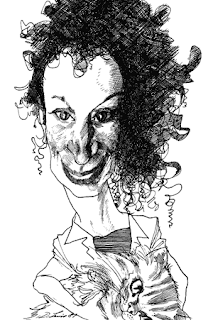 Macdonald: “You make a very good, if utterly obvious, point. So, you’re saying he DOESN’T have magical powers. Thanks.”

And then Atwood, a Toronto resident, tries again to console American readers with: “Dear Americans. It will be all right in the long run. (How long? We will see.) You’ve been through worse, remember.”

Atwood, winner of the prestigious Booker Prize for Literature, urges readers to take practical measures to help them cope with life under Trump, to which Macdonald adds: “How to SURVIVE in the era of Trump, lady? How about staying in your house with your money?”


Earlier, the 57-year-old Quebec City native observed, “Canadians have frauds and imposters just like everyone else. Most people in the arts are charlatans. One is @MargaretAtwood.” Macdonald later deleted the Atwood run of tweets (though they remain on his Facebook page), as he has done in the past with stories about meeting Bob Dylan, helping to write the SNL 40th anniversary special and more.

The comedian has a well-received book of his own currently out, Based on a True Story: A Memoir. Despite the title, Macdonald has described it, on Twitter and elsewhere, as a novel.

The shots he took online at Atwood went beyond her advice on life in a Trump America.

When Atwood sends a reader a handwritten quote from her novel, The Handmaid’s Tale, Macdonald jumps in and posts: “Oh, bad writing scribbled on a piece of paper. Well, who wouldn’t want that?” 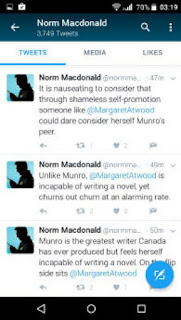 Several of her fans jumped in to defend her. One posts: “as if I don’t have enough to deal with Norm hates Margret (sic) Atwood??”

He then adds: “It isn’t her fault and I’d never have anything but pity for the talentless. But the Canadian school system makes you read her.”

One Atwood defender tries for some sort of anti-Trump solidarity but Macdonald has none of that.

“@normmacdonald In an authoritarian regime, the most important thing is whether you are ‘one of them’ or ‘one of us,’ ” he tweets. 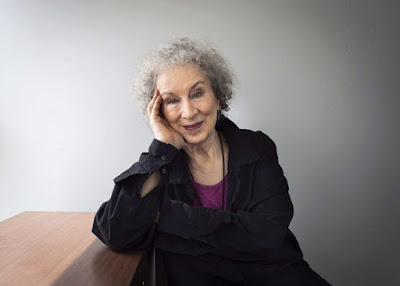 Macdonald accuses Atwood of “chasing celebrity and promoting anything for a buck” and compares her unfavourably to Canada’s Nobel Prize-winning Alice Munro.

“It is nauseating to consider that through shameless self-promotion someone like @MargaretAtwood could care consider herself Munro’s peer,” Macdonalds writes.

“Unlike Munro, @MargaretAtwood is incapable of writing a novel, yet churns out chum at an alarming rate,” Macdonald continues.

“Munro is the greatest writer Canada has ever produced but feels herself incapable of writing a novel. On the flip side sits @MargaretAtwood,” Macdonald continues.

Atwood, 77 ,did not respond to the Star’s request for comment.

Posted by Margaret Gunning at 11:50 PM No comments: