President Trump: are you ready for this?


Posted by Margaret Gunning at 3:42 PM No comments:

Call this an extreme example of internet strangeness. This is an excerpt (a short one, at that) from something called Vaught's Practical Character Reader. Someone apparently found/scanned this very old and dusty book about - what? Phrenology? That's the assessment of character by feeling bumps on a person's head. So it can't be that. This is more like - well, what IS it? Face-reading? Making stuff up, more-like, based on a whole lot of strange drawings of heads and faces. 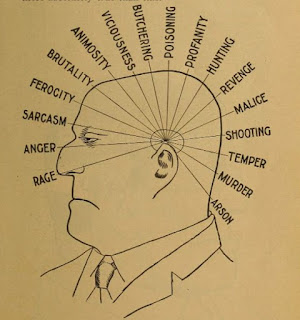 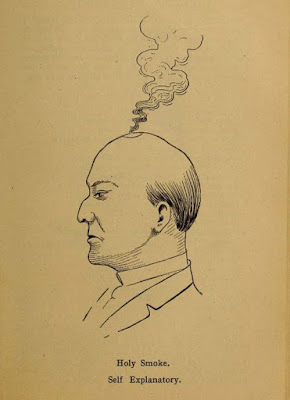 So if someone's face is a certain shape, well, good. They're obviously a worthwhile person. If not, get away from them! A woman is plainly a rotten mother because she has a sort of dip or curve in her head. On the other hand, HE would make a good husband because of the shape of his ears.

And if a bee buzzes around your head, you're going to be President.

A number of people in these illustrations have holes in their heads, or what looks like tape wrapped around them. Strange things, words, spring out of the heads of others. Eyeballs sprout out of someone's scalp. Very little is explained, though a lot of it is described as "needs no explanation".


None of this makes a damn bit of sense! 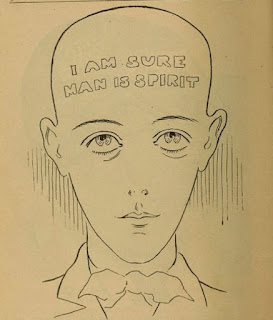 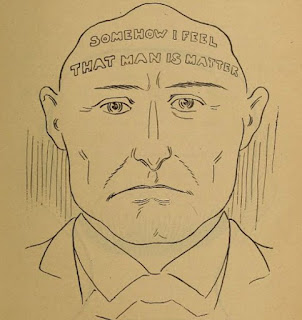 What this does point to however is something we still do, consciously or otherwise. We assess, or, more likely, judge others by their appearance, particularly facially. This usually happens in a split-second, upon meeting someone for the first time. We file away that impression and may stick to it, unless something else dissuades us. 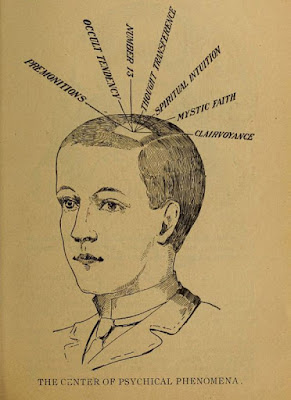 In the case of Vaught's Practical Character Reader (and who is this Vaught, anyway? I don't like the look of this guy), it's all set in stone, unchangeable. Even if the fat man lost weight, he'd still be evil.

We now know that not one jot of this is true. People with big heads aren't evil. People with small heads aren't evil. (Note. Donald Trump IS evil - Ed.) Steam doesn't come out of people's skulls (too often). An "honest head and face" isn't necessarily a perfect oval. This is something that someone made up, perhaps to reassure themselves and/or others that their prejudices were correct. 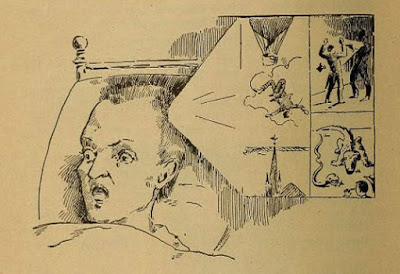 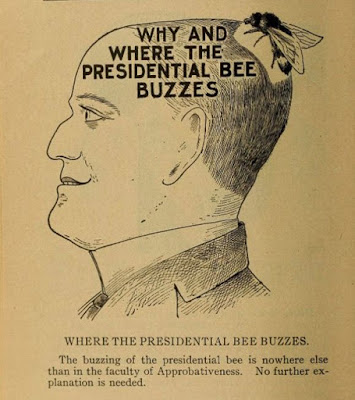 This last one, not explained at all, has to be the strangest of all, but perhaps it's saying that if you set a bee loose in a room full of politicians, it will make a bee-line to the most suitable candidate. This system is more logical than democracy, or at least yields more favorable results. It might have worked in our favour last night. Instead, we had a stampede of barbarians at the gates, and all was lost for those who live by reason.

By many people's reckoning, this means that racism, a low grumble in a huge part of the world, might just rise to a mighty roar (as it has so many times before in history), unchecked by the counterforce of reason. It's a grim fact that the KKK voted Trump, and celebrated mightily last night.

What does this have to do with an old brown-paged book about face-reading? There is a connection.

The so-called innocent analysis of character by facial features isn't really innocent at all. It led to atrocities such as the dismissal of both Irish and African peoples as basically worthless, of "low type". If you're of low type, obviously you can't hope for anything better (so get away and keep your hands off MY resources). 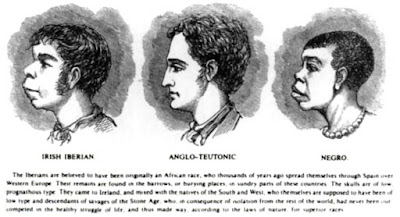 The Iberians are believed to have been originally an African race, who thousands of years ago spread themselves through Spain over Western Europe. These remains are found in the barrows, or burying places, in sundry parts of these countries. The skulls are of low prognathous type. They came to Ireland and mixed with the natives of the South and West, who themselves are supposed to have been of low type and descendents of savages of the Stone Age who, in consequence of isolation from the rest of the world, had never been (?) competed in the healthy struggle of life, and thus made way according to the laws of nature for superior races. 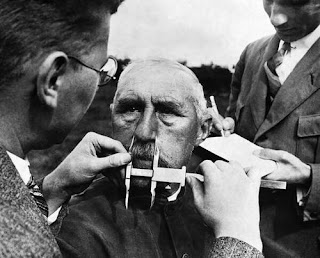 I don't like what I'm seeing now, I don't like how the White Right just seized back power from the so-called liberals. There's a kind of civil war going on. Maybe we'll be drawing up facial comparison charts again. Or taking measurements of facial features. They did that once, remember? It kind of had something to do with your future. Or lack of one.

Posted by Margaret Gunning at 2:30 PM No comments: