The face in the middle: or, am I clowns?

This picture reminded me of a certain non-joke I kept hearing a few years ago, mainly because I heard it wrong. The original was quite poignant, but it was hashed or rehashed in one of those dystopia/sci-fi movie things that I hate so much, the Watchmen or something.

After Robin Williams died, it became apparent to most people that this sad-clown joke kind of explained the whole thing. To paraphrase it badly:

This was supposed to explain the death of Robin Williams. 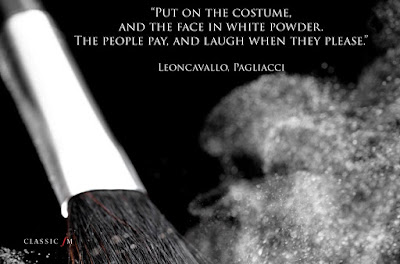 Robin Williams died because he had something called Lewy Body Dementia which is far worse than Alzheimers and slowly eats its victims alive. He was a wraith, a shell of himself, and his "suicide" was his way of taking a final bow after his life had already come to a close. Could he have gone on? There was no "on" to go to. People have chosen physician-assisted suicide for less.

Though his Parkinson's disease is very rarely mentioned, no one ever says anything about the Lewy Body because it came out in the autopsy results a few weeks later. By that time, everyone had lost interest. He was a tragic clown, that's what he was, it was all settled, and besides, what the hell is all this Lewy Body stuff? He was romanticized as a tragic victim of Hollywood and his own excesses. The truth is, he died of a horrible disease.

Thus, yet another opportunity for the public to learn something landed in the sewer. 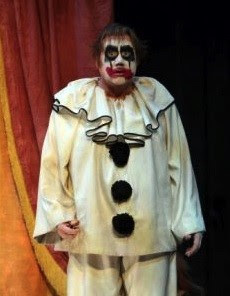 The famous picture of Chaplin and Einstein at the top of this post surfaced today as I perused the Weekly World News - oops, I mean The Vintage News, my current favorite source of internet comedy. There was a caption featuring a supposed conversation they had. Something like this:

Einstein: Must be nice to have the whole world love you when you never say a goddamn thing.

Chaplin: Nobody knows what the hell you're talking about, so would you please shut up?

I am sure they never had this conversation! I am making it up out of whole cloth.  But I did find many, many versions of it in many languages on internet memes with photos of the two of them together, two stuffed shirts, one the Stuffed Shirt of Physics and the other the Stuffed Shirt of Silent Comedy. So I guess it brought back the clown thing, the bad joke endlessly replicated and memed to death.

But that's not why I'm posting this. 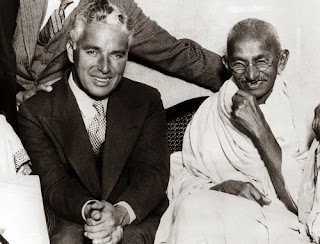 As usual, the comments section in The Vintage News is the best part (especially that guy who always strenuously defends Hitler. His Facebook page has all sorts of war medals and shit on it.) There were the expected comments about what beloved figures Chaplin and Einstein were, along with people telling each other to fuck off (for no reason at all except that they could), and then someone said, "wait. What is that creepy face in the middle?"

Can you see it? It seems to be peeping over Chaplin's shoulder.

Good question! Secret Service? I wondered. These guys may or may not have been wearing bulletproof vests under their tuxes. But maybe not! Einstein kept trying to work out how he could make himself into a time traveller, while Chaplin wanted to dominate whatever time he had here and now. Meantime, here is this guy! This mysterious figure - in dark glasses, is it? And on the left, you see more shadowy figures. I keep thinking I see Don Corleone of The Godfather.

These are either beings from another dimension, or - time travellers.


I also want to set something straight that everyone gets wrong. The joke about the clown - they always call him Pagliacci. That means "clowns". So the punch line is, "but Doctor, I AM clowns." Unless you're making one of those wretched unfunny jokes about "schizophrenia", it makes no sense. "Pagliaccio" would be closer, but it means "Clown". "I am clown". The main character in the opera Pagliacci is called Canio, but no one would say, "I am Canio". Sounds like a dog or something.

Another thing. I don't know how many times I've heard Leoncavallo's opera called I Pagliacci.
That means something like "I clowns", which is worse than "I am clowns". I'm not sure where this got started, but there are even excerpts from the opera posted on YouTube labelled WRONG, and it  just pisses me off.

The aria posted above isn't from Pagliacci and it isn't by anyone alive. But it is my favorite aria, and by one of my favorite singers, who did not survive long enough to prove his true greatness. As a tenor, his voice would have bloomed some time in his late 40s, so he had all his best years ahead of him.

nza died suddenly the morning of October

,

, whenhe was justthirty-eight years old. The particular physicalcatastrophe responsible for silencing forever a voice judged“black and warm and dead on pitch,”
1p249
“a voice such as isheard only once in a hundred years,”
1p20
will never be known.What remains of Lanza’s medical record is far too meager toreveal the secret of his premature death, and an autopsy wasnot performed. All we know for certain is that his health wasalready unraveling when he entered the Valle Giulia Clinic onSeptember

,

, to rest and lose weight. The day beforehe died he was fit enough to sing “E lucevan le stelle” from
Tosca
for the clinic staff, and the next morning to conversewith his wife and his agent on the telephone. Shortly after thetelephone calls, he was found “reclining on the divan [in hisroom], motionless, extremely pale and with his head bent to
Posted by Margaret Gunning at 11:51 PM No comments:

Lazy Cat Doesn't Get Up to Drink Water

Posted by Margaret Gunning at 10:56 AM No comments: