Red herring: Charles Cros and the invention of the phonograph 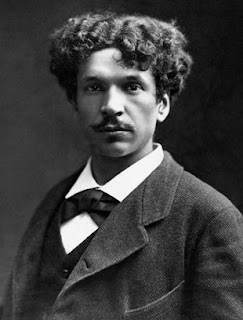 Charles Cros inventor of the phonograph

This is just one of those back-into-it-sideways pieces. I don't even know exactly how I found it, but I stumbled across a bizarre poem about a herring.

Was it a kid's poem? I don't know, but it was full of repetition, and didn't make a whole lot of sense to me. The original had been in French.

The name Charles Cros came up.

Or did it happen another way? I've been on yet another of my Edison-cylinder-inspired hunts on YouTube. There are now exactly one billion, give or take a million, posted there, unlike the first time I hunted for them in 2003 (for my novel Bus People, "now showing on a blog near you!"). Did I stumble onto Cros and his strange story of near-greatness while trying to dig up stuff about early recording technology?


Everyone knows Edison scooped other people's ideas by patenting them before anyone else (I mean people less savvy in the ways of business, or just less ruthless/arrogant, or more ethical than Edison). Cros was one of the contributors to the technology that eventually led to the phonograph, to which he gave the delightful name paleophone. The name reminds me of that song Telephone to Glory: "you can talk to Jesus on his Royal Telephone" - something that connects you to another time and dimension of reality.

Alas, the paleophone was not to be. It never really got off the drawing board.  I think a lot of people contributed to the invention of sound recording, not the least of whom was Emile Berliner, whose disc system (grooves on one side only!) eventually usurped Edison's unwieldy wax cylinder as the accepted format. 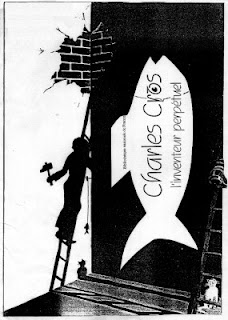 Anyway, this guy Cros, whom I had never heard of up 'til now, sounds more like a surrealist/Dada artist than an inventor. I've lifted this little piece from a site (link above! I'm being more conscientious about posting links to originals now, though I assume that if anyone actually read this blog, I'd be in trouble for it anyway) which tells it in fewer words than I ever could. It leaves a multitude of questions unanswered, for example, why did Cros only live to be 44? And to be honest, I don't want to look it up.

The kipper poem - the herring - the RED herring, some people call it - is supposed to have some sort of hidden meaning. Cros wrote a lot of other poems besides, but I don't have time for them here.

Or did he? Was it perhaps - as some claim - the poet, inventor, surrealist and visionary Charles Hortensius Emile Cros that gave the world this new invention in sound recreation?

Charles Cros was born 1st October 1844. A precocious boy, at the age of 16 he was teaching Hebrew and Sanscrit, and two years later was a Professor of Chemistry.

His imagination and genius for invention was unstoppable. At the Universal Exhibition of 1867 he presented his automatic telegraph system. He proposed a solution to the problem of processing photographs in colour. And on 30 April 1877 he delivered to the French Academy of Sciences a sealed envelope containing a document describing a procedure for the‘registering and reproduction of phenomena perceived by the ear’. He gave his invention the poetic name of Paleophone - Voice of the Past.

Poetry, indeed, was in his soul. He was friends with Paul Verlaine, and with Arthur Rimbaud, who Verlaine once shot with a revolver in a moment of drunkenness. He rubbed shoulders with Manet, Renoir and Sarah Bernhardt. And in one of his surreal and visionary moments, he became convinced of the existence of large cities on Mars and Venus, and tried to persuade the French government to construct a parabolic mirror in order to communication with our extra-terrestrial brothers and sisters.

But it was his Paleophone that most preoccupied him. He tried to find financial backers, but without success. On 10 October 1877, an article in a publication La Semaine du clergére named the invention 'the Phonograph'. But rumours were circulating that the famous Edison was also developing a system for recording sounds. Did he see the article in La Semaine du clergé? That modern-day Repository of All Human Knowledge, Wikipedia, says not. But Charles was taking no chances.

He rushed to the Academy of Sciences and requested that they open at once the sealed envelope in order to make public his indisputable claim to the invention. The envelope was duly opened on 8 December. But sadly it was two days too late, for the great Thomas had already given the first public demonstration of the recording of a human voice. Then on 17 December Edison registered his patent. 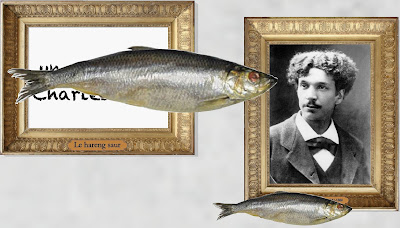 In the years that followed Charles became more immersed in his poetry. He gave public readings of his poems, and many decades after his death in 1888, one of his verses, Sidonie a plus d’un amant, was recorded by screen icon and tireless campaigner for animal rights (elephants included) Brigitte Bardot.

Once upon a time there was a big white wall — bare, bare, bare,
Against the wall there stood a ladder — high, high, high,
And on the ground a smoked herring — dry, dry, dry,

Posted by Margaret Gunning at 11:18 AM No comments: