Stranger than strange: Spectacle (the Life of Harold Lloyd)


Well sir, I saw this today and just couldn't believe it. Hey, I wish them all well with this endeavour, even if it's a tad unusual. I can't say as I see the actor playing Harold as particularly authentic, but Oliver Hardy is pretty good. (But where's Stan?). There is a strong emphasis on the Shriners, and at first I wondered if it was going to be one of those conspiracy-theory things. But probably not. The music is amiable, if a bit rough around the edges. I think the upcoming movie version of The Glass Character will have a bit more polish. It's in good hands with Ron Howard.

Posted by Margaret Gunning at 4:42 PM No comments:

The Hapsburgs: it's all explained here

Many, many years ago when I was twenty-three

For now my daughter was my mother, 'cause she was my father's wife

And to complicate the matter, even though it brought me joy

I soon became the father of a bouncing baby boy

My little baby then became a brother-in-law to dad

And so became my uncle, though it made me very sad

For if he were my uncle, then that also made him brother

Of the widow's grownup daughter, who was of course my step-mother 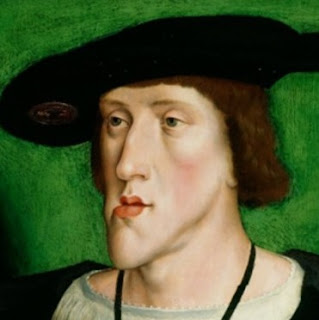 And he became my grandchild, for he was my daughter's son

Because although she is my wife, she's my grandmother too

Now if my wife is my grandmother, then I'm her grandchild

And every time I think of it, it nearly drives me wild

'Cause now I have become the strangest 'case you ever saw

As husband of my grandmother, I am my own grandpa

It sounds funny, I know but it really is so

I'm my own grandpa 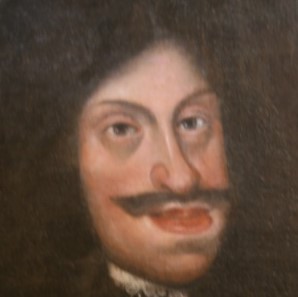 Email ThisBlogThis!Share to TwitterShare to FacebookShare to Pinterest
Labels: I'm my own grandpa 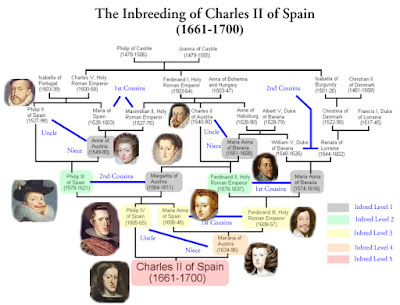 It's been a while since I visited that genealogical house of horrors, the Hapsburg Dynasty, which came to a screaming halt with the birth of King Charles II of Spain. He had so many deformities and came from such hopelessly twisted bloodlines that he was, without doubt, his own Grandpa, if not uncle, nephew, brother, cousin, and (quite possibly) great-aunt.

When I found these gifs, I nearly did cartwheels. They're so beautifully done, and so very creepy! I can't describe all the genetic horrors that left the Hapsburg DNA looking like the hideously twisted metal of a smoking car wreck. But I have noticed before that in their portraits, which are supposed to be flattering, they all look disturbingly alike. And some of them are just plain plug-ugly. These portraits were often used as calling-cards/Instagram photos to cement marriage agreements, in which case the Hapsburgs must have been blind as well as deformed.

I wish I had the talent to do things like this! Go on Michelle Vaughan's site for more.

Emperor Leopold I and Margarita Teresa of Spain; uncle and niece, husband and wife

Maria Anna of Spain and Queen Mariana; mother and daughter

Queen Mariana and Emperor Leopold I; sister and brother

Here is a collection of portraits commissioned by the Habsburg court in Spain and Austria during the 17th century. Diego Velázquez was the primary court painter for King Philip IV (1605-1665); and his apprentices, Juan Carreño de Miranda and Juan Bautista Martínez del Mazo, followed after his death. In Austria, the Holy Roman Emperor, Leopold I, sat for court artists such as Guido Cagnacci, Benjamin Von Block and Jan Thomas. These portraits had many different purposes during this time: to be displayed as powerful symbols; used as political propaganda; or to be given to family members, neighboring courts, and the families of potential spouses.

The Habsburgs often exchanged portraits to arrange their marriages, and many unions were first cousins. This particular family line had extremely high levels of inbreeding – there were two sequential uncle-niece marriages. As a result, their inbreeding coefficient numbers sometimes ranged higher than offspring produced by a brother and sister.

With animated GIFs, we can examine the Habsburgs’ iconography and physiognomy. The Spanish and Austrian royals look so similar that sometimes art historians cannot tell them apart. This series is part of a larger project examining the history, art history and genetics of the Spanish Habsburgs.

Posted by Margaret Gunning at 12:13 AM No comments: