Hilda is something/someone I come back to again and again. I saw her a couple of years ago in one of those sappy internet posts about "America's Forgotten Plus-Size Pin-up Girl!", or words to that effect. I immediately loved the drawings, which were originally calendar art by Duane Bryers. I see her as a sort of antidote to the Playboy bunny/playmate of the '50s and '60s. No sophisticate, she's more of a country girl, usually shown in bucolic settings with farm animals, climbing mountains, straddling fences, bailing out boats, getting herself soaking wet. . . and though her "bikini" sometimes consists of nothing more than a mere string of flowers, she seems at home in her body in a way few women actually are. 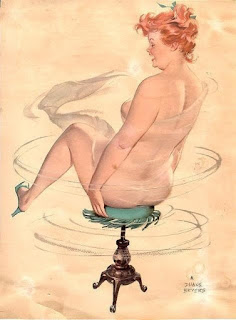 People rhapsodize about her abundance and her curviness, her naturalness and goofy sense of fun, and the way she cares about small animals, birds' nests discovered while she's trying to paint the house, kittens stuck up on telephone poles, etc. She's always falling out of boats and trying to walk along fences and stubbing her toe. Childlike, she seems to have no fear. I'm not sure where the cartoonist got his inspiration, whether she was based on a real person, a composite, or just a wished-for, funny, joyous, life-loving gal (yes, Hilda is definitely a "gal") whose sexuality is so self-evident that it doesn't even need to be spelled out.

It's kind of encouraging, and at the same time kind of depressing to see the internet reaction to Hilda, who became an overnight sensation again after decades of dormancy. See, gals, it's OK to be full-figured! Hilda enjoys herself hugely no matter what she is doing, so maybe WE can, too, so long as we bring our calorie-counter to the banquet and spend five hours at the gym the next day. Hilda is who we might be if we weren't so fucked up. 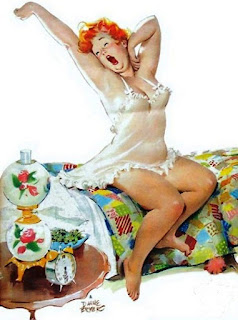 But even if we are, we can still take pleasure in her delightful silliness, the way she spills out of her scanty clothing, and her ecstatic delight in nature and sensual pleasure. She's fun, she knows how to have a good time, and (best of all) she is the Zen-master of a totally-lost art: how to relax. Hilda's someone you'd like to know, if she existed. Some days, like today, like right now, I very much wish she did.

Email ThisBlogThis!Share to TwitterShare to FacebookShare to Pinterest
Labels: Hilda

Did somebody mention ditzy redheads? The return of Hilda

Posted by Margaret Gunning at 6:26 PM No comments:

Since 2009, “Scary Lucy” has terrorized the small village of Celoron, New York, with square teeth and bugged-out eyes that suggest that, were she not captured in 400 pounds of bronze, she would love to pair your brains with her bottle of intoxicating Vitameatavegamin. Now that statue — which is generously considered to be a depiction of comedy legend Lucille Ball — will be replaced with another bronze sculpture, which presumably will not cause nightmares.

EW reports that the new sculpture, by artist Carolyn Palmer, will debut in Celoron, Ball’s hometown, on August 6. Palmer spent months watching I Love Lucy and studying pictures for the bronze piece. “I not only wanted to portray the playful, animated, and spontaneous Lucy,” Palmer explained, “but also the glamorous Hollywood icon.” At that time, the town will retire the “Scary Lucy” sculpture — which its creator, David Poulin, once diplomatically referred to as “by far my most unsettling sculpture.” You can see it below, and then never un-see it. 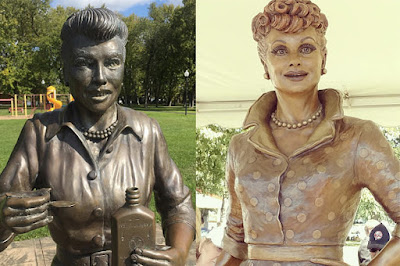 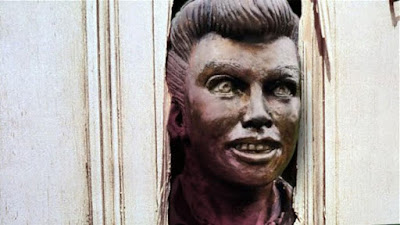 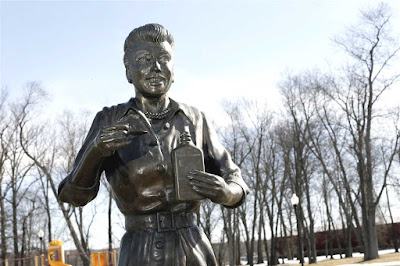 Update, August 6: The new, six-foot-tall bronze sculpture has been unveiled — and it's the vast, vast improvement that the comedy legend deserves. Today would've been Ball's 105th birthday. 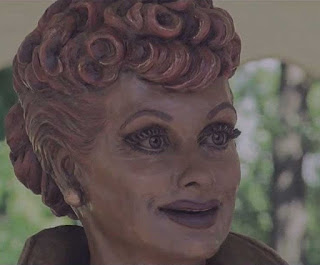 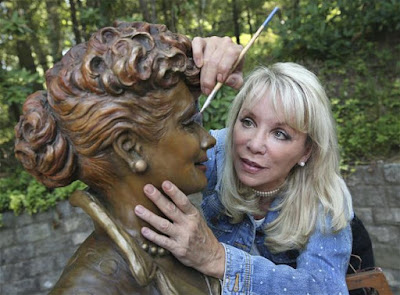 OKAY! It's Monday morning, I have a bit of a headache (though not from what you're thinking - I never touch the stuff), and lo and behold, here's good news. They have finally replaced the horrific statue purported to be Lucille Ball which disgraced her home town for SEVEN years. One can only imagine the deep dismay of the crowd as it was unveiled - or perhaps they christened it by smashing a bottle of Vita-Meata-Vegamin over its head. 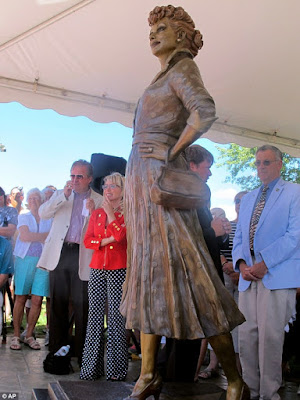 I've been sort of keeping track of this story, because it represents a certain kind of bizarre. It brings to mind another - shall we say - misportrait. A few years back, an old lady who was an amateur painter took it upon herself to "restore" a painting of Jesus called Ecce Homo in a tiny church in Spain. It was peeling badly, and at first she only dabbed paint on the robe, but then. . . 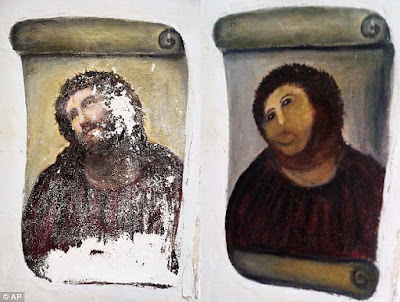 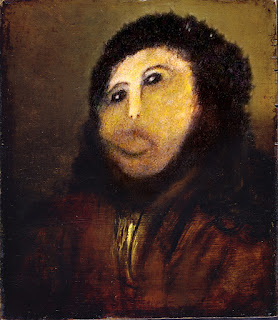 This was either genius (to some people), or disaster.

It looks about as much like Jesus as that first sculpture of Lucy. But then. . . do we really know what Jesus looked like?

Are we certain there WAS a Jesus? Having been a Christian for 15 years, then walked away in total disillusionment, I now believe he was a collection of stories half-based on truth, and the other half, hope. He was wished into being, which is maybe not such a bad thing unless you're expected to believe he literally existed. 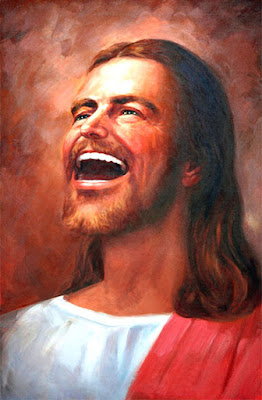 In the United Church, they lowered the ante due to falling attendance, until the Moderator of the church admitted she didn't even believe in God, let alone Jesus. But she was still "spiritual" (though not "religious"). So baking brownies for the UCW was enough to make you a member, so long as you ponied up financially to the point of pain. If you didn't, guilt and accusations that you had no "commitment" would be laid on with a trowel. 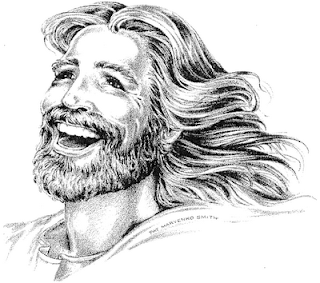 It's enough to make you embrace the new, improved Ecce Homo. Some have called it "Icky Homo", and even worse things. For a while, it brought masses of tourists to the cathedral, a boon for the town. I think the crowds have likely fallen off by now. Fallen off the edge of the world, more like. The key chains, fridge magnets, tote bags, tshirts, water bottles and action figures are now moldering on the shelves, maybe in the bargain corner at the Vatican gift store. 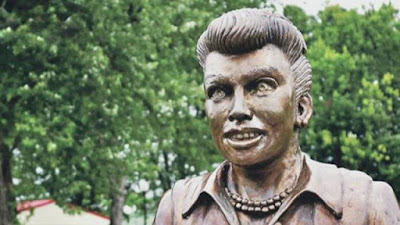 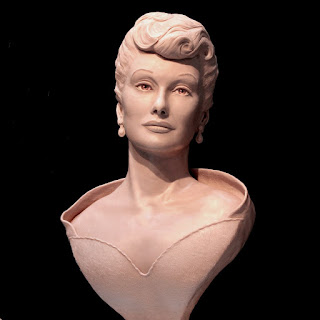 Meantime, we have a new Lucy, and she is a big improvement, but I still don't think they got the face quite right. She had an unusual kind of beauty, and was one of the first glamorous women to do comedy. Phyllis Diller was more the norm. Women had to look hideous to be funny. When Ball first starred in I Love Lucy, she was 40 years old, which by the standards of the day was more like 60. Some years later, she had her first baby (Little Ricky!) - and was actually pregnant on the show. Kind of like the first reality TV. 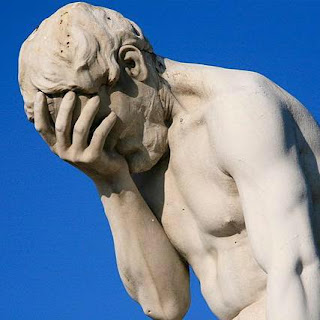 She came back in various guises for years, not always successfully, but like the trooper she was, she kept on working 'til the end.

So the new statue: shall we call it a resurrection? Shall we melt down the bronze from Scary Lucy and make a Donald Trump, offering free rotten tomatoes to the crowd?

Posted by Margaret Gunning at 12:17 PM No comments:

Sound the triumpets: it's William Shatner as Alexander the Great!

This is an unsold TV pilot from 1968. Took me A LONG time to find it on a free movie site. It has elements of greatness, as well as a side of cheese from Shatner's Desilu days. (More about Desilu-related issues in the next post!). The show boasts a strangely eclectic cast, from John Cassevetes (moody dark dramas, mostly) to Joseph Cotten (good journeyman actor meant to add credibility) to none other than Batman himself, Adam West.

The rest is pretty OK, though it's definitely a product of its time. Too bad it didn't make it, as this was the era - between Star Trek and T. J. Hooker, when Shatner was once again a star - that he had to live out of the back of his truck, with only the occasional Loblaws commercial to relieve the drought. But Shatner always had the ability to keep on keeping on, to be a working actor. Nowadays he does anything he wants - including riding horses.

Posted by Margaret Gunning at 10:30 AM No comments: