Posted by Margaret Gunning at 3:49 PM No comments: 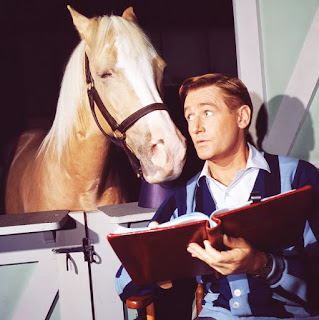 Animal Actor. Mister Ed, a Palomino horse officially named Bamboo Harvester, was a show and parade horse who was foaled in 1949 in El Monte, California. His parents were The Harvester (Sire), a Saddlebred owned by Edna and Jim Fagan; and Zetna, (Dam) who was sired by Antez, an Arabian imported from Poland. Bamboo Harvester was trained by Lester Hilton. Lester "Les" Hilton had been apprenticed under Will Rogers, and also worked with the mules in the "Francis the Talking Mule" movies. Due to old-age ailments, Bamboo Harvester was put to sleep in 1970. The producer of the Mister Ed series never would answer the question of how the horse's lips were made to move. There have been many theories over the years, including the use of peanut butter, but none have been authenticated. (bio by: Ronald Leon) 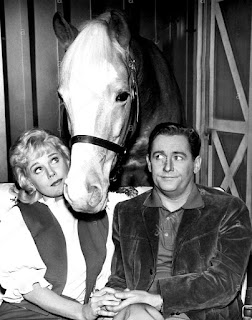 Cause of death: Euthanized

This is a cobbling-together of a post I spent about four hours on this morning. Trying to fix the formatting, which I do for nearly every post, it suddenly disappeared.

ALL of it. It was just a blank.

I mean, no backup. Didn't even go into a recycle bin or anything.

I feel stabbed, ripped off and as if something has been snatched away from me (like four hours that I can never get back).  I don't know, all I can do to salvage this is put up some of the photos and whatever I remember of the text, though there were also three or four videos that were VERY hard to find, not to mention a gif that I can't recover.

Anyway, what I was GOING to say before the finished and polished post was ripped out of my hands, was something like this: as a little girl, I adored Mr. Ed, and I can see why. He was a character actor with a sweet face, and he was also a handsome palomino, a former parade horse, his shiny coat coming across well even in grainy black-and-white. 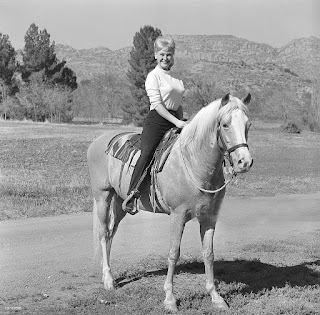 The show we saw on TV wasn't the original. There was a failed pilot starring the same horse, but a different Wilbur. This Wilbur was a clinker, and it didn't fly. But there was something about Ed. Network execs must have decided to give him another try.

(Now that I think of it, black lines kept appearing at the sides. Did that mean something? This version is awful, but I feel I must continue, damn it.)

Oh, what else? I wrote something about My Friend Flicka, a 1950s series which is now posted in its entirety on YouTube. At one point, I would have killed to see even one episode, but now I find I can't stomach Johnny Washbrook and the way he's always crying. He's a fairly good horseman, and the horse is beautiful (of course, of course!). But it was mainly that theme song I loved as a kid. It began with a little harp-stroke which isn't in most of the YouTube vids. It's cut off, probably because most people didn't notice it. But to me, it meant magic was about to begin. This video may or may not have it, because I don't remember which one I posted originally. Took me a while to find it, too.

There were others, National Velvet, Fury. . . Fury was, I have to admit, the best horse actor, and the handsomest of all. In fact, he was simply stunning. But the show involved a lot of shrill whistling and irritating yelling: "Fuuuuuuuuuu-reeeeeeeee!" . And NOWHERE in the YouTube videos does the announcer ever say, "Fury. The story of a horse. . . and the boy who loved him."It's probably something like "Play it again, Sam", a TV myth.

This is from one of those very old-format TV sites set up in about the year 2000:

But the true star of the show was Fury himself. Known as Highland Dale when he lived on a farm in Missouri, he was 18 months old when he was discovered by well-known movie horse trainer Ralph McCutcheon who first used him in “Return of Wildfire” in ‘48. Series producer Leon Fromkess hired McCutcheon to deliver a horse for the series. By this time, McCutcheon had changed the horse’s name to Beauty (often called Beaut) and had worked him in “Lone Star” (‘52), “Johnny Guitar” (‘54) and “Gypsy Colt” (‘54). He was cast as the black stallion in “Giant” (‘56); and several other shows after “Fury” ended.

Can't find where I got this info, but Highland Dale was an American Saddlebred, long and rangy compared to the rather dinky Ed. Flicka was somewhere in the middle. William Shatner breeds Saddlebreds. Lesson for the day. 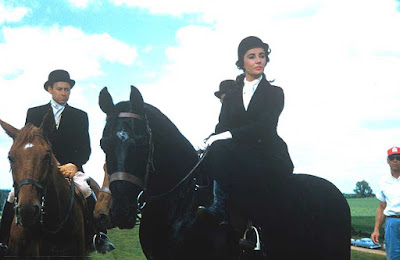 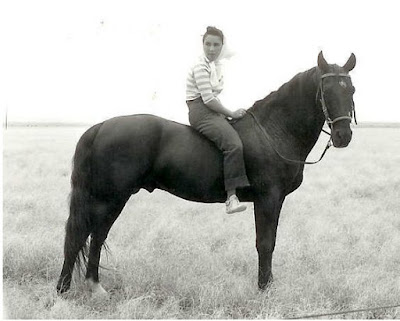 Elizabeth Taylor on Highland Dale/Fury was a sight to behold. His size can be gauged by how tiny she looks on him, almost like a girl. She was a magnificent horsewoman who did not need a double, not even in National Velvet when she was 13. I've tried to make a gif of my favorite scene from Giant, very poorly cropped for some reason (to avoid a letterbox effect, no doubt).

And that's all I can salvage of this post. I'm sorry, but I'll bet I feel a whole lot worse about it than you do.