Early cereal ads on TV had no idea how to pronounce the word protein.

It always came out "PROTE-ee-an", or something like it.  I don't think people knew or cared much about nutrition then, though the ads always claimed the cereal caused children to grow to almost supernatural heights.

I knew "protean" had something to do with Proteus, a character from Greek mythology, but couldn't remember anything about him. So had to look it up.

any of a genus (Proteus) of aerobic usually motile enterobacteria that include saprophytes in decaying organic matter and a common causative agent (P. mirabilis) of urinary tract infections

Protean is not to be confused with protein (a member of a large group of chemicals necessary to and found in all living things).﻿

But I also found this astonishing fact:

PROTEUS An elderly Sea-God who was the son and seal-herder of Poseidon.

How can the son of someone be elderly? This is full of mystery, and I don't feel like exploring it because it has nothing to do with Kellogg's OK, an obsolete cereal of the '60s. I did try very hard to find a picture of Proteus, and all I could find was Poseidon. All right, they didn't make any cruise ship disaster movies about Proteus, but I SHOULD be able to find a picture of him!

And how in God's name do you herd seals?

This is, supposedly, Proteus, though he does not appear to be herding seals. In fact, maybe the thing with the tail is Proteus! And he certainly isn't elderly, but who is elderly all their lives? 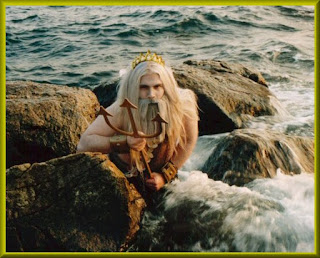 And, even better, I found this picture of Poseidon. So Otis isn't the only one who likes to dress up funny.