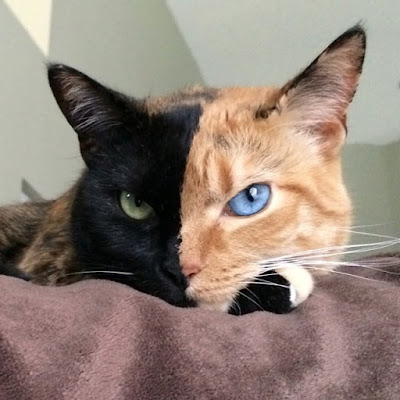 The following excerpts come from a several-years-old article in National Geographic (link to article below).

So it MUST be true! Since when did National Geographic ever steer us wrong?

In any case, I almost don't care if Venus is really Venus - really looks like that, I mean. The photos are so breathtaking that the illusion (if it IS an illusion) is almost enough. And in any case, she's obviously an illusion that moves, meaning there's no photoshopping going on.

Meantime, there's a Facebook page called Venus the Two Face Cat, which to me sounds a little ungrammatical, as if someone was loudly chewing gum when they set it up. But it's fairly up to date, unlike a lot of these things that are abandoned after the initial enthusiasm dies down.

My first reaction to seeing a photo of Venus was "no way". Then I looked her up on Snopes, and by God, they said "true"! And would Snopes ever steer us wrong? 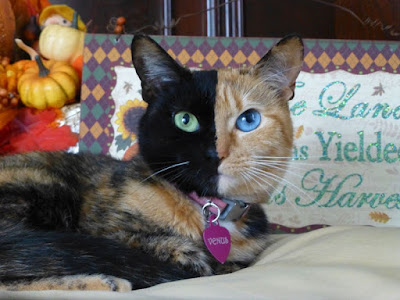 
Venus the Two-Faced Cat a Mystery

Famous feline may have different DNA on each side of her body.


By Katia Andreassi, National Geographic News
Venus the two-faced cat is currently the most famous feline on the planet.

The three-year-old tortoiseshell has her own Facebook page and a YouTube video that's been viewed over a million times, and appeared on the Today Show last week. (Watch National Geographic cat videos.)

One look at this cat and you can understand why: One half is solid black with a green eye—the other half has typical orange tabby stripes and a blue eye.

How does a cat end up looking like that? Leslie Lyons, a professor at the University of California, Davis, who studies the genetics of domestic cats said she's never seen a cat exactly like Venus.

"She is extremely, extremely rare," Lyons said. "But you can explain it and you can understand it."

Many reports about Venus refer to the cat as a "chimera." In mythology, a chimera is a mishmash monster made up of parts of different animals. A feline chimera is a cat whose cells contain two types of DNA, caused when two embryos fuse together.

Among cats, "chimeras are really not all that rare," Lyons said. In fact, most male tortoiseshell cats are chimeras. The distinctively mottled orange and black coat is a sign that the cat has an extra X chromosome.

But female cats, said Lyons, already have two X chromosomes so they can sport that coat without the extra X. That means Venus is not necessarily a chimera.

To find out would require genetic testing, said Lyons. With samples of skin from each side of the cat, "we can do a DNA fingerprint—just like on CSI—and the DNA from one side of the body should be different than the other."

If Venus isn't actually a chimera, then what would explain her amazing face? 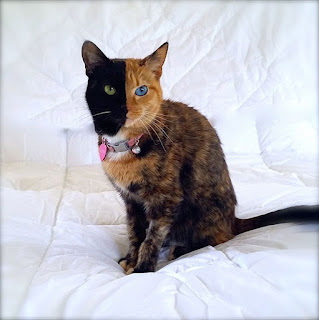 "Absolute luck," Lyons said. One theory: perhaps the black coloration was randomly activated in all the cells on one side of her face, while the orange coloration was activated on the other, and the two patches met at the midline of her body as she developed.

Cat fanciers who are transfixed by Venus's split face may be missing the real story: her single blue eye. Cat eyes are typically green or yellow, not blue. (Take a cat quiz.)

A blue-eyed cat is typically a Siamese or else a cat with "a lot of white on them," she explained.

Venus appears to have only a white patch on her chest, which to Lyons is not enough to explain the blue eye.

Posted by Margaret Gunning at 10:54 AM No comments: