Dispose of your ugly ideas here 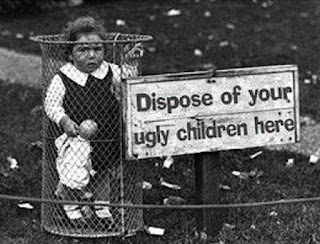 In spite of its satiric and sometimes humorous tone, this blog occasionally slips into the misanthropic. Meaning, "I hate humanity", or at least the jaw-dropping stupidity inspired or revealed by the internet.

This is an example. This photo, obviously a very old one, is doing the rounds right now. It's the sort of thing that draws hundreds, even THOUSANDS of comments from people, and many of them are indignant. "How could anyone say that about an innocent child?" "All children are beautiful!" "It should be against the law to say such things!" etc. etc. etc.

Somebody said "hey, that lettering looks sort of fake", but no one listened. The person was quickly shouted down. What's the matter with you, anyway? Don't you know how to join in on a massacre?

Non-lemmings are rare, as are people who say, "Wait a minute." This was a big wait-a-minute moment for ME, which makes me realize why I'm so often shouted down - no, change that to "ignored".

For it turns out (I had to check this with Snopes, but I was pretty sure of it before I checked) that the photo had indeed been doctored, and poorly at that, the sign photoshopped with lettering that looked far too uniform and modern to be original.

Here is the original photo: 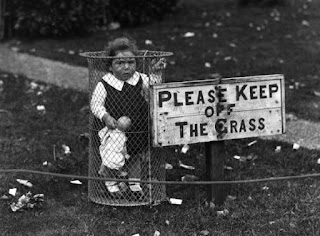 The joke? (For yes, there is a joke/point!) It isn't "I hate children", "children are ugly", "let's put our children in the garbage", "'isn't it horrible that people want to put their children in the garbage", "what's wrong with people anyway?", "call Child Protection Services", "Call 9-1-1","Call the police", "I'd like to take that sweet little girl home with me right now and just love her to pieces" (never mind that the picture was taken in 1931 and she long ago died of old age), etc. etc. etc.

But most people won't admit (or even notice) that they've been bamboozled and fell right into it, causing them to rant and rage that NO CHILD is ever ugly (!!), and that even the ugly ones are beautiful in their own way, just like in the song (though I used to wonder how that applied to Hitler). They will have moved on to the next whatever, bluh.

Do I sound misanthropic today? Perhaps I am. Does the internet bring out the worst in people? I sometimes think it brings out the dumbest. The dumbest of the dumb.

One of the things I tried hard to instill in my children was the imperative to think for yourself. Make up your own mind. Evaluate. Strain out the bullshit. I don't mean constant cynicism. I mean discernment, and there isn't a whole hell of a lot of discernment in internet culture. It's all very well to say, "oh well, it was always like that". That still doesn't make it intelligent, moral, right.

Morality is a crusty old thing now, and is always (and negatively) associated with sex. It has nothing to do with conscience and one's deepest, most cherished values and beliefs. It's simply out of date. If some world leader displays an act of personal integrity in the face of moral disintegration or indifference, everyone gasps because it's just so gosh-darned different.

Values are something you find at Walmart.

I can't do much about this, in fact I can't do ANYTHING about this, and if I even write about it I'm accused of being "negative" or a party-pooper. It's just that I'd like to see a little depth, a little substance, without having to go back 100 years or so to find something of value.

But I'm not making this happen, I'm not fixing it, I'm not changing the way things are. So I should shut up! That's the message I get. For God's sake, if you can't say something nice, don't say anything at all! It scares me to realize how many people actually believe in that.

The prevailing view should prevail. Right? The majority should rule. Right? This is a democracy, so whatever people are saying most often, must make the most sense.

When Trump gets in, I can predict a certain reaction: a flood of protest at first, and then, once the panic dies down and hopelessness sets in, a certain turning of the tide, an "if we can't beat him, join him" attitude. A "let's make the best of this". And, finally, "hey, maybe the guy's not so bad after all."

Comparisons of Trump to Hitler are tired and inaccurate, but they're also useful. I believe that the majority of human beings are followers and want to be told what to do. In times of desperation, they'll follow just about anything, the way baby ducks follow a tractor.

Maybe it's just too unbearable to do anything else.

So what does all this have to do with a picture of a little girl in a garbage can? Figure it out yourself, I'm just too tired to explain it.

Posted by Margaret Gunning at 2:23 PM No comments: