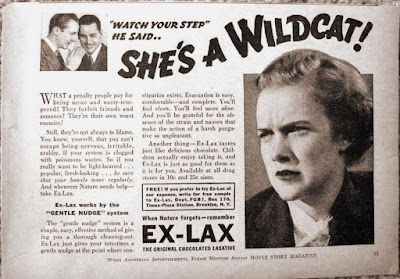 What a penalty people pay for being mean and nasty-tempered! They forfeit friends and romance! They're their own worst enemies!

Still, they're not always to blame. You know, yourself, that you can't escape being nervous, irritable, crabby, if your system is clogged with poisonous wastes. So if you really want to be light-hearted. . . popular, fresh-looking. . . be sure that your bowels move regularly. And whenever Nature needs help - take Ex-Lax.

The "gentle nudge" system is a simple, easy, effective method of giving you a thorough cleaning-out. Ex-Lax just gives your intestines a gentle nudge at the point where constipation exists. Evacuation is easy, comfortable - and complete. You'll feel clean. You'll feel more alive. And you'll be grateful for the absence of the strain and nausea that make the action of a harsh purgative so unpleasant.

Another thing - Ex-Lax tastes just like delicious chocolate. Children actually enjoy taking it, and Ex-Lax is just as good for them as it is for you. Available at all drug stores in 10-cent and 25-cent sizes.

Posted by Margaret Gunning at 4:18 PM No comments:

The Kojak paper doll and other '60s artifacts 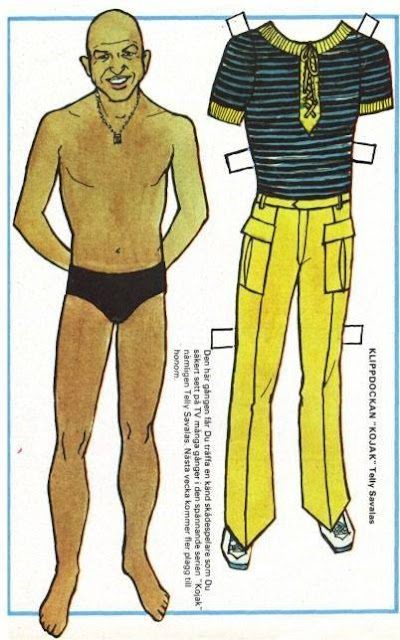 Seldom do I find something this exquisite on the internet. A Telly Savalas paper doll! I especially love the yellow cargo pants (he was ahead of his time) and the striped shirt with the "whatever" at the front. At first I thought it was a tie, but I think not. It's one of those lace-up things. 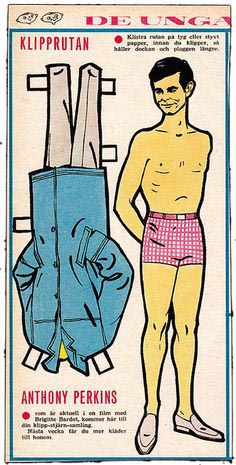 This, of course, got me on a Thing. Celebrity paper dolls, but boy dolls. I remembered this bashful Tony Perkins pose with the pink polka-dot briefs and the upside-down turquoise trench coat. The text on these is in some sort of foreign language, Swedish I think, so I won't try to translate. 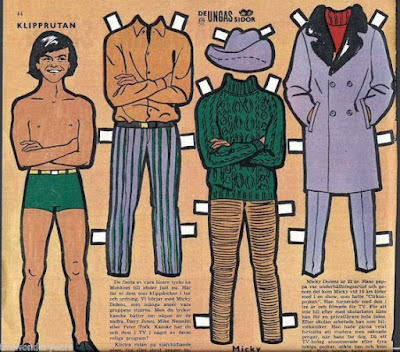 Though the name is cut off at the bottom (and crappy cropping is one of the things I hate MOST about Pinterest), this is Micky Dolenz of The Monkees. Really, he's nicely turned-out here, though I do wonder at the difficulty of snipping out all those little tabs. As I recall from girlhood, when I used to try to actually do these things, the scissors would always slip, causing almost all the tabs to be sliced off. Then you had to sort of tape the clothes on, defeating the purpose of the thing. 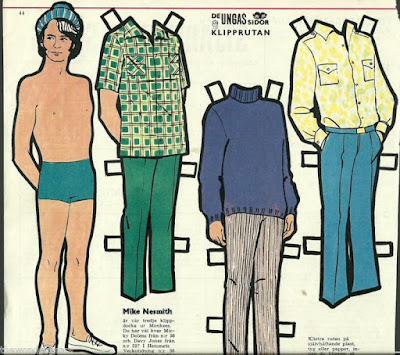 Here you can play with your Monkee all you want. Mike Nesmith being the coolest. 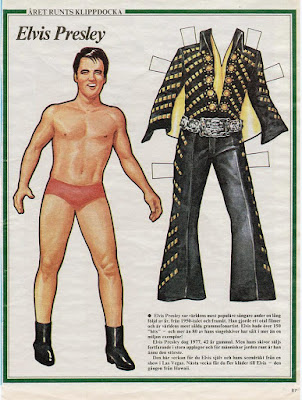 This is kind of a nice Elvis layout. Too many tabs by half, however. In some cases you were supposed to glue the paper onto stiff cardboard, let it dry, and THEN cut it out. Maybe then it could stand alone? Prince Charles! I didn't know he existed as a paper doll. (Can Prince Harry be far behind?) Note that you put one set of clothes on top of the other. I guess they believed having a Prince in his gotchies would be a bit unsuitable. 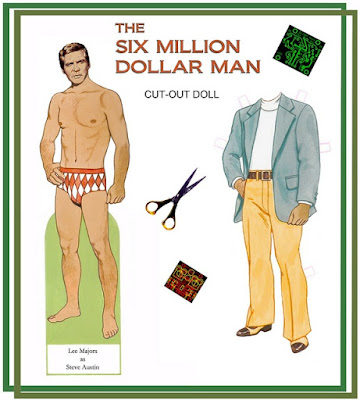 There's something a bit dodgy about this Steve Austin doll. The head definitely does not belong to the body. I think this is probably a generic doll with interchangeable heads. It would help if they could get the size right. 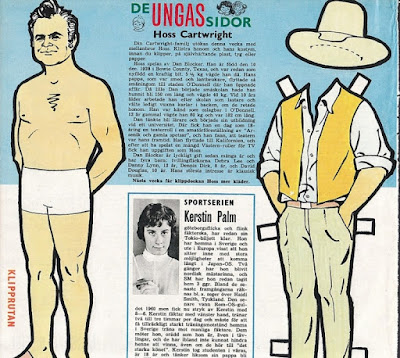 My personal favorite: the Hoss Cartwright paper doll, complete with ten-gallon hat, though I don't see his Colt 45 anywhere. But the more I think about it - Dan Blocker in his underwear - uh - um - gghhgh - excuse me.

Posted by Margaret Gunning at 4:07 PM No comments:

Posted by Margaret Gunning at 12:44 AM No comments: