Posted by Margaret Gunning at 11:57 PM No comments:

That's it. Click on those big pink letters at the top! Because if you DO, you'll be able to hear something I can't describe to anybody. Something I've been trying to find out about since some time in the late 1950s. A . . . ding.

That's all it is. But it's a ding I often heard. A ding that happened during those TV station breaks, those top-of-the-hour things between shows, except I don't know what network it was. I don't think it was connected to that weird CBS aperture/eye or the NBC chimes or any of that. ABC? Who knows. A local station, something in Detroit? WJBK, perhaps?

But this is the ding. I recognized it at once and was amazed, because it proved to me I WASN'T crazy after all, though people had been looking at me that way for decades whenever I brought it up (maybe twice in 50 years). When I first stumbled on TV Party many, many moons ago, it was the first video site I ever found and seemed magical. I watched half-minute snippets of old TV shows, things I hadn't seen since I was ten, and wept as if I had found the Holy Grail. That was before YouTube came along and wiped the whole thing off the map.

But! This site, this TV Party which is now known as Classic TV because somebody else (TWO somebody elses, in fact) stole their name, still has this weird, almost eerie "ding" sound when you first go on the page. It's an opening salvo, or a greeting, or something like that. It's an old sound, probably a '50s sound from when I was really little and didn't understand anything, and nobody would explain it to me. So it got stored in the back of my brain along with a thousand other bits of broken information.

The ding was never entirely forgotten. Though it lasts about a tenth of a second, somebody was able to find the ding on some tape somewhere and reproduce it, so that each time you go on the Classic TV site, you get the ding. 90% of people, even boomers like me, won't know what the hell they're listening to. I didn't either, until I got that creeping, squicked-out, time machine feeling I get when the 1950s come back to me, and once again I sit in the middle of the living room floor with my fat little legs splayed out in front of me. Three years old, and trying to figure out Ernie Kovacs.

Posted by Margaret Gunning at 10:47 PM No comments:

Email ThisBlogThis!Share to TwitterShare to FacebookShare to Pinterest
Labels: Ding!

An exploration of the paranormal

I pared these down. No, really. There were about fifteen of them originally. I just couldn't stop.

There are three bears, of course. And you don't want to know these bears. They come swarming into your living room and cover your TV screen. They look like Ewoks, or, worse, something from the TV-movie version of Communion (remember Christopher Walken's dance?) or Close Encounters of the Third Kind.

My gifs have been slow and jerky lately. These are shorter ones, so I hope they do better.  For some reason the animation in this just begged to be giffed. It's the creepiness of those bears with their jerky puppetry and cold, sociopathic eyes.

The reactions of little Janie and Johnny are almost as squick-inducing as the jerky ministrations of the Sugar Crisp Bears. Note the segue here: girl eats cereal; bear figure with pitcher appears for a nanosection in the right side of the frame, looking - if you pay attention - incredibly artificial; then the bear and the pitcher and Little Janie's bowl are shown in a different shot, so that they never all have to appear together. This saves having to combine live action with animation. The continuity here sucks. It took me a long time to figure out that this is supposed to be the same bowl/bear.

Bear talking. Creepy. Its fur seems to creep and crawl, indicating that it has fleas, or perhaps has been moved around by somebody's greasy fingers as they take each picture and string them together.

It's that jittering, that nervous, diddery thing that makes them so unsettling. They almost seem to be on the wrong speed. That, and the big staring eyes.

"Faster, kids. . . eat FASTER!" That weird sparkly thing is a big chunk of sugar with paranormal powers which bends these children to the bear's evil will. These ads often bragged about how you could (and should) eat Sugar Crisp "like candy". This seems horrible until you realize that Sugar Crisp probably had a fraction of the sugar content of Lucky Charms or Obese-berry or whatever-the-hell they have today.

Like I said. I boiled these down. I could have gone on forever. This is the sort of animation where you can repeat one frame. I don't know if this was stop motion or what, but it's motion that I wish would stop.

Posted by Margaret Gunning at 4:30 PM No comments:

Posted by Margaret Gunning at 9:57 AM No comments: 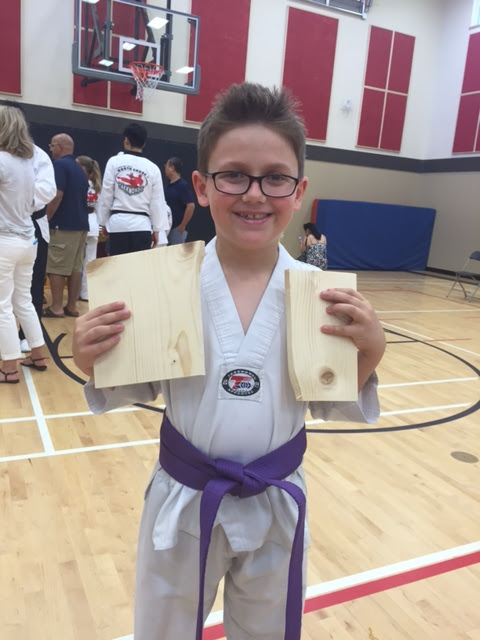 Posted by Margaret Gunning at 9:56 AM No comments:

The Taekwondo Kid: the colour purple!