While a Chesterfield burns

Tell me, folks. Are your gifs running a little slow and jerky? Mine are too, sort of, which is some sort of indication I'm not supposed to be posting 15 or 20 of them a day. Some are huge files, too, and I can't predict when that's going to happen. I'm at the mercy of Giphy, Makeagif and a new one called Facegarage (don't ask, but it made all those evangelical weight loss ones, so it's OK) and their individual peccadilloes. It's been my experience that gif programs are designed to break down sooner or later, especially the better ones. (Can you say Gifsforum?)

Speaking of peccadilloes. The image of a well-coiffed woman blowing out a langorous lungful of ignited tobacco leaves was once considered not only classy and elegant, but sexy. Coughing your lungs out in a pulmonary ward isn't. But who knew? So long as there was a smile in your smoking.

At a certain point in the 1950s, health statistics began to come out that alarmed the big tobacco guys, so they rushed out ads that made their product seem safer. Figures were bandied about. "Recessed" filters made your smoke "cooler", "less irritating to the throat". Percentages, quarter-inches, mentions of tar and nicotene were reassuring to customers because, obviously, this little filter thingie here, this RECESSED filter, would take all the danger out of smoking. One ad even went so far as to say, "I want a treat, not a treatment". The guy would probably go on to get many treatments before the end.

Eventually, the real statistics leaked out: filters, low-tar-and-nicotene tobacco blends, and all that horseshit made not one bit of difference. Smoking cigarettes could be lethal, and there seemed to be no safe level. No one talks about smoking one or two cigarettes a day any more, because the assumption is that everyone is heavily addicted and blows through a pack or two a day.

And we won't get into the cost. I don't know how anyone can afford to smoke these days, but people buy tobacco before they buy food, so I guess it must be, uh, er, kind of addictive after all. The packages all have horrific warnings all over them, and photos of rotten lungs and people smoking through holes in their throats. I guess it happens.

Posted by Margaret Gunning at 10:39 PM No comments: 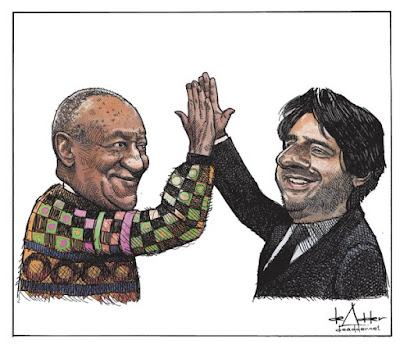 (From today's Globe and Mail) Editor’s note: This is a statement delivered by Kathryn Borel, whose allegations against former CBC radio host Jian Ghomeshi were settled by peace bond on Wednesday. Mr. Ghomeshi admitted no criminal wrongdoing, but apologized to Ms. Borel in the course of the proceedings. He will no longer face trial. Mr. Ghomeshi was previously found not guilty of sex-assault charges in a separate case involving three women, four counts of sexual assault and one of overcoming resistance by choking.

Hi everyone. Thank you for coming out and listening. My name is Kathryn Borel. In December of 2014, I pressed sexual assault charges against Jian Ghomeshi. As you know, Mr. Ghomeshi initially denied all the charges that were brought against him. But today, as you just heard, Jian Ghomeshi admitted wrongdoing and apologized to me.

It’s unfortunate, but maybe not surprising, that he chose not to say much about what exactly he was apologizing for. I’m going to provide those details for you now.

Every day, over the course of a three-year period, Mr. Ghomeshi made it clear to me that he could do what he wanted to me and my body. He made it clear that he could humiliate me repeatedly and walk away with impunity. There are at least three documented incidents of physical touching. This includes the one charge he just apologized for, when he came up behind me while I was standing near my desk, put his hands on my hips, and rammed his pelvis against my backside over and over, simulating sexual intercourse. Throughout the time that I worked with him, he framed his actions with near daily verbal assaults and emotional manipulations. These inferences felt like threats, or declarations like I deserved to have happening to me what was happening to me. It became very difficult for me to trust what I was feeling. 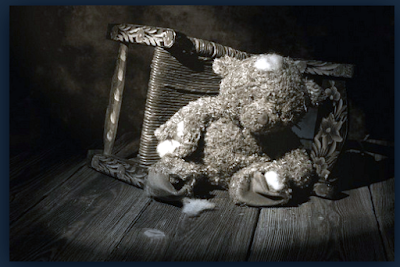 Up until recently, I didn’t even internalize that what he was doing to my body was sexual assault. Because when I went to the CBC for help, what I received in return was a directive that yes, he could do this, and yes, it was my job to let him. The relentless message to me, from my celebrity boss and the national institution we worked for, were that his whims were more important than my humanity or my dignity. So I came to accept this. I came to believe that it was his right. But when I spoke to the police at the end of 2014, and detailed my experiences with Mr. Ghomeshi, they confirmed to me what he did to me was, in fact, sexual assault. 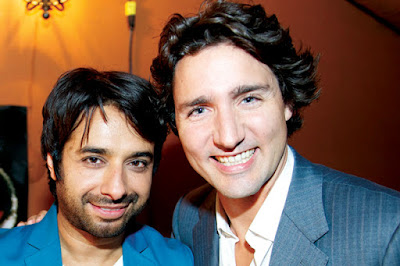 And that’s what Jian Ghomeshi just apologized for: the crime of sexual assault. This is the story of a man who had immense power over me and my livelihood, admitting that he chronically abused his power and violated me in ways that violate the law. Mr. Ghomeshi’s constant workplace abuse of me and my many colleagues and friends has since been corroborated by multiple sources, a CBC Fifth Estate documentary, and a third-party investigation. 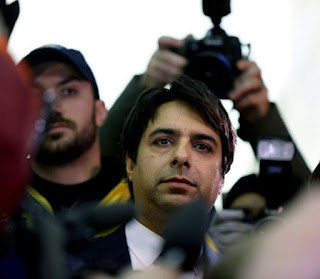 In a perfect world, people who commit sexual assaults would be convicted for their crimes. Jian Ghomeshi is guilty of having done the things that I’ve outlined today. So when it was presented to me that the defence would be offering us an apology, I was prepared to forego the trial. It seemed like the clearest path to the truth. A trial would have maintained his lie, the lie that he was not guilty, and it would have further subjected me to the very same pattern of abuse that I’m currently trying to stop.

Jian Ghomeshi has apologized, but only to me. There are 20 other women who have come forward to the media and made serious allegations about his violent behaviour. Women who have come forward to say that he punched, and choked, and smothered and silenced them. There is no way that I would have come forward if it weren’t for their courage. And yet Mr. Ghomeshi hasn’t met any of their allegations head on, as he vowed to do in his Facebook post of 2014. He hasn’t taken the stand on any charge. All he has said about his other accusers is that they’re all lying and that he’s not guilty. And remember: that’s what he said about me.

I think we all want this to be over. But it won’t be until he admits to everything that he’s done. Thank you. 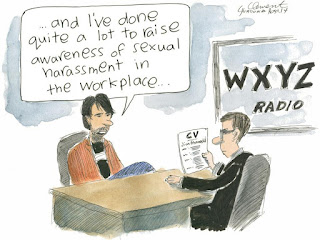 Posted by Margaret Gunning at 1:36 PM No comments: