Behold! His Mighty Hand. Or something. I feel as if I'm in one of those Cecil B. DeMille epics where Moses discovers the burning bush and takes off his sandals and falls on his face.

For this is The Ultimate Car. 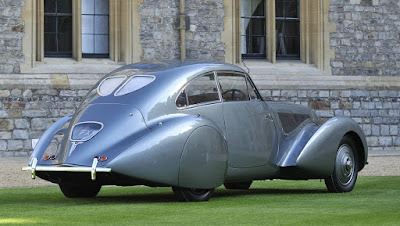 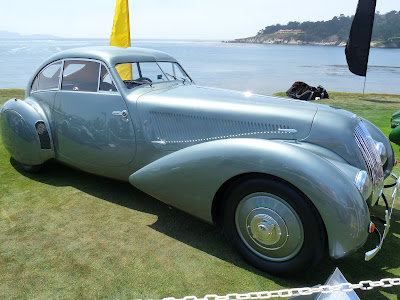 This is less a car than something alive. Something with animus, with soul. 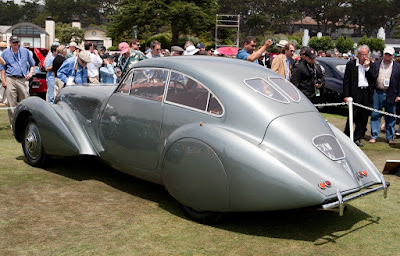 I don't know who Embiricos was, and I don't care much (except I feel a bit guilty and negligent not researching him for this post). Some race car driver, or someone who could afford to have a whole car designed after him - like Edsel, except this one was GOOD. The Embiricos appears to have been manufactured for several years, from about 1936 to 1939, but I can't see much difference in it from year to year. It just goes from exotically gorgeous to exotically gorgeous. 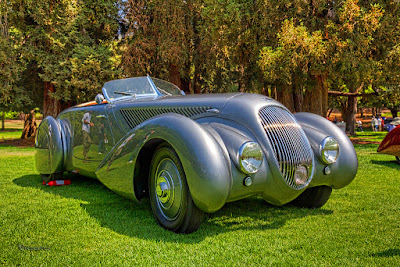 It's funny, because to me it has more of the look of a '40s car, with all those pregnant-looking bulges. But at the same time there is the pointiness, even angularity, and a raciness that implies gazelle-like speed. You could take this thing out on the track back in 1939 and beat the hell out of all those pathetic Bugattis and whatever-else-was-around. 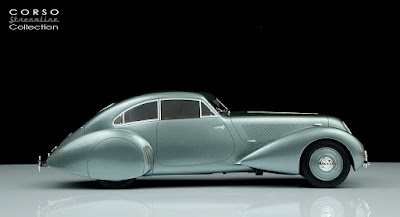 I think it's obvious by now that I know nothing whatsoever about vintage cars. But I know what I like. I have the most embarrassing reaction to them. I want to sit on the roof of this thing, facing its rear bumper, and just sli-i-i-i-i-i-de on down. 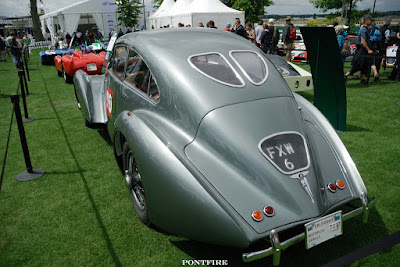 There is a name for this fetish-y thing I'm talking about. Can't remember it, but there was a whole TV series about it, My Amazing Whackadoodle Addiction or Compulsion or something. A woman was going to marry the Eiffel Tower, for example, but I guess he said no. Another woman wanted to marry a carnival ride (which didn't work, by the way - I didn't get that one at all, for if a ride doesn't work, how would you get off?) 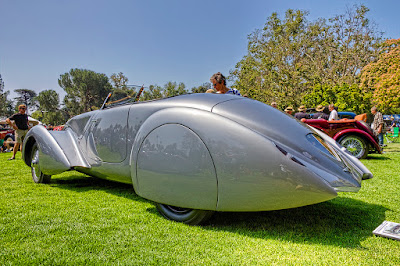 I don't really want to marry cars like this one. I want to have lustiferous affairs with them, ride around inside them to the creak of leather and the woah-woah-woah-woah-woah hummy sound of an old-fashioned car engine. I've heard that riding in these things is sort of like being in a Sherman tank (not that I've ever been in one of THOSE either), in that they seem simply huge inside and out. 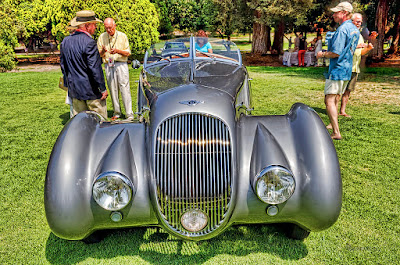 Every year, Bill and I go to a local car show which is made up of about 85% vintage: cars older than 40 years. The oldest of these, a Ford predating the Model T, had a crank. The one I first had a real Jones for was a little red Corvette (do they come in any other colour?) that I wanted to slip into my pocket. But in the last few years, the '40s models, wide and swaggering, chugging along like mighty seagoing vessels, have done it for me.

And yet, look at this one! It predates them all. And from every angle, it looks like a different car. It even looks downright modern from the side. This front view looks very race-car-ish - as a matter of fact, it's downright futuristic, like the Batmobile or Supercar. It looks as if it could easily take off and fly, its rear jets blazing.

But the sleekness from the side. . . oh God. Gulp. I want to lick it, to swallow it. It's just that kind of car. You could put it on a stick in the summer and consume it. 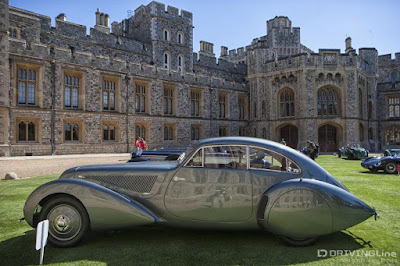 I'd sing to it. Wrap it up in a blanket at night (one-o-those tarp thingies).

I'd wish upon it, instead of a star.

I'd knock on it, instead of wood.

Posted by Margaret Gunning at 5:14 PM No comments: