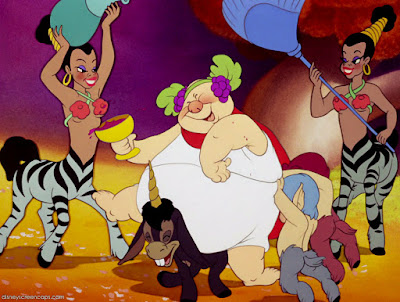 Disney's Fantasia is one of those highbrow thingammies that you're supposed to appreciate because it's Culture.

It's high culture that is Good For You, like some kind of medicine you have to swallow for your own elevation.

It was meant to give children a clinical dose of classical music with all sorts of fun cartoons to watch while they suffered through it. They got Beethoven. They got Tchaikovsky. They got Moussorg-whatever-his-name-was, the big guy on the mountain.

I don't think a child ever liked Fantasia, and certainly no child ever loved it. Most adults were likely kind of bored with it too, but trundled the family off to see it anyway as a sort of educational duty.

Fantasia bores ME to death, and I have never even seen it. I fell in the generational cracks between the movie's release in 1940, and the tepid bits that appeared on TV on Walt Disney's Wonderful World of Color (which, of course, we watched in black and white). I don't think I saw more than five minutes of it at a time.

But speaking of black and white! 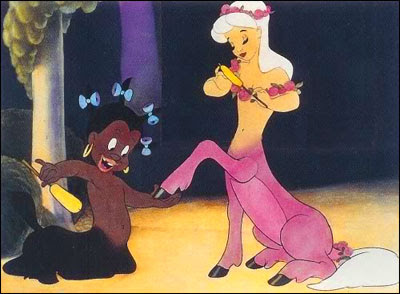 I never knew there was anything disturbing in Fantasia except its length, its pomposity, and those dinosaurs killing each other to Stravinsky's Rite of Spring. Now I know. There was a little black girl in there who was excised. I mean, cut out. Cut RIGHT out. Cut out because her very presence was seen to be offensive.

But that aside: there was, in Fantasia, in the Beethoven's Pastoral Symphony section with all the centaurs and cherubs and Dionysian types capering around, a small character named Sunflower. Sunflower existed, then she didn't. She made one appearance on TV which I don't remember (for surely Fantasia was never shown in its entirety on TV). But when the movie was theatrically re-released in the late 1960s, all trace of Sunflower had been removed.

It was as if the little black centaurette had never existed.

This is a solution, is it not? Getting rid of something that is a problem. But it has disturbing echoes of The Final Solution, in that it says "hey, listen, folks, WE never displayed racist attitudes in our cartoons!" Nobody here but us white folks.

Here is an analysis of the whole mess from a film site (so I don't have to explain it any further - I'm lazy today):

Sunflower is a centaurette (female centaur) who is depicted as being a hybrid of a young black girl and a donkey. She is shown performing duties as a servant to the other centaurettes who are depicted in a wide variety of pastel colors.

Beginning in the 1960s, Sunflower was deemed a racist and negative depiction of black people, and her scenes in the film were deleted. Beginning in 1990, the scenes were restored, but the shots she was in were cropped so that she could not be seen. 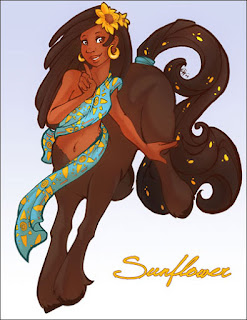 There is much debate over whether she should've been removed from the film. There are those who say that she should be censored in order to move away from the attitude of depicting black people as negative stereotypes. Others say that she shouldn't be censored because such portrayals were very common in animated films of the time, and that removing them is the same as saying that they never existed in the first place. Some believe that there should be a middle ground; in other words, for example, the late film critic Roger Ebert felt that the original should be preserved for historical purposes, but that the censored version should be the one made available for mainstream consumers, in particular children. 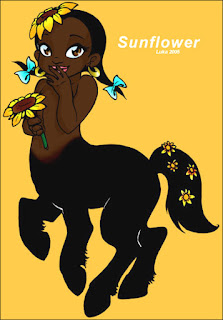 
Also of note: There are other black characters in the segment. There are two identical unnamed centaurettes who are part young black women and part zebra and another young black girl centaurette named Otika who in the original rolls out a red carpet; in all versions currently available, Otika is digitally removed so that the red carpet appears to unroll by itself, and the zebra centaurettes have never been altered or removed from the film.

(Note. I don't remember seeing those zebra-ettes before, but did I look? I see them now, and they're gorgeous, though I still notice echoes of servitude in their actions because they're waiting on that fat drunk guy.)

But you can't do that if somebody just took an eraser to you and made you disappear.

We never let Sunflower have a chance.  She was cute, but a little disturbing, like Buckwheat in The Little Rascals. The thing is, The Little Rascals was ahead of its time: it depicted white and black kids all rolling around in the dust together, which no one else was doing. And Stymie, the solemn one with the bowler hat, was just the coolest character ever - I liked him way better than any of the white kids.

I find it interesting, though. First there is a Sunflower. Then there is no Sunflower. Then there is. Hello, folks. I'm back. I have my existence again, and I am here to tell you that THIS is the way it was in the 1940s, back when people were frankly racist and didn't try to dissemble. If you're not happy about it, you can try to get rid of me, but somehow or other, who knows when, I'll be back to haunt your conscience/consciousness again. 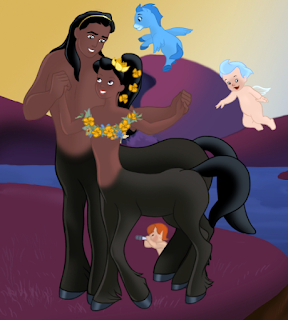 POST-BLOG I-DIDN'T-SEE-THAT-BEFORE: Of course, if the animators were kind of uncertain about Sunflower's presence, it's likely they would start making errors, or at least be inconsistent about her appearance. If you watch the tiny clips which I giffed (since they were only a few seconds long in total), you'll note that there's a sunflower in her hair in SOME scenes, but by no means all. Sometimes it's just not there, only those little rags her hair is tied up in (and not even those, in some places). These scenes weren't meant to take place on different days or even different hours or minutes. So what happens to the sunflower? Why can't the animators get it together on how her hair is supposed to look? They wouldn't do that to Snow White, would they? 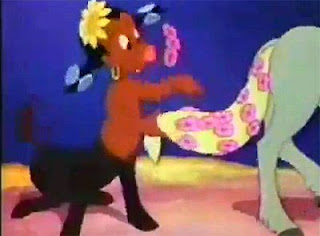 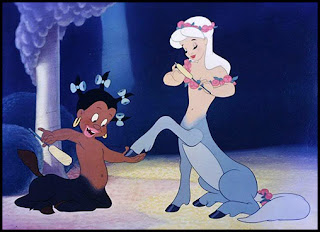 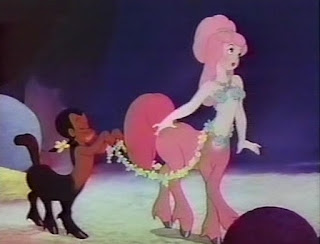 APOLOGIA. For my habit of not always giving credit for certain kinds of artwork, I'm making amends here and now.

deviantart.com is a fantastic site. I'm envious every time I look at it, because I can't make representative art to save my mortal soul. I might as well use a sharp stick and a little pile of dog shit, for all the results I get. But these Deviant Artists are superb, soaring in their talent and imagination. They display their art in a kind of vast internet gallery that gives the public a chance to admire and enjoy it, but in no way, shape or form can I claim it as mine.

So I've posted links to their pages on each of these superbilicious renderings of Sunflower, a Disney character reimagined not as a subservient, minority, or erased character, but as a gorgeous and powerful exotic her own right, a mythic creature whose beauty puts those pastel pink-and-blue horsettes to shame.

Addenda to the addenda . Though I love those gorgeous uncredited zebra centaurettes in Fantasia, I'm not keen on the fat, lolling, drunken Dionysus figure that goes with them. So here are a nice couple of crops. 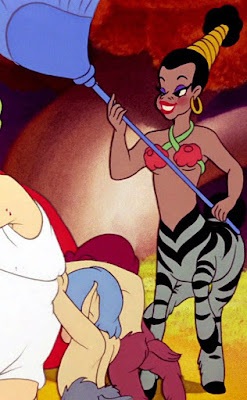 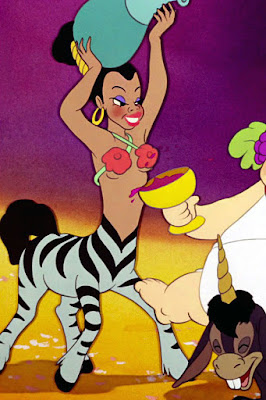 Posted by Margaret Gunning at 9:57 AM No comments: