You already know I have a great fondness for Pream commercials. I've devoted entire posts to the product. Somehow-or-other, mysteriously, it was discontinued some time in the 1960s. Somewhere on the internet I read that it didn't dissolve properly, and if it truly had milk solids and butterfat from cream in it, it would eventually go bad.

But this commercial, and the following two gifs made from it, are from Pream's glory days. This transcends even the sublime "Pream or Cream?" ads that went on for ten or fifteen years.

Now you tell me. Can a cow's udder do something like this? What about gravity - isn't the milk supposed to go down, not sideways?  And how did that pail get so full? I'd offer multiple choice answers, but. . . no, I don't think so.

POST-POST OBSERVATIONS. It was frustratingly difficult to find any information on the demise of Pream. After all, the stuff was around for nearly two decades, then suddenly pulled from the market, never to return.

I found something listed on Amazon - one of those books you can pretty much read in its entirety on the site, so who'd buy it? - called Better Than Homemade: Amazing Foods that Changed the Way We Eat by Carolyn Wyman. Just by the title, you know she's pro-amazing, anti-natural, and in favour of the New and Improved. 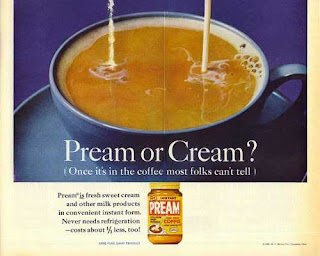 The book had a little bit about Pream, and a lot about its successor. "The first powdered creamer to hit supermarkets in 1952 was called Pream. It was made of dehydrated cream, milk sugar, and nonfat milk solids. In other words, it was the real deal. But the processing required to dry it made it taste terrible. And the proteins in the milk made the product spill out in unsightly clumps."

Most of the entry is about Coffee Mate, the one that Changed the Way We Drink Coffee. It was touted as an "amazing discovery" that "eliminates the stale cooked taste of old-fashioned powdered creamers."

"Stale" and "old-fashioned" were the inverse of New, Improved, and Amazing. It's hard to believe Pream tasted THAT bad, implying that all those hundreds of ads where hubby or wifey couldn't tell if it was "Pream or Cream" were lying. I have read on other sites that the product wouldn't dissolve easily (not a problem with the filtered crank-case oil that is Coffee Mate) and left a film floating on the top. It's hard to believe that a product made of milk solids wouldn't eventually go bad or at least become stale-tasting. Coffee Mate is so processed that you can't really tell what it is, a desirable state for the manufacturers. After a while, real cream is an offense to you. You simply don't want something out of a cow's udder any more.