Phone booth in a briefcase!

I keep coming back to this ad over and over again, because of all the wheezy, hoary, creaky, hopelessly out-of-date cell phone ads I've ever seen, this is the Big Kahuna. It's an ad for a cell phone with a cord. Right!  A cord, and a big thing like a suitcase that you cart around with you everywhere. The convenience! The innovation! Why not just find a fucking PHONE BOOTH?? But I digress.

It's fun to see people exclaiming over magical inventions that will be worthless piles of shit in a couple of years. The thing is, nobody knows at the time. The next step up from this monstrosity was the "brick" cell, about the size of a shoe box. No cord on this one, and not even a suitcase to lug around, a huge leap in technological sophistication. The ad bragged that it weighed "just thirty ounces", which is just short of TWO POUNDS. Next time you lift a two-pound bag of Ken-L-Ration and put your back out, think on these things.

My own tech development was frozen around 2003, which tells you a lot about this blog, and the fact that my phone, while Smart, can't do too many things. And if it can, I don't know what they are. Because I simply don't care.

I feel the same dismay about people constantly phoning and texting that most other "something-somethings" (my age) do. It seems like an excuse never to talk to anyone. I never text because it's dumb, and hate the phone, only use it if I absolutely have to. I'd use it if I were dying or flat on my back and needed 9-1-1, but with my luck I'd forget how to turn it on. I'm not saying that's good, in fact I realize as I write this that it makes me look seriously backward. But I do wonder about the social skills of the kids who are coming up now. Will they in fact have any? Will they speak, if they speak at all, in tweets (how r u?). Will the vocal cords eventually atrophy and become as useless as the tonsils or the appendix?

(I just had a horrible vision of everyone carrying around those Stephen Hawking synthesizers so they won't have to actually speak. It will truly be an egalitarian society when everyone sounds exactly the same. And who needs emotions, those messy old things? That tinny monotone can sound mighty romantic late at night.)

The other day on Facebook I saw an argument between educators as to whether or not we should bother to teach cursive writing to children in school. They won't be using it, will they? Who uses a pen these days, it's all done on your phone, and even if you have to - what's that called again? Write script with a pen? What's wrong with block capitals anyway? They were good enough for Grade Two, and weren't we all really at our best at age eight? It's beginning to seem it's as smart as most people are ever going to get.

I realize I'm hopelessly out of touch and devolving into some sort of curmudgeonette. But taking away cursive writing while still teaching physics and trigonometry seems somehow wrongheaded. School has never taught kids what they will actually need to know in life, which is how to handle a job interview, how to draw up a budget, how to grocery shop and cook for a family, and (my God!) interpersonal skills like how to hold a marriage together. (Marriage counselling in school? My God! That means they might want sex!)

Whatever tribe of Martians gets to decide what kids will learn in a school curriculum, their chief aim must be to choke a child's brain with so much stultifyingly irrelevant crap that they will stop learning permanently and thus become a more productive, non-thinking member of society. This is extremely useful in that it softens them into the hands of capitalism. Whatever nub or larval stump of intelligence may still be squirming in their numbed cortex, technology will quickly and efficiently exterminate it.

Along with all this, I had the most awful thought. If the movement to extract and exterminate the human soul with technological innovation is taken to its extreme, kids won't even need to learn how to sign their name any more. Some sort of retinal scan will do the job of identification, and can't be forged. Unless someone learns how to fool the system and use someone else's retinas. It's done all the time with urine samples. Hey officer, I didn't do it! It was that guy over there, see? The one with the guilty look in his eyes.


(I won't, WON'T take this a step further, to those microchips they'll soon be implanting so that we can all communicate telepathically. There won't be a way to NOT listen, to block it out, because the messages will be broadcast in a constant, unintelligible babble. Think what that would do for Donald Trump.)

Posted by Margaret Gunning at 10:58 PM No comments:

If you can remember this, you're old. Yes, OLD old. But given how dreadfully hackneyed TV dramas could be in the '60s, this one was fairly memorable. It's hard to forget the chalkboard symbols, with Sam Jaffe intoning those five whatdaya-call'ems, the great fundamental truths of Whatever.

And this startling opening, which they changed after the first season (unfortunately!). It gave the whole show a sense of dynamic tension, of emergency, of things happening, a no-nonsense kind of environment echoed in the snarky cynicism of Vincent Edwards: he of the world-weary pronouncements, hairy forearms, sweaty scrubs and shiny Italian greaser hairdo. And the diagnosis of subdural hematoma which he gave every week, to everyone.

Of course I was far too young to Get It about Ben Casey, or Dr. Kildare either, for that matter. Back then, you were either Casey or Kildare: you couldn't be both. To be both was to be gutless, to be sitting on the fence, to be bisexual, or even asexual, and that simply wouldn't do.

There was no doubt in my mind that I was Casey, though I was just a kid when the series began, maybe not even ten years old. I certainly didn't sit there watching it every week. In fact, I only began to watch it attentively about six years later, when a channel in Detroit began to rerun them after school. Then I began to realize that I'd been right all along, Casey was it, he was The One. 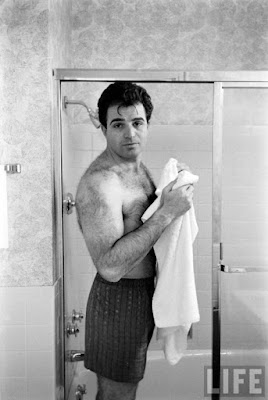 I had some idea by then about the hairy forearms and Easter Island impervious mug and smoldering eyes, how that might appeal to someone sexually. Richard Chamberlain had fallen into some sort of void at that time, only to emerge years later in the '80s in The Thorn Birds. And yes, I fell right into it, even though when I tried to watch the series a few years ago on DVD I could not believe how lame it was.

I must have watched Dr. Kildare at some point, though all I can remember is one episode about a brain-damaged man who could only utter one word: "Damn. Damn. Damn. Damn. Damn." This was considered extremely provocative for the era. By the end of the show, he could also mutter, "Wife", which must have placated the censors somewhat.

The Kildare show was just too soft. It wasn't just Chamberlain, it wasn't his fault he was beautiful rather than handsome. Like the hyper-romantic theme song, the one with the strings and the chimes, the show just had no dynamism about it. It was too sentimental by half. Raymond Massey did a good job as his mentor, though he was no Sam Jaffe. Sam Jaffe always charmed me, because he looked like something straight out of Dr. Seuss.

So! Casey and Kildare. They stir strange, disparate, completely meaningless memories. For some reason I remember an odd little song from the schoolyard, something about Dr. Kildare sung to the tune of Take me Out to the Ball Game. A girl named Nancy sang it, because nobody else knew the words. As is always the case with these things, I remember about two lines. "It's boo, boo, boo for Ben Casey. .  .And it's one, two, three vaccinations with Dr. Kildare!"  I haven't heard a trace of this song since, and I now think that Nancy must've made it up. 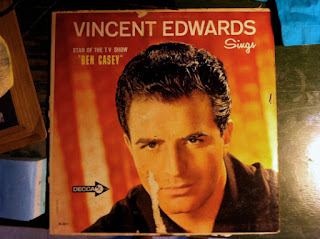 There was this other thing, oh this one other dumb thing, and I don't even know who the two singers were, I just remember the ONE line: "With Ben Casey and Kildare, you have a PARADOX." Ay. Paradox indeed.

There's just one more little bit and I'll stop. Bill and I seem completely different on the surface - temperament, interests, etc. etc. But I will tell you that underneath that surface, we are identical.

One day, some 40 years after I married him, I looked at him across the dinner table and asked him the question that would determine whether I had married the right man, or made a big mistake.

He looked at me with a surprised expression on his face and said, "Casey."

I think he was a little hurt that I needed to ask.

POST-BLOG BONUS! The facial expressions of Vincent Edwards. Some sort of knockoff of The Method, obviously, but he missed the class called "emotion".

Life is really too much: the delicate poetry of Donovan


Posted by Margaret Gunning at 11:25 AM No comments: