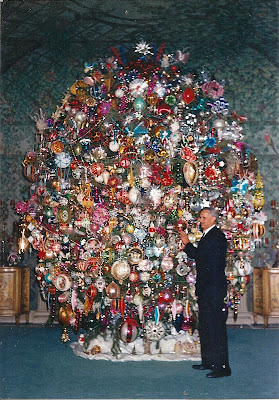 All right, I guess I've put this off about as long as I can. It's time to deal with the little issue of Harold Lloyd and his Christmas tree.

Harold was a Christmas fanatic. He was a fanatic about a lot of things, including painting, handball, microscopy, the Shriners, and beautiful women with no tops on. But let's stick to the Christmas tree for now.

When he was a boy, growing up dirt-poor in Nebraska, they probably had something - you'd have to be pretty impoverished not to be able to cut something down in the woods, drag it home and decorate it with some paper garlands and strings of popcorn.

But once he was in the chips, Christmas took on a whole new meaning. 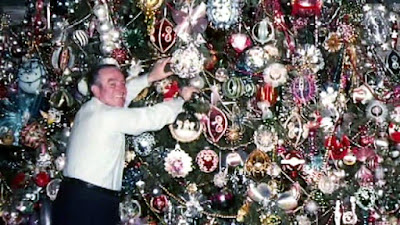 I sometimes get a mental image of Harold rolling around in dollar bills and throwing them up in the air, not because he was greedy (though he was apparently a lousy tipper), but because it was fun to have money at last.

Never again would the family have to skip out in the night to avoid paying rent that they didn't have.

As you can see here, some of these ornaments were absolutely huge. Most were handmade European things that remind me of Faberge eggs. Over the years he amassed an incredible 10,000 ornaments (hard to believe, but this is Harold Lloyd, folks, and he never did things by halves), most of which were kept in a vault somewhere in his huge estate, Greenacres. 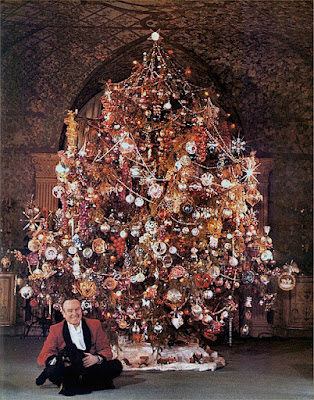 It took weeks for him to decorate this thing, which was constructed from three gigantic fir trees lashed together. Then one year when he was about to dis-assemble it, he decided, ah, hell, isn't it really Christmas all year long? So the tree stayed up.

This pose with a red-jacketed Harold is obviously an earlier incarnation because you can still see parts of the tree. It doesn't have that bulged-out/pregnant/I-think-I'm-going-to-explode look it took on in later years.

In fact, this tree looks really nice to me. Has a nice shape, a nice sparkle, and TONS of ornaments already. But Harold never knew when to stop. 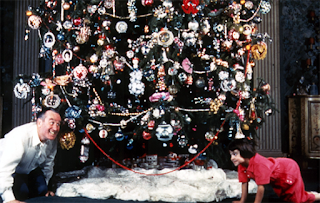 The little girl in the red pajamas is Harold's granddaughter, Suzanne, now keeper of the Lloyd legend. Due to family circumstances, Harold was like a father to her, and it must've been fun to have a grandfather like that, even if he was hard to keep up with. This surely must have been taken in the middle of the decorating frenzy, given the appearance of the tree in the first photo. 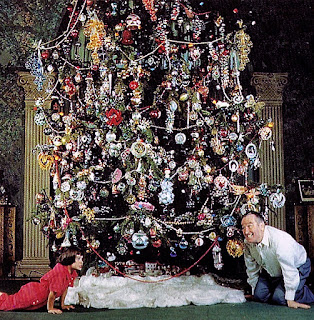 It always strikes me that the great geniuses of the world are little boys who never grow up. They retain that mental flexibility and ability to dream and actualize those dreams without adult restraints. They also retain temperament and a degree of childishness, which Harold did. He had a hairtrigger temper by all accounts - hey, folks, I learned that from Kevin Brownlow's superb documentary Harold Lloyd: The Third Genius, a major source of information for my research, and it was Harold's brother-in-law who said it. I'm not just making up stories. He really did have flaws. I say this because I sometimes wonder if I somehow inadvertently pissed off someone in the Lloyd family by portraying him as less than perfect in my book. At any rate, the silence from them has been deafening. But as I've said before, Kevin Brownlow has been wonderful to me, so maybe I'd better be happy with that. 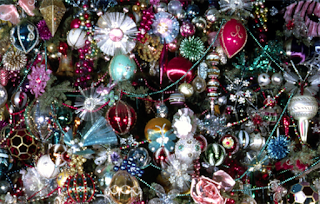 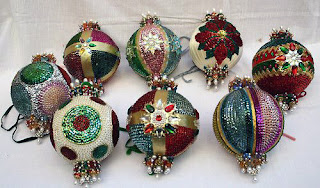 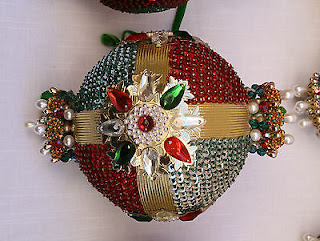 It's still possible to buy some of those 10,000 ornaments today. In fact, they're listed on eBay right now, eight ornaments for $2500.00 USD.  That's uh, three hundred and. . . that's lotsa money per ornament. Eight would be about enough for my tree.

POST-POST POST: As you well know, Wikipedia is my Bible, especially when I don't feel like plodding through a dozen web sites for information which may or may not be right. It's a sad and poignant story, what happened to Harold's estate after he died in 1971. The upkeep on the gargantuan place was basically unworkable. The huge lot had to be subdivided and sold off in parcels in the '70s, but the house still sits on top of the hill in Benedict Canyon, somewhat updated from its falling-down days. It's nice to know it's still there and being looked after.

Several movies were shot at Greenacres in the '70s, including a Lylah Clare-ish, Sunset Boulevard-esque, cheesy TV movie called Death at Love House with Robert Wagner in it (Harold's close friend), but the video clips I could find were so Godawful I could not include them here. I couldn't even make a decent 3-second gif.

Plans for preservation and a museum 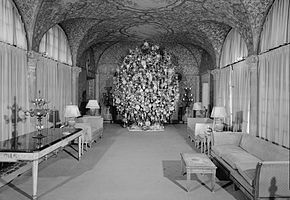 Lloyd left his Benedict Canyon estate to the "benefit of the public at large" with instructions that it be used "as an educational facility and museum for research into the history of the motion picture in the United States." For a few years the home was open to public tours, but financial and legal obstacles prevented the estate from creating the motion picture museum that Lloyd had intended. Among other things, neighboring homeowners in the wealthy community were opposed to the creation of a museum hosting parties and attracting busloads of tourists. 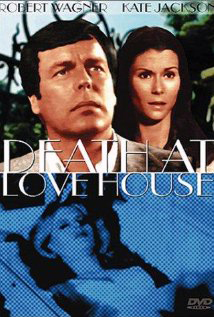 In October 1972, the Los Angeles Times visited the property and noted that it had "the feel of Sunset Boulevard," bringing to mind the line spoken by the young writer when he first visits Norma Desmond's home: "It was the kind of place that crazy movie people built in the crazy 20s."The house appeared to visitors in the 1970s to be frozen in time at 1929. One writer noted that nothing had been moved or replaced, changed, or modernized, from the books in the library to the appliances in the kitchen and the fixtures in the bathrooms. 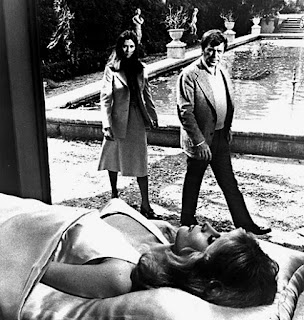 Noted columnist Jack Smith visited the estate in 1973 and wrote that "time stood still", as Lloyd's clothes still hung in his closet, and the master bedroom and living room "looked like a set for a movie of the 1930s." A Renaissance tapestry presented to Lloyd as a housewarming gift by Mary Pickford and Douglas Fairbanks was still hanging in the hallway.

The house also had Lloyd's permanent Christmas tree loaded with ornaments at the end of a long sitting room. Jack Smith described the tree as follows:

"At the end of the room, dominating it like some great Athena in a Greek temple, stood the most fantastic Christmas tree I had ever seen. It reached the ceiling, a great, bulbous mass of colored glass baubles, some of them as big as pumpkins, clustered together like gaudy jewels in some monstrous piece of costume jewelry." 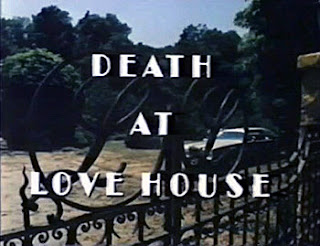 POST-POST: I just thought of something else. As usual! Somewhere, I know not where, I read in my research that there was a TV special called Citizen Lloyd which aired shortly after Harold's death. There was scant information about this, but I can't help but see the title as an allusion to Citizen Kane and Xanadu, the great echoing mausoleum inhabited by Charles Foster Kane. Parallels have also been drawn to Sunset Boulevard with its algae-choked swimming pool and demented German manservant with the duelling scar.

Though Harold never employed Eric von Stroheim to look after the place, there is an eerieness to all this. Perhaps it's Stroheim's ghost that haunts Greenacres. I know Annette Lloyd got to tour the place at some point, and I never will. I'll die before that happens. In spite of all my efforts to flog it, the book I toiled over for seven years has fallen off the face of the earth. Except for wonderful Kevin Brownlow, no one connected with the film industry has shown the slightest interest in it, or in helping me actualize my dream.

A few years from now, I have a feeling "someone" will make a movie about Harold Lloyd, and it will have all my ideas in it. There are enough copies circulating, all of which seemed to fall into the Grand Canyon without an echo. And because I am so utterly powerless, there will not be a damn thing I can do about it.

But I wonder what happened to that TV special, if someone still has a tape of it moldering in their basement and will some day decide to put it on YouTube.

Stranger things have happened. But not much.

Posted by Margaret Gunning at 1:08 PM No comments:

A tribute to Robert Loggia

Posted by Margaret Gunning at 11:52 AM No comments: