Here she is. . . Miss Muybridge

This is becoming extremely addictive. Though it's a tedious process reassembling Muybridge's multiple images, look what happens when they're put back together in sequence! As with the others, I took the sheet of tiny black-and-white pictures, copied it a zillion times, cut the pictures apart into individual frames, then ran them in sequence in my gif program to create animation.

Whoever this model was, this young woman who died over 100 years ago, here she is alive and moving again. And this was long before the conventional movie camera came along. This was merely motion study achieved through the use of conventional still photography. Reassembled, however primitively, into motion again. 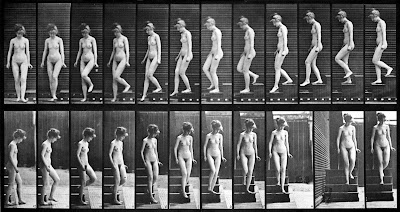 As with any gif, before they drive you completely nuts, they reveal a lot because the eye picks up on things you would normally not notice. Note that she isn't moving her arms. They seem very stiff, in fact. One wonders if Muybridge has told her to keep them at her sides, or if she's just feeling uncomfortable walking around nude in front of a dirty old man with 100 cameras. Women then were suffocatingly over-clad in skirts, corsets, petticoats, bustles, pantaloons, and whatever-the-hell-else-they-wore. Their bodies were conditioned to carry both weight (of clothing) and bulk, length. Restriction was the norm. And being completely covered up. The average modern woman would probably feel self-conscious walking around nude in front of a camera, so imagine how difficult it must have been for a Victorian girl. I note also that her head is, while not down, then not exactly up either. Modesty was a very big thing then, and holding her head up while nude would be unseemly. It moves stiffly along with the rest of her as she executes her awkward turn. 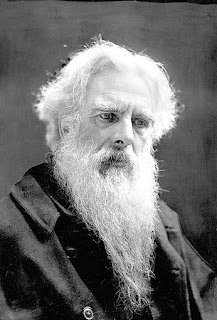 What amazes me about these things is how few frames there are, yet what a relatively fluid sense of motion results, without the expected jerkiness. I am not sure what that is about. I know movie film is an illusion, just a series of stills, but this - man, this is primitive! Is it my imagination, or is there something in her left hand? And what? I get the eeriest sense I know her, that I know something about her just from this captured crumb of time. What would cause her to do this type of work, and do her parents know about it? Or are they in on it, perhaps? Muybridge had his dogged followers, and men got away with scandalous things during the Victorian era. It was a time of great hypocrisy, with prostitution rampant, along with social diseases. A powerful man like Muybridge could easily get his hooks into any number of tender young maidens.

When you look at his studies of women, they all seem to look the same - slim, small-breasted and (shockingly) young. Some look to be teenagers. Were they doing this in the name of science? For a lark? For a few bucks? To say they'd done it? For whatever reason, they did it, they bared their waxen-looking bodies for posterity, executing stiff and self-conscious turns that they probably couldn't imagine would still be looked at more than a century later. (And could they even imagine the concept of a gif? Perhaps Muybridge could.) 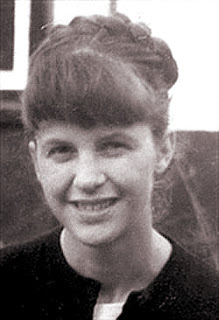 As I endlessly copied and cropped this oddly unbending young woman, I kept seeing Sylvia Plath. Don't know why - the hair, the face. The attitude of oppression and defeat, and mixed in with it, naked defiance.

As usual, as always with these things, there is More. Much as this may look like one of those 78 rpm records from my early childhood, it is in fact a Muybridge gizmo (that's the technical term) used in tandem with his odd stop-motion photographs. 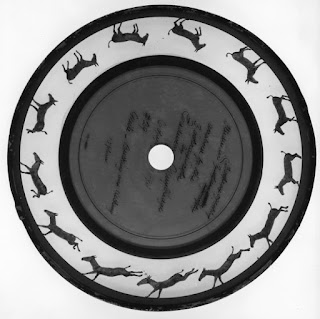 I wasn't going to get into the zoopraxiscope because it sounded like something you might use for a rectal exam, but it's worth mentioning because as it turns out, Muybridge did develop a primitive means of projecting his photographic images. It was done in a cumbersome fashion, and the resulting "movies" must have been only a couple of seconds long, but to Victorian audiences it must have been a marvel.

"The zoopraxiscope is an early device for displaying motion pictures. Created by photographic pioneer Eadweard Muybridge in 1879, it may be considered the first movie projector. The zoopraxiscope projected images from rotating glass disks in rapid succession to give the impression of motion. The stop-motion images were initially painted onto the glass, as silhouettes. A second series of discs, made in 1892–1894, used outline drawings printed onto the discs photographically, then colored by hand. Some of the animated images are very complex, featuring multiple combinations of sequences of animal and human movement." (Wikipedia)

In the following years all kinds of people (all of them men) worked on the principles of photographing/projecting moving bodies. Thus came the kinetoscope, the mutoscope, and any number of other scopes (not to mention the zoetrope), but Muybridge was ahead of the game, not so much inventing the study of motion but developing it to the point that he made a significant contribution.

Besides that? You have to credit the man with this: he (quite literally) got away with murder. 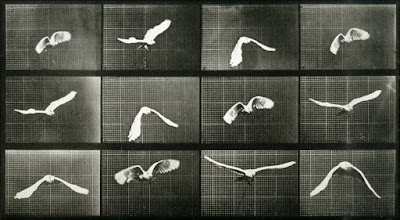 So here is the challenge. I've been experimenting with making little animations, flip-books or whatever you want to call it, on my gif program. Easy enough to do, but the only photos in sequence I can find are Muybridge animal/human studies.

So what you do is start with this, a whole lot of small black-and-white photos on a gridwork background.

Then you start copying them. You'll need, for this one, only twelve copies. Then you crop out each individual photo from the sheet, and number it.

And what you finally have is:

Not the smoothest animation, but flight is harder to capture somehow. A running animal seems to give the eye a sense of continuity, so that we fill in the missing frames. This one, well. . . It doesn't have the continuous motion of a horse running along a track, that sense of endlessness, since flight is so erratic and moves upward. But all things considered, it was a pretty boring and nearly pointless exercise in Muybridge animation.

Should I try a little naked running man, next?

Posted by Margaret Gunning at 10:12 PM No comments:

The Muybridge jumping horse: look what I did!

This was an experiment in Muybridge animation, which is certainly not a new idea. Most of the Muybridge photos display all the frames consecutively, which is (I think) the way most people would view them. Putting them together into a sort of primitive motion picture came much later.

Well, this is my attempt, and a pretty good one I think, at taking one of these sheets of tiny photos - this one, to be specific:

The motion here is actually not too bad. The square photos made the cropping less tedious than you'd think (considering I had to do it 12 times).

But there are some strange things about this little photographic cartoon from the 1880s. The fact that the rider appears to be nude isn't so unusual, nor is the fact that he's not using a saddle. Muybridge liked his models (male or female) to show lots of skin, not for prurient reasons but to display natural skeletal and muscular movement without impediment.

No, it's that jump. The horse seems to jump over it before it appears. Something strange going on here. People often accused Muybridge of "fiddling", tweaking his images somehow to impress the public, and he really wasn't a scientist or an inventor - not at the start, anyway. But then, neither was Edison.

Maybe it's just the way I'm seeing it. Maybe it's the way I cropped the photos (but since they were all perfectly square, that part of it was relatively easy).

Anyway, I was all set to go watch TV or go on Facebook or do some other moronic thing, when I looked at the Muybridge images again and noticed how many exotic animals he had forced to walk through all those elaborate tripwires. Including. . . one of my favorite animals of all time, the capybara!

Yes, the Muybridge capybara. This is what I found: 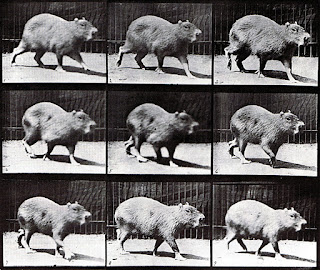 This is what the photos looked like, copied and cropped apart 4" x 3": 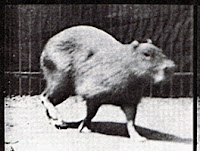 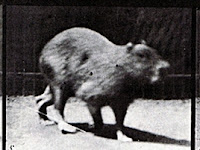 . . . and here is the finished gif, spliced together by my magic Makeagif program:

He's a little drunken, a little wobbly, but then he's about 130 years old, and photographed with the most primitive equipment imagineable. And it's really not bad, for only nine frames a second.

Posted by Margaret Gunning at 4:10 PM No comments:

Posted by Margaret Gunning at 2:30 PM No comments:

Email ThisBlogThis!Share to TwitterShare to FacebookShare to Pinterest
Labels: 2015, Justin Trudeau gif, knowing what year it is

One of those bored/boring days

I never do this, I mean make gifs out of still photos, mainly because this is the slowest speed I can display them in. But I've found a whole lot of interesting cloud formation pics - I told you it was a bored, boring day, a relentlessly dark Vancouver-rainish day when I don't want to get out of my fleece nightie and knee socks EVER (and might not, though I am not sick).

I have seen blobs of rainbow in Hawaii, while driving down the road from Hana, and I actually thought I was seeing things because I didn't think rainbows "came" that way. These were strange globes of colour that seemed to be snagged between bright cumulus clouds. A little rain was falling from somewhere. Some of the rainbow blobs appeared to be sitting on the ground, or perhaps on the side of the mountain. It was weird. Now I know a whole lot of things are possible, though I refuse to go into meteorological explanations as to what's happening when you see a funny-looking cloud.

I should do a bunch of these, why not? It's raining too hard to go out.

Posted by Margaret Gunning at 1:51 PM No comments: