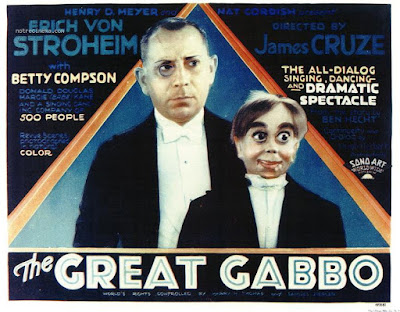 The weird shit I find late at night! There seems to be no end to it. I'm now on a search for very early talkies, most of them made in 1929. That was the change-or-die year for most movie studios and their stars. Erich von Stroheim had a great villain's voice, heavily-accented, and would have come into his own and been a huge talkie star, except for the fact that he was (with the exception of Adolf Hitler) the nastiest man who ever lived. I think his personality was just too thuglike and violent to appeal to anyone. Even Peter Lorre wore eyeshadow, which seemed to soften him a bit.

I love the noisy soundtracks on these 1929ers, the thumps and thuds, the ringing sound (?) and whirring, no doubt the sound of the camera. To solve the problem, someone had the idea of enclosing the camera/man in a soundproof booth, with the result that he could only work for 10 minutes or so before falling into a gasping, sweating faint. When someone realized you only need to put the camera in the soundproof booth, it was a great day for technology.

I made a ton of gifs of this wonderfully awful thing because it was one of the first examples of that now-stock character, the devil-doll with a life of its own. This was imitated and/or elaborated-upon in various movies and Twilight Zone episodes. It has always puzzled me why a grown man wants to shove his hand up the back of an artificial boy and make his mouth move, but never mind. It is very late at night, so I should not get into how anatomically correct the dummy would have to be.

And now it gets straaange. Here, the Little Wooden Boy discourses on something-or-other (who cares anyway? This would've been better as a silent), while at the other end of the table his master, looking like he's attending an SS banquet, calmly shoves food into his mouth. The marvel being that the little squicker can move his mouth and talk WITHOUT a hand shoved up his back. And can yatter on even though Stroheim is putting away the bratwurst like there's no tomorrow. So he can make his boy talk even with a sausage in his mouth. All done by mind control. They teach you this in Nazi training camp.

Yes. This guy makes Peter Lorre look like a pussycat. I can't think of anyone more evil in the movies. Not sure what happened to Stroheim - will have to look it up. He belonged to a certain time/sensibility, and reminds me of the German expressionists, Bertolt Brecht, and that infamous and oft-parodied painting, The Scream. Or maybe I just want to scream when I see him. I also think of Harvey Korman's dead-on impersonation of him in Carol Burnett's sendup of Sunset Boulevard (the last movie he appeared in, I think, in 1950).

Ah, his love-hate relationship with his dummy, his Instrument, his thing. No doubt an extension of his poor nasty self. The dummy probably didn't feel very much, though he's the kind of conversationalist I'd like to sit across from at my next dinner party. Note that Stroheim's acting style is quite "silent film-ish", his punches very pulled. There is a slowness here too, with pauses that take forever.

It took several years for Hollywood/actors to figure out how to DO sound films. Most pictures from 1929 were packed with high-kick, early-Busby-Berkeley-style production numbers, and this one is no exception. These have nothing to do with the main plot. Early talkies were very static in the dramatic scenes, the actors hunched around a stationary microphone hidden behind a potted palm. No one had yet figured out the concept of the sound boom. The dance numbers were no doubt added so the audience could see something MOVE once in a while.

The stars who burst to the forefront in this tenuous, genre-shifting era were people like Cagney and Garbo and Edward G. Robinson, with quirky voices that stuck in the head. Stroheim's voice was malignantly nasty, and creeped people out too much for them to pay to listen to him for two hours. He did however direct a monster of a film called Greed which, in its first cut, ran to 10 hours. I think Turner Classics is showing it next week in its entirety, with a 58-minute introduction by Robert Osborne.  (I plan to post my 90-second gif version in the very near future, or not, since I think my gif program just collapsed.) Having sat through 10 hours of Greed, one critic commented that Stroheim was "a genius. . . badly in need of a stopwatch." Or an on-off switch.

The dummymeister, predictably, goes nuts. My favorite part is all the chorus girls running away from him. The dummy swings from his hand like a useless appendage. In another scene he drags it around like Linus's blanket, the head bumping along behind him. This man is beyond unpleasant. He is EVIL, and though audiences seemed to dig it during the silent era, his talkies did not burn up the track. He went into a long and predictably bitter decline until Sunset Boulevard, which starred another great silent movie relic, Gloria Swanson, along with sad-faced Buster Keaton, who always seemed to be trying to make the best of a bad deal.

POST-SCRIPT. And don't tell me he was Austrian. They ALL say that.

Posted by Margaret Gunning at 11:15 AM No comments: