The Davis Motorcar Company was an American automobile manufacturer based in Van Nuys, in the San Fernando Valley region of Los Angeles, California, which produced three-wheeled automobiles from 1947 to 1948. In total the company produced 15 to 17 vehicles.[1]

Founder Glenn Gordon "Gary" Davis (d. 1973) acquired a prototype called "The Californian" from designer Frank Kurtis, who built it for millionaire racecar driver Joel Thorne.[1]
Davis operated in a 57,000 sq. ft. former aircraft assembly building in Van Nuys, where a prototype three-wheeler named "Baby" was built. Baby was powered by a 47 hp Hercules 4-cylinder engine coupled to a Borg-Warner 3-speed transmission and Spicer rear end. Baby was unique in that it featured four-across seating. It was planned that production, beginning in 1948, would start at a minimum of 50 cars a day later increasing to 1000. A second prototype called "Delta" was built, and a third prototype, the model 482, was completed later. The third model, the "Divan", established standards for the production Davis cars.

The company closed down in 1948, as workers and engineers were not being paid, and lawsuits were threatened by investors and dealers. Former employees then filed suit for back pay, and the company was investigated on allegations of fraud. Soon after the Davis plant was shut down, Gary Davis was convicted on 20 of 28 counts of theft (he was acquitted on four counts of theft and four of fraud) and was sentenced to 8 months to two years in jail.
Davis developed a variant for military use. The Model 494 was a Jeep-like version of the Divan with an open body. Arrangements were ongoing with the Pentagon to run tests at the Aberdeen Proving Grounds in Maryland. Ultimately three 494s were built in less than a week, two of which were shipped to the Army for testing. 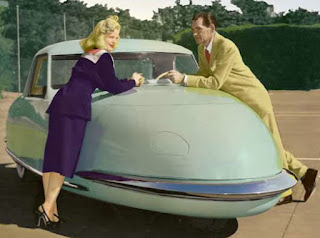 There's a surprising amount on the internet and YouTube about the 1948 Davis Divan, making me suspicious that these are recreations based on existing blueprints or plans or whatever-it-is-they-call-those-things-you-use-to-make-a-car-with. Doesn't it make you suspicious that the number they say they manufactured is so imprecise? Well, what WAS it - 15, 16 or 17? I want to know! 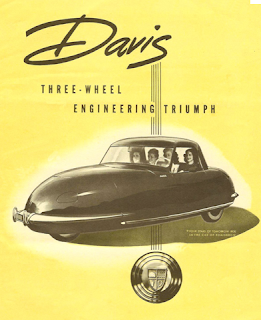 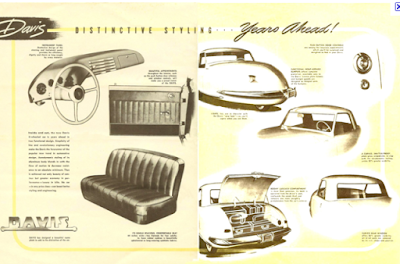 And if so few were made, why did I find so many pictures and videos and stuff, including a whole half-hour YouTube video of Jay Leno driving one around in Van Nuys, wherever that is? I didn't watch it cuz it looked pretty boring, and I don't like Jay Leno and am glad he's gone. The little clip I found of the Davis at a car show (which I turned into a gif, the green one on the green grass) had an announcer claiming the idea of the car came from Howard Hughes. My ass it did. Howard Hughes was too smart to invest in a company that lasted barely a year, spat out 15 cars or so, and sank in a quagmire of lawsuits and jail sentences. 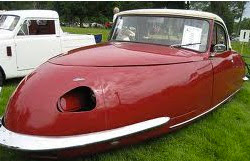 The little bit at the end of the Wiki blurb says something about developing a prototype for the military, but I find that even harder to swallow, unless they wanted a car small enough to fold up and store in an officer's kit bag or whatever it is those guys cart around with them when there's a war on. 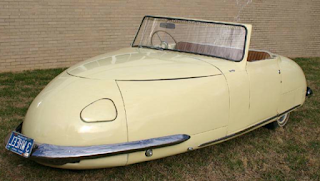 To me it looks a bit like Ollie of Kukla, Fran and Ollie, a friendly dragon puppet with big nostrils. I always think it looks like cars have faces. They have faces coming, and they have faces going. This one is more strange than any I've seen.

POST-BLOG GLOB: As usual, I've found out some more about this subject. No doubt if I kept digging, I'd keep finding more. Books may have been written about it, but I'm almost afraid to find out: all I need is another obsession in my life. This Gary Davis guy was either a visionary with a brilliant plan to revolutionalize the automotive industry, or a crook out to bilk as many people as possible. (Bilk has nothing to do with Sergeant Bilko, played by Phil Silvers whom I hate.) He convinced a lot of people to back him big-time and came up with a big splashy ad campaign, probably pre-selling a lot of vehicles which never materialized. He even jumped into the infant medium of television, featuring his car-of-the-future on an early police show. An opportunist, either brilliant or sociopathically crooked, there were whispers he was merely the puppet of the insane Howard Hughes. Surely he took the dive, as they say in boxing, for the short-end money (and the jail sentence).

Gary Davis envisioned Davis Divan dealerships springing up all over the United States and perhaps Canada, which is pretty hard to pull off if you have no cars to sell. The fact that so many of them still exist is curious, but hey, these cars never sold, as far as I know, and were either warehoused or bought up by someone who loves to collect curiosa. The more I think about the 1948 Davis, the stranger it seems: FOUR adults could sit next to each other on the bench seat, including, I guess, the driver, and I don't see how that could happen in a car that small. (Of course people were a lot skinnier in those days.) Nowadays we'd want to know the gas mileage, and if it could maybe be converted to electric or at least a hybrid. I saw many three-wheeled vehicles in my long-ago trip to Italy, but there was nothing glamorous about them: they were grubby little trucks narrow enough to get through laneways so skinny you could reach out and touch them on either side.

Will it blend? Find out, NOW!

Posted by Margaret Gunning at 10:19 PM No comments: